This week, Austin city leaders will take a closer look at what needs to change in the police department. 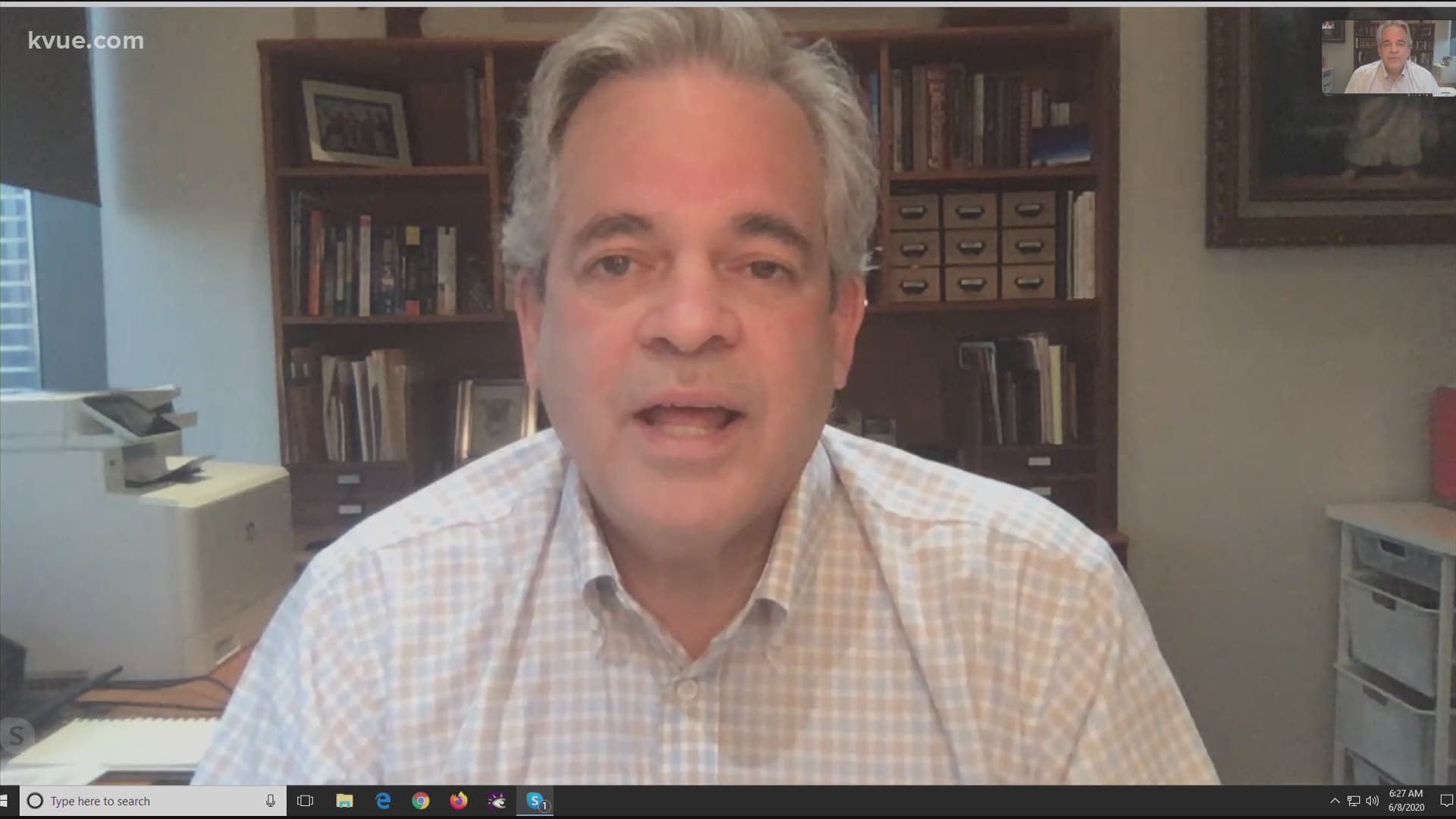 AUSTIN, Texas — There have been 10 days of demonstrations in the city of Austin as crowds continue to demand justice for the death of Houston native George Floyd, who died while in Minneapolis police custody.

People have also been protesting the death of Mike Ramos, who was shot and killed by an Austin police officer in April.

These ongoing events have city leaders asking questions and analyzing the police force.

Austin Mayor Steve Adler joined KVUE Monday morning as the Austin City Council is set to have major discussions later this week, including action on police reform. Here's what he had to say:

Adler said three of the "Eight Can't Wait" principles have been formally signed off by city council.

"So it's things like not using impact munitions ... tear gas on people that are just exercising First Amendment rights," Adler said. "It says that deadly force that can only be used in certain very limited situations. It includes things like prohibition against shooting into a moving car. It's trying to demilitarize police. It's taking a look at police recognizing they have a real important function with crime enforcement of our laws, but also trying to make policing work better in today's world."

"We were offered a grant to fund the detectives that are doing the work on auto theft recovery," Adler said. "I think that one of the things that the police should be doing is, is dealing with auto theft because there's some real important functions that police have. If we had not taken that money, we would have had to fund auto police detection, auto theft from somewhere else, which would have drawn money from somewhere else. We would have created a gap. We could still create that same gap if we wanted to and take money out of wherever it would have come from and put it towards something like mental health intervention. I didn't want to create the gap without having the opportunity to be able to put money to a use that we would want to have in the community. There was no more money put to the police budget by the action that was taken last week."

Adler also spoke on Michael Ramos, who was shot and killed by an Austin police officer in April.

"As I said the weekend when it first happened in those videos were shown ... very hard for me to look at those videos and explain what happened, justify what happened in those videos, which is why I think accountability and transparency purpose, it's real important that the district attorney is taking that matter to a grand jury," Adler said. "And I think that that's the appropriate thing to have happen and an important thing to have happen in our community. We need to make our police department better. There's a history in Austin of people, mostly people of color, that are dying or getting shot or getting killed in situations where the community looks at and says that just shouldn't have happened. Mike Ramos, I believe, should still be alive now. And I think from what I look at that video, I can't explain why that's not the case. So to her family, as I have said to her, we will provide the accountability and transparency to investigate that and to see that justice is done and to make sure that we're accountable for that."

With big crowds of protesters over the weekend, Adler addressed the police department's job handling the protests and also continued to double down on his concern about potential COVID-19 spikes amid the protests.

"We had really big crowds on Saturday," Adler said. "And Sunday was exciting to see so many people coming out and being involved in that movement. Although I will tell you, I continue to have real concerns about the virus and the inability to be of the social distance. I'm putting that aside. I think that there were much fewer incidents. I think there were only three arrests. And that is as it should be when folks in our city are trying to express First Amendment rights. There was less violence. There was less of the activity that resulted in many of the arrests. So, yes, I am pleased that the procedures and the decisions of protocols were changed after that first couple of days."

Over the weekend, Mayor Adler penned a letter reflecting on the events of the past week and previewing actions to be taken.

"The systemic killing of black Americans must stop," he said. "A peaceful, prosperous future together will require truth, reconciliation and accountability. We all have a role to play."

The letter can be read in full here.