Broussard's body was found inside the trunk of a vehicle at a Houston-area home where her daughter was found alive. 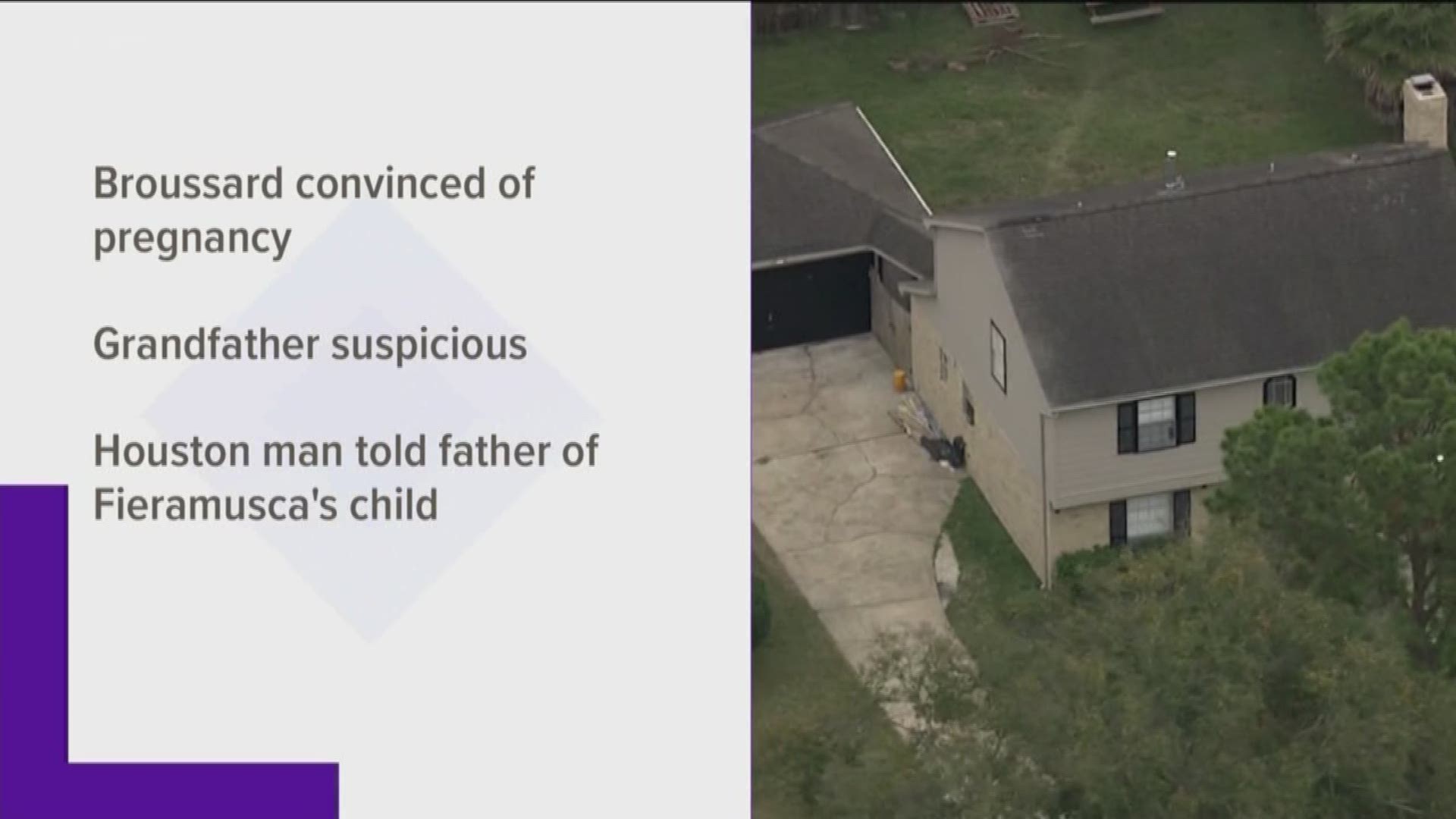 AUSTIN, Texas — Weeks after a missing Austin mom's body was found, KVUE has obtained an unsealed affidavit that includes new details about Heidi Broussard's death, including a tipster who saw her and her baby getting in a car around the time of their disappearance.

Broussard, 33, and her baby, Margo Carey, had been missing since Dec. 12. Sources confirmed to KVUE on Dec. 20 that Broussard's body was found in the trunk of a vehicle at a Houston-area home and that Carey was found inside the home alive.

Magen Fieramusca, who was reportedly a "close friend" of Broussard's, has been arrested in connection to her death. KVUE's Tony Plohetski confirmed Fieramusca had been plotting to take Broussard's baby leading up to the birth of Carey.

According to the affidavit, Fieramusca had conducted suspicious internet searches and was in the Austin area at the time of Broussard's disappearance.

The day after Broussard gave birth to Carey, Fieramusca drove from Houston to South Austin to see them, according to the affidavit. Broussard and her fiance, Shane Carey, reportedly gave Fieramusca a key to their apartment on Nov. 26.

Law enforcement sources had confirmed to KVUE in December that Fieramusca was pretending to be pregnant at the same time as Broussard.

A nurse at the hospital reportedly overheard Fieramusca talking to Broussard at the hospital about being 37 weeks pregnant, the affidavit said. Fieramusca then allegedly "interjected herself" and asked to hold Margo Carey as Shane Carey's father was holding her.

"Shane Carey's father was surprised by the actions of Magen Fieramusca and that his first introduction and time with his grandchild was interrupted by a friend of Heidi's," police said in the affidavit.

Fieramusca allegedly told Shane Carey that she would leave the key to their apartment on the counter, but Shane Carey said neither he nor Heidi were ever able to find the key.

Fieramusca stayed at Broussard's and Shane Carey's apartment until Nov. 27, the affidavit said.

On Dec. 8 or 9, Shane Carey reported that he learned Fieramusca delivered a baby girl, but said he did not see any pictures of the baby.

According to the affidavit, a person who lives at the same apartment complex Broussard lived in had video cameras outside of his residence that captured a vehicle consistent with Fieramuca's car driving at the complex around 9 a.m. on Dec. 12, the same day Broussard and Margo Carey went missing.

One witness said that on Dec. 11 or 12, she saw an adult white woman at the apartment complex carrying a small baby and walking towards a parked car. The witness reportedly told police she then saw another woman exit the car and greet the woman carrying the baby. The two women and baby then entered the car and drove away, according to the affidavit.

On Dec. 19, the witness was presented with a photo lineup that Fieramusca was in. Police said the witness was 60% to 70% positive that the woman she saw in the front seat of the vehicle at the apartment complex was Fieramusca.

A full review of searches between Nov. 11 and Dec. 18 revealed that some form of "Heidi Broussard" was searched at least 162 times from a device using an account that lists Fieramusca's name.

According to the affidavit, data from T-Mobile revealed that Fieramusca's phone was in the Austin area near Broussard and Shane Carey's apartment on Dec. 12.

Authorities then began conducting surveillance on the Houston-area home where Fieramusca was living. Officials said they found her car parked in a way that appeared to be an attempt to hide it.

Officials followed the owner of the home and interviewed him, the affidavit said. When they showed him a picture of baby Margo Carey, the man said he thought it was the same baby living at his house.

“That’s the baby at my house,” he told police when they showed him the picture.

The man explained to officials that he and Fieramusca had broken up in March and that he had never seen her bare stomach during her pregnancy. The man added that he noticed Fieramusca's stomach grew during the year and that he felt her stomach, which he described as hard.

According to the affidavit, the man believed Fieramusca was pregnant with his child.

Fieramusca allegedly said that, on Dec. 12, she left to go to the beach with a cousin.

When Fieramusca saw the man she was living with on Dec. 13, she told him, "Don't be mad, don't be mad," the affidavit said. That's when Fieramusca reportedly told him there was a baby on the bed.

Fieramusca allegedly said that she went into labor and delivered their baby without the man's knowledge. She reportedly told a Texas Ranger that she went into labor on Dec. 12, but could not remember the name of the birthing center in which she reported giving birth at. Fieramusca added that the only people present during her delivery were the employees of the "birthing center."

On Dec. 19, officials searched the home where Fieramusca was living in, according to the affidavit. When investigators arrived, they reportedly smelled the "unmistakable odor of decomposing flesh" emitting from the trunk of a vehicle parked at the house.

The body was later reported to be that of Broussard's. According to the affidavit, the body was shoved into a black duffel bag.

"Magen Fieramusca abducted Heidi Broussard by restraining her and preventing her liberation by holding her in a place where she was not likely to be found; specifically inside a black duffel bag in the trunk of a parked vehicle," police said in the affidavit.

"[Attorney] Jackie Wood and I are anxious to review the evidence collected thus far and have many of the same questions you do. Those accused, as well as the public at large, understandably want swift and certain answers from our criminal justice system. We call upon patience and resisting the rush to judgment until all the facts are in. The cursory information contained in the recently released probable cause affidavit is nothing more than mere allegations. As with every American accused of a crime, unless the State has proven these allegations beyond any reasonable doubt, Ms. Fieramusca remains innocent."

The Travis County District Attorney's Office said this is a pending case and they have no comment in response to Erskine's statement.