The MLS team said that, as of now, they're continuing on pace for completion by spring 2021. 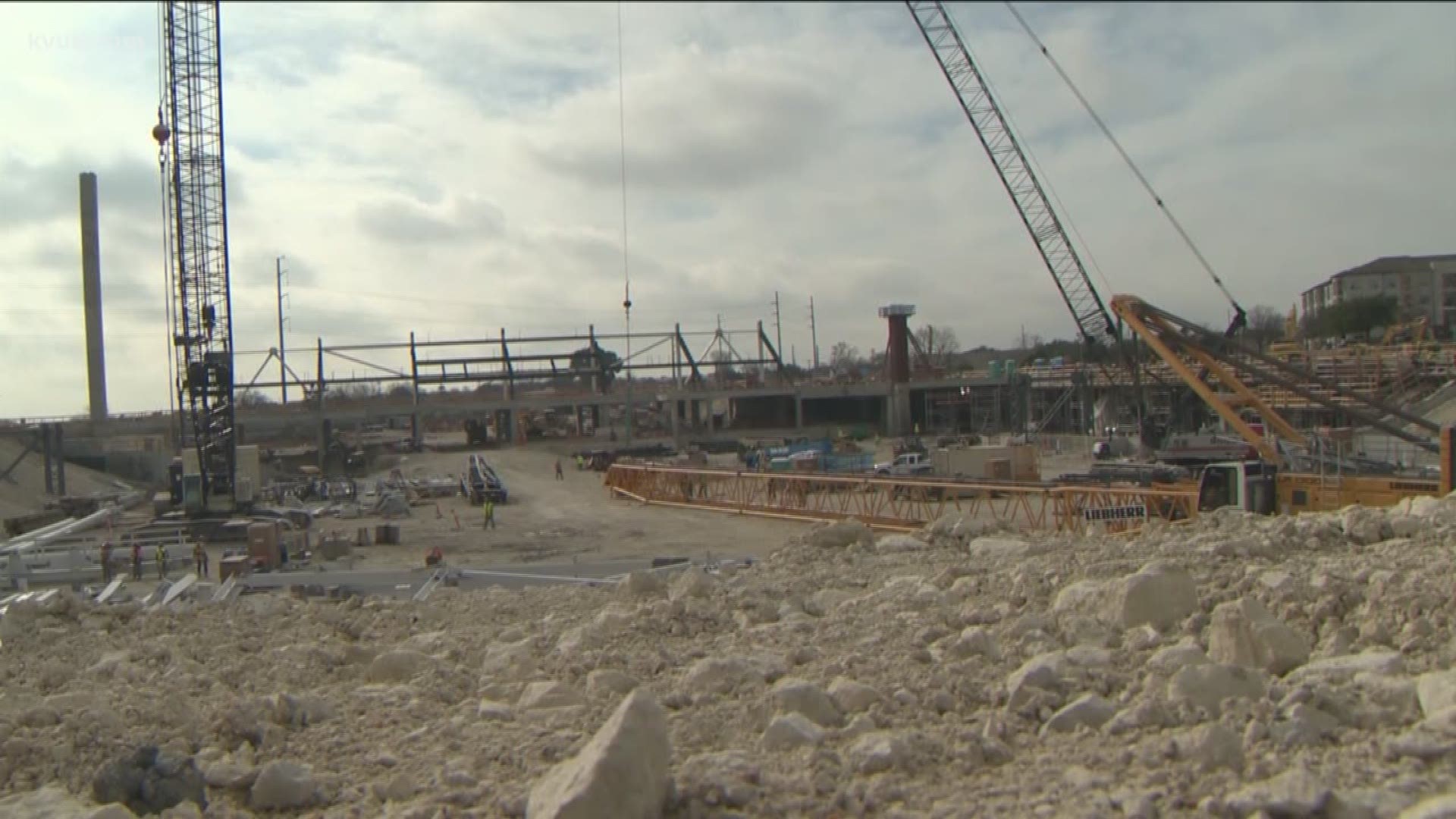 AUSTIN, Texas — If you’re ever driving near the intersection of Braker Lane and Burnet Road in North Austin, the odds are that you may have seen it: towering cranes in the distance as the ongoing construction of Austin FC’s stadium continues.

The stadium broke ground in September and, since then, it’s fair to say the stadium has made quite a bit of progress with sections of stands going up.

“It’s day by day, minute by minute," said Jordan Enke, the VP of stadium operations for Austin FC on Tuesday. “Something that we’ve done is we’ve held very true to what our renderings are.”

The stadium will have a capacity of 20,500 people. The club broke an MLS record in June of last year for the most season ticket membership deposits in a single day, according to the organization. The club said it secured deposits totaling over 30,000 seats back then.

“We are in the process of converting our season ticket deposits into full season tickets," said Andy Loughnane, president of Austin FC, on Tuesday.

Above is a 3D rendering of what the stadium is expected to look like by completion. Right now the club said everything is on track for completion by spring 2021.

This summer the club will get a better idea of an exact expected completion date.

KVUE was given an inside look along with other local media on Tuesday inside of the construction site to see how it’s all going, and we’re breaking it down section by section of the stadium.

The west end of the stadium

Credit: Tom Rapp
The base of the West stands of the stadium.

On the West side of the stadium is where a lot of premium seats and sections will be, according to the club. This also includes the gameday operations on the ground, like the team benches and a field club.

"... really our field seats into our field club and then you start stacking up to your suites and premium terrace and then our porch on the upper west," said Enke. “… pre match presentation, the player tunnel, the entry to the pitch, are all coming through midfield on that west side.”

Credit: Tom Rapp
The ground where the field will be.

Fun fact, the field is actually being grown on a sod farm in Arizona, according to Loughnane.

"... so we got a sod farm in Arizona that is growing our special hybrid of grass to be ready for installation later this fall,” he said.

The south end and the supporters section

Credit: Tom Rapp
The south stands where the supporters section will be.

The south stands will be home to the main supporters section, which will be able to hold 3,500 standing fans.

Austin Anthem is the main support group for Austin FC.

“Walk in on opening day and watch them because they’re going to be driving the energy," said Enke.

The east stands as of February are probably the most noticeable feature of the stadium from a distance (aside from the cranes towering over, of course).

“I can look out our office window about a half-mile away and see the five cranes in the air, so its very exciting," said Enke.

Credit: Tom Rapp
The north end of the stadium.

At the north concourse is a complex that will be later to include concession stands, guest services, first aid, a sensory room and merchandise, among other things.

“At the end of this month you’ll see the elevated deck come to completion and then they’ll keep moving up until they get to that third level," said Enke.

The club also said it's continuously looking at operations outside of the stadium.

“Mobility and parking has been a daily conversation that we have internally," said Enke. “We’re meeting with CapMetro, we’re working with ATD to finalize those plans.”

The Austin Transportation Department told KVUE its currently working with Austin FC to finalize a traffic impact analysis (TIA). The TIA will present needed improvements and will assess traffic operations and impacts to the surrounding area, according to ATD.

While the final TIA is still being developed, the transportation department said some plans include a traffic signal planned for Aguilar and Braker, east of the intersection of Burnet and Braker.

A signal is also planned at the southern driveway for the stadium, currently being called the Burnet access road.

The intersection of Burnet/Braker is currently proposed to have dual lefts installed in each direction as part of the Corridor Program Office’s project, which is part of the 2016 mobility bond, according to the department.

A spokesperson for Capital Metro told KVUE that it continues to work with the club on mobility improvements in the stadium area.

"In their agreement with the City, Precourt agreed to invest $3.6 million in public transportation improvements, including $640,000 for bus improvements at the stadium. Capital Metro, Precourt and other partners continue to explore improvement opportunities on the Red Line," said a spokesperson with CapMetro to KVUE over email on Tuesday.

It will be located at the Parmer Pond near Parmer Ridge Drive and Center Lake Drive, which is about five miles from the Austin FC stadium.

“We just completed our design and development phase which is the third phase of four. Within about two weeks we’ll be entering our construction document phase and we’ll submit those plans for permitting with the city. Really hope to break ground out there in the July time frame," said Enke.