If you spotted a drone flying over your neighborhood, it might have been researchers from Austin Energy and IC² Institute testing out new software on power lines. 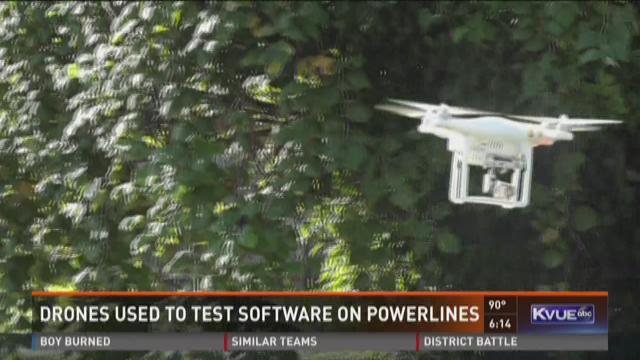 If you spotted a drone flying over your neighborhood, it might have been researchers from Austin Energy and IC² Institute testing out new software on power lines.

Austin Energy is considering the possibility of using these drones to detect equipment that is damaged or not working properly.

On Thursday, the utility company along with the institute came out to test out the power lines that are working properly in North Austin, to eventually compare the results with damaged power lines in the future.

Austin Energy is partnering with IC², which is a Global Commercialization Group at the University of Texas, to test out the software's groundbreaking computer imaging process recognition, which could change the way utility crews detect damaged power lines.

"Automatically tell where the damaged lines, damaged components are, by just feeding it into the system, saving potentially days of inspection time,” said James Vance with Global Commercialization Group at UT.

"Right now, for instance, we use lineman who patrol lines, up and down, sometimes for miles, looking for problems, and that's something a drone can do in the future,” said Carlos Cordova with Austin Energy.

What may usually take crews days to do, these drones can reportedly complete in four minutes. IC² is working with a company from India, the Arcturus Business Solutions, which invested more than $200,000 in the project.

Project leaders said they hope to have the research on these drones completed and have the drone software available for commercial use by next March.

Austin Energy said if they do adopt this new technology it will not eliminate jobs, but instead, the company will most likely require its workers to learn new skills on how to operate the drones.