A wrongful death lawsuit has been filed against an Austin daycare after an incident at the center resulted in the death of a 5-month-old in March 2018.

AUSTIN, Texas — The parents of a late 5-month-old have filed a wrongful death lawsuit against an Austin daycare center after their baby died just days after being put on life support in March 2018.

According to the lawsuit, on March 15, 2018, 5-month-old Emilia Elmquist was dropped off at 1st Step Learning Center in Austin located off of Anderson Mill Road at approximately 10:35 a.m. by her father, Corey Elmquist.

After returning home to prepare for going to work, Corey Elmquist was called by the child care center and urgently told to come back.

When Corey Elmquist arrived, sheriff deputies, firefighters and EMTs were surrounding his baby, performing CPR on her. Emergency personnel spent nearly 30 minutes performing CPR on Emilia Elmquist before they got a pulse and took her to North Austin Medical Center, where she arrived post-cardiorespiratory arrest with a severe anoxic brain injury, the lawsuit said.

The 5-month-old infant was admitted to the pediatric ICU and put on life support, where she died on March 18, 2018, three days after the daycare incident, according to the lawsuit.

The lawsuit said an investigation into the baby's death was conducted by the Texas Department of Family Protective Services and the Williamson County Sheriff's Office.

Investigators interviewed Denise Denton, the caregiver responsible for supervising the 5-month-old that morning, according to the lawsuit.

Denton told investigators Emilia Elmquist appeared happy and showed no signs of anything being wrong, and then she placed her in a Bumbo chair. Denton said she then took her out of the Bumbo chair after the infant started whining. Emilia Elmquist's whining progressed to crying after nearly 40 minutes, according to the lawsuit.

Denton said she changed her diaper and placed Emilia Elmquist in a playpen while propped-up on a Boppy pillow, which the lawsuit later stated her parents had not given permission for daycare workers to do. The lawsuit stated Emilia Elmquist's crying immediately turned into screaming after being propped-up on the Boppy pillow. Denton told investigators that crying and screaming was not uncommon for Emilia, but that her screaming this time was "different" and "serious," and her behavior was "out of the ordinary."

The lawsuit said Denton told investigators she left the baby in the crib to go prepare lunch for other children and said her screaming eventually stopped. Denton told investigators she did not check on Emilia Elmquist for about five minutes after her screaming had stopped, then noticed the 5-month-old looked "weird" and was gray in color and not breathing. Denton said she then went to ask for help instead of starting CPR herself.

The Elmquists are seeking $1 million in damages and a jury trial against Denton and Cassondra Mancuso, the director of the center, according to the lawsuit.

Here is a copy of the lawsuit: 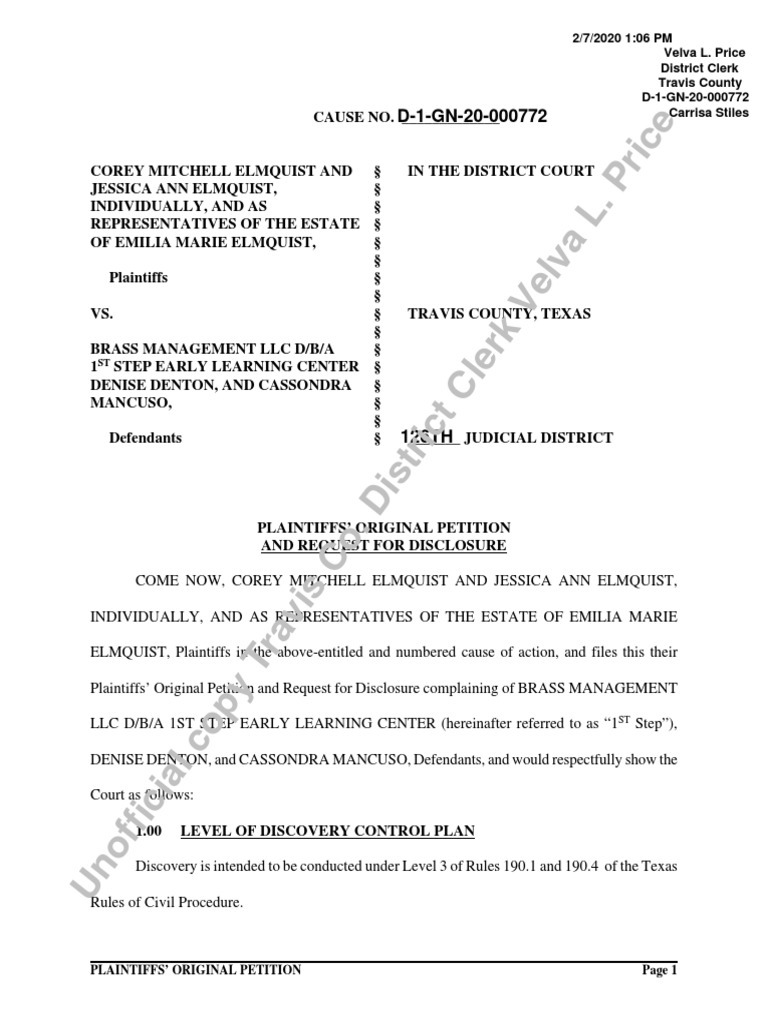 KVUE has reached out to 1st Step Learning Center for comment on the lawsuit. This article will update when a response is received.