Councilmembers will take feedback on the proposed city budget before they vote on it.

One of the big items on the proposed budget includes cuts to the Austin Police Department. In June, Cronk laid out plans to restructure the department, including reallocating funds and eliminating some jobs.

The meeting took place on Facebook Live at 2 p.m.:

Posted by City of Austin Government on Monday, July 13, 2020

The proposed budget for the 2020-21 fiscal year of $4.2 billion – the same size as last year’s – adjusts to new fiscal constraints and community expectations, with focused investments in core programs and City infrastructure, according to the city manager's office. The proposed $1.1 billion general fund budget supports re-imagining public safety through a reallocation of police funding to health, housing, and other critical social services. The capital budget includes $1.2 billion in planned spending.

At least $11.3 million is expected to be cut from the APD budget. The Austin Justice Coalition had previously requested a $100 million budget cut while other groups asked for $225 million.

$11.3 million dollars expected to be cut from @Austin_Police budget according to city council member, @kathietovo. Not the $100 million @AtxJustice asked for or $225 million other groups requested. @AustinCityMgr will deliver proposed 2020-2021 budget to council at 2pm. @KVUE

The $11.3 million proposed reduction to APD's budget included the following:

The reallocation of funds would go to the following: 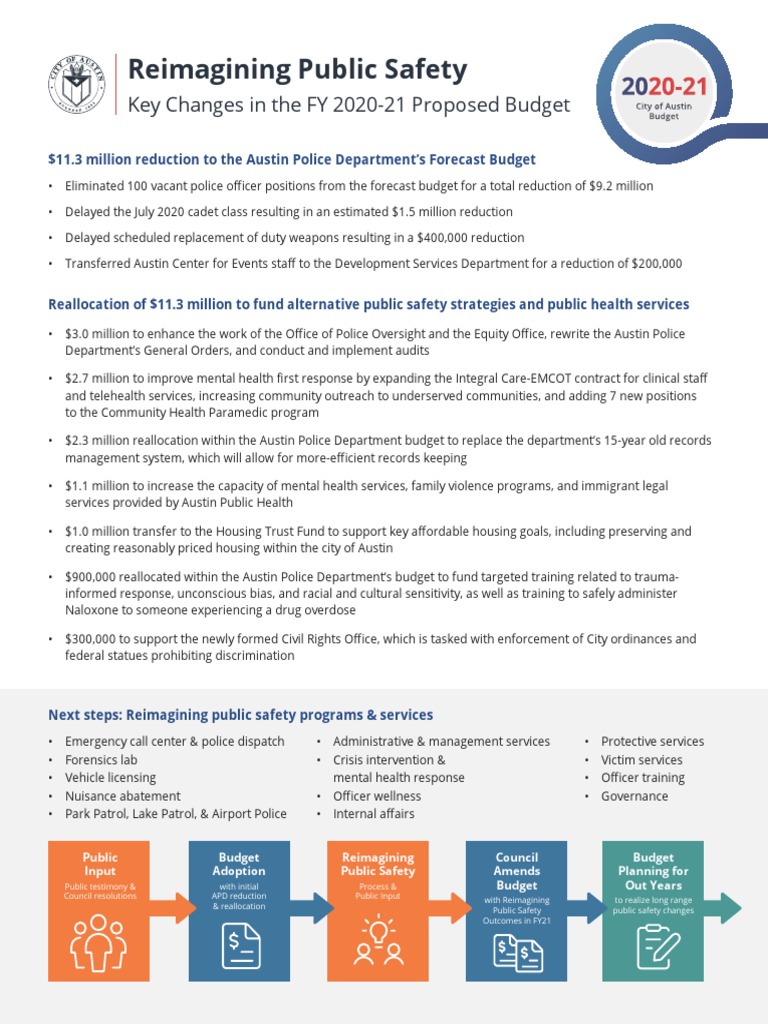 City of Austin police budget cut proposal 07-13=2020 | Police | Austin
Eliminated 100 vacant police officer positions from the forecast budget for a total reduction of $9.2 million * Delayed the July 2020 cadet class resulting in an estimated $1.5 million reduction * Transferred Austin Center for Events staff to the Development Services Department for a reduction of $200,000 Reallocation of

"People experiencing a mental health crisis need an immediate health care response as well as follow-up care," Councilmember Ann Kitchen said on Friday. "[The EMCOT] program offers a mental health professional when a person calls 911. Doubling the budget for this program and periodic review, gets us closer to ensuring funding for the program meets our community’s need."

"The city manager has increased funding for the necessary services that puts boots on the ground for trained mental health professionals to address these needs in our community," said Councilmember Leslie Pool. "This will benefit our first responders as well as our citizens."

“Austin remains engulfed by a pandemic that has caused tragic loss across our community, upended our way of life, and triggered an unprecedentedly swift economic contraction. At the same time, the City is taking new steps to confront and end the long history of systemic injustices experienced by people of color by our public safety institutions,” Cronk said. “This budget meets these crises head-on, building on work to combat COVID-19 and help our community recover from its effects while accelerating the process of re-imagining our public safety system to ensure justice and equal treatment for all our residents.”

Even though the cuts are what Chas Moore, the head of the Austin Justice Coalition, and other activists have been asking for, he said they don't go far enough.

"We're disappointed in that. We were trying to [hire] 30 bodies this year. You know, the cold, hard facts are that COVID has not slown Austin down as far as growth. There's still people moving here," said Casaday.

During a protest focused on defunding the APD over the weekend, Mayor Pro Tem Delia Garza told KVUE the proposed budget doesn't go far enough when it comes to reallocating funds.

"I'm not happy with very minimal cuts that have been made to APD, and some of those cuts include actually cutting it out but then putting it back in," Garza said. "I am looking for a much more significant investment in housing and mental health and public health and unless I see that, I can't vote yes on the budget."

"To ensure our community’s resilience requires us to confront the systemic and inequitable treatment that communities of color have experienced for generations, most visibly and tragically in the name of public safety," Cronk said. "The recent deaths of Mr. George Floyd in Minneapolis at the hands of a police officer and our own officer-involved shooting death of Mr. Michael Ramos have amplified the call for justice in our community in ways we cannot ignore. The City has started down the path toward ending this injustice but we have further to go and we must stay the course to redefine public safety in Austin."

Councilmember Kathie Tovo said on Monday she is open for more cuts to the APD if that's what the community wants.

"The City Manager’s initial budget proposal takes a small step in the direction of reducing funding for police patrol and increasing funding for more comprehensive forms of community safety. But, it is far from enough.

The City’s initial proposal removes 100 police patrol positions from the budget, and $8.1 million has been allocated away from the police department and toward community priorities that will make us more safe and more just. Compared to recent history, this is a large amount. Two years in a row, I have proposed votes to reduce police patrol by a fraction of this amount, and both proposals have failed. The reallocation of 100 police positions toward community solutions for safety is only possible because the Movement for Black Lives has changed the political reality of our time. However, the City’s response must be stronger.

I stand alongside the calls from local organizations and everyday activists demanding a $100 million reinvestment into our community’s safety from APD’s existing budget this year. I am committed to working towards that goal throughout this and all future budget processes. We must fix our family violence shelter shortage. We must have behavioral health professionals respond to mental health crises, rather than just police. We must invest in violence prevention, housing, and care. We must do better, and I will be working with the community to change this budget proposal."

Monday evening, Mayor Steve Adler said he appreciates Cronk's work on the proposed budget, but he is not ready to sign off on it yet.

He added that "truly reimagining policing will require us to first reimagine budgeting" and that this budget must be the start "of undoing generations of institutional discrimination in all we do."

I appreciate the Manager’s work (and note that it calls for the lowest year to year increase in fees and taxes in nearly 20 years) and I’m not ready yet to sign off. We need greater assurance that we’re leveraging this moment to create transformational change. 1/4

Other spending proposals include: 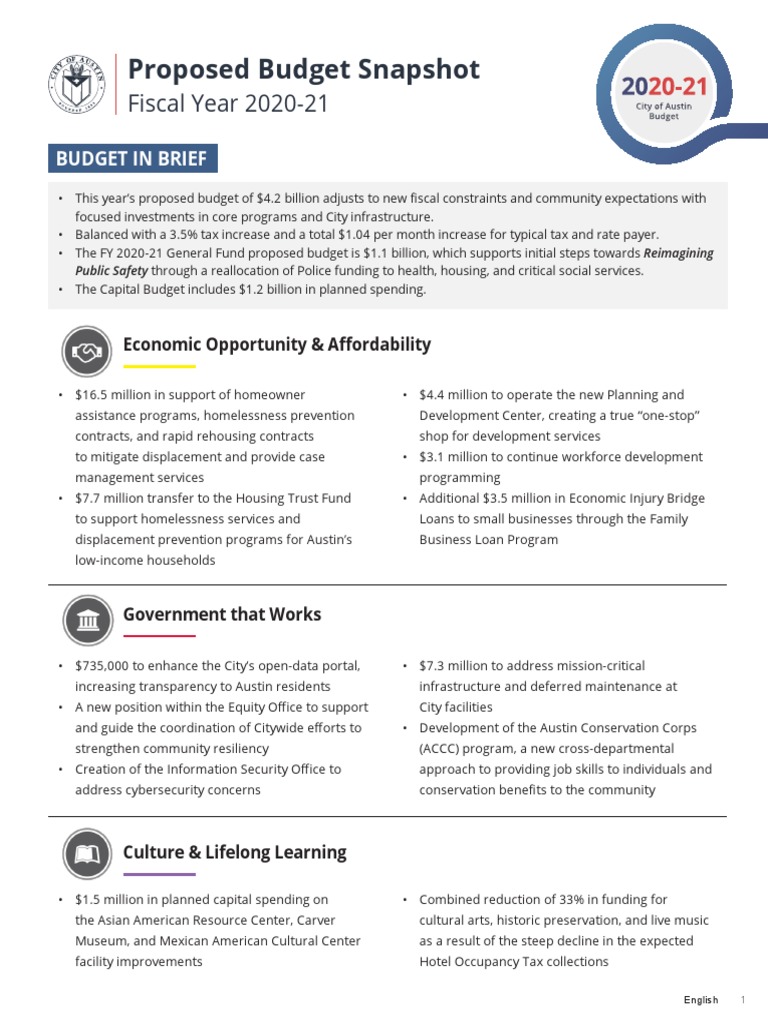 City of Austin 2020-21 proposed budget 07-13-2020 | Homelessness | Taxes
BUDGET IN BRIEF* This year's proposed budget of $4.2 billion adjusts to new fiscal constraints and community expectations with focused investments in core programs and City infrastructure.* Balanced with a 3.5% tax increase and a total $1.04 per month increase for typical tax and rate payer.* The FY 2020-21 General Fund proposed budget is $1.1 billion, which supports initial steps towards Reimagining Public Safety through a reallocation of Police funding to health, housing, and critical social services.* The Capital Budget includes $1.2 billion in planned spending.

Because of the pandemic, the City's aviation department, which covers Austin-Bergstrom International Airport, and the Austin Convention Center will have their budgets cut by 18% and 30%, respectively. Expansions planned for both entities are on hold indefinitely.

Councilmembers will take feedback on the proposed budget at the end of the month before they vote and make a final decision in mid-August.

For more information about the City's budget development process, go to austintexas.gov/budget.