Fewer young people are smoking, but a growing number of them are vaping, according to top health officials, across the country. 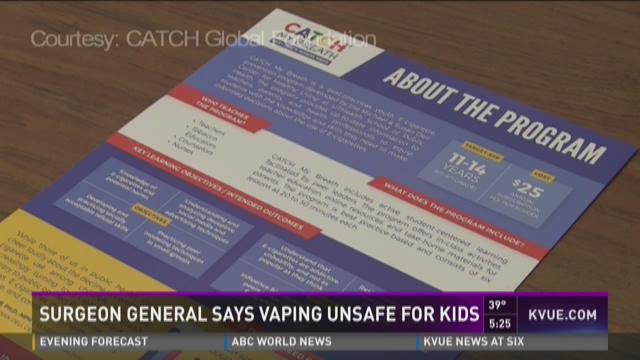 Fewer young people are smoking, but a growing number of them are vaping, according to top health officials across the country.

The U.S. Surgeon General’s report is considered the first official health review by the federal government on e-cigarettes impacting youth.

Nationally, the number of underage teens, who have tried e-cigs have spiked by 22 percent within just one year.

An Austin-based organization, the ‘CATCH Global Foundation’ is now stepping in to hopefully curb that trend.

Megan Grayless with the ‘CATCH My Breath’ program called the new numbers alarming, as one state survey shows about one in every four Texas students has tried e-cigarettes.

"Very alarming, because in particularly with youth and young adolescence, their brain is still developing,” said Grayless.

"The marketing of these cigarettes is highly seductive,” said Duncan VanDusen, CATCH Global Foundation Executive Director, "They don't know that they usually contain nicotine, even if the bottle is not labeled as containing nicotine. The last study that we saw, 43 percent of the bottles that were labeled as not containing nicotine actually did contain nicotine, and that's something parents aren't aware of."

The Catch My Breath Program, based here in Austin, involves a series of six lessons on the following:

"They think they're safe, and they're not really, so it's important for us to use the ‘Catch My Breath’ curriculum and bring that to the kids,” said Valerie Philips, C.D. Fulkes Middle School Athletic Coordinator.

Over the summer, the pilot program for CATCH My Breath was very successful with seven out of every eight students saying they no longer plan to try e-cigs, due to the classes.

“We were very excited about that data, and we received some phenomenal teacher feedback as well, and we made some revisions to the program, that is what we’re implementing, across the nation,” said Grayless.

The organization called ‘Central Texas Schools,’ sponsored by the St. David's Foundation, is now offering the program free of charge to the schools in the area.

"I learned not to believe advertising, because a lot of it is not true, and I also learned that it's not water, and it's actually chemicals that are really bad for you,” said Udy Ekpo, student.

If your school is interested, or as a parent, you would like to advocate for your children's school to get involved, click on this link to learn more.