People were seen celebrating and protesting in Austin after Joe Biden was declared the projected winner.

AUSTIN, Texas — With the news that former Vice President Joe Biden is the projected winner of the 2020 presidential election against President Donald Trump, people took to the streets in Downtown Austin to celebrate and protest.

In videos posted to social media the morning of Nov. 7, people could be heard honking their car horns and celebrating in the streets. 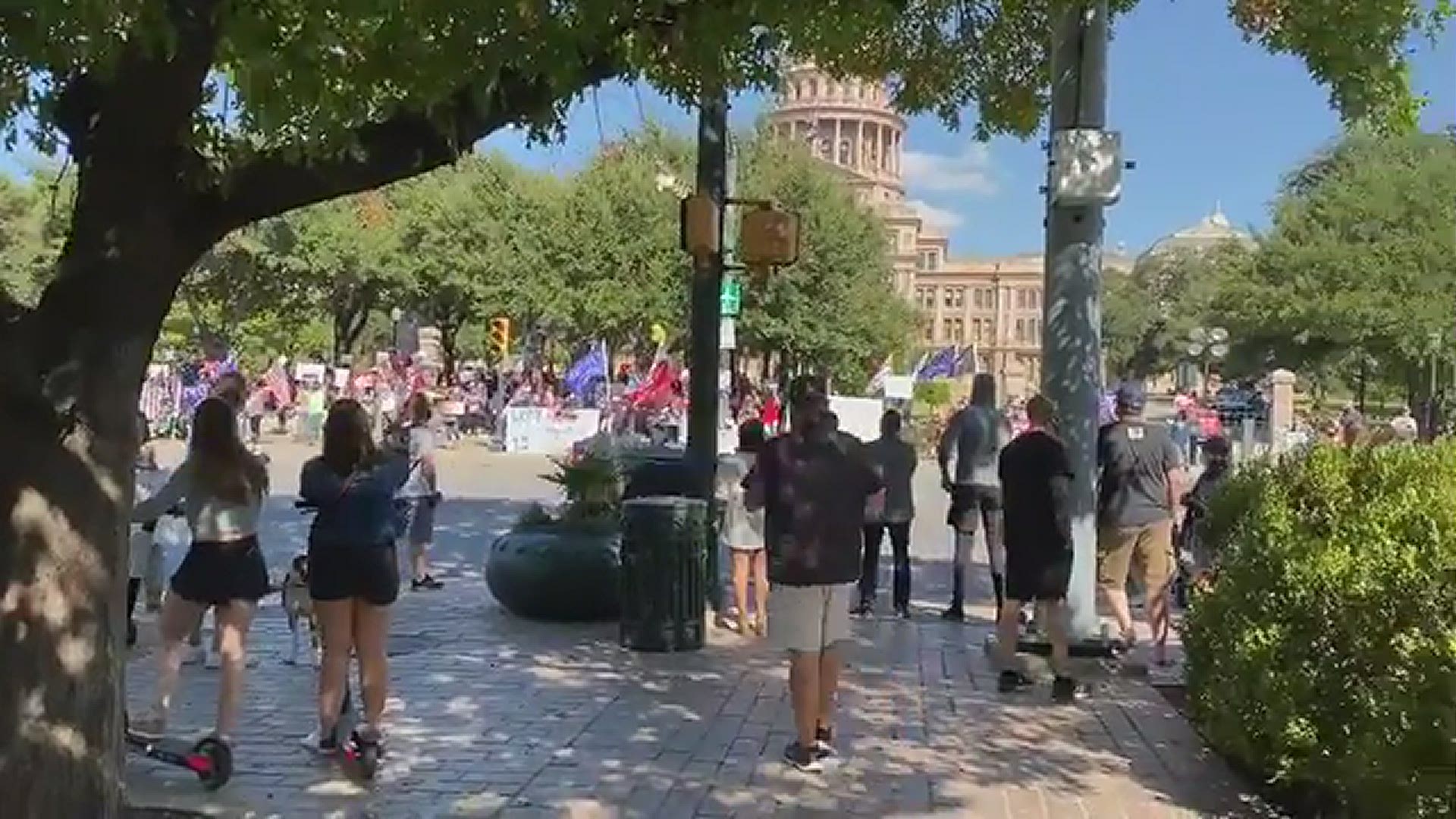 Other Biden supporters were seen singing and chanting in Downtown Austin on Saturday.

The protest/rally is still going on here at the capitol. The crowd is smaller but the energy is still high on both sides. @KVUE #Election2020 #austin #texas pic.twitter.com/EbTs7dELEF

Some protesters near the Texas Capitol were also seen holding Trump signs.

KVUE's Daranesha Herron took video of Trump supporters marching to the Capitol, chanting, "We want Trump." Police have taped off the sidewalks to prevent protesters from blocking streets.

Armed protesters, who self-identified as members of the "Texas General Militia," were also in the area.

The protest is getting a little smaller but still a good amount of people out here.

APD put caution tape around the sidewalks to keep people off of the streets.

So far it's looking like a peaceful Austin protest. @KVUE #austin #Election2020 pic.twitter.com/w2AS70nuJz

President Trump supporters are marching back to the Capitol chanting we want Trump. @KVUE pic.twitter.com/m2N3FMDQ7V

Texas General Militia or Minute Men are out here as well in downtown Austin. @KVUE pic.twitter.com/kNUV5DdXg5

According to KVUE's sister station, KENS, pro-Trump caravans are expected to converge at the Capitol Saturday.

At around 1:30 p.m. Saturday, Austin police warned drivers to be aware of road closures and avoid the area of 11th Street and Congress Avenue due to a "crowd surge."

KVUE's Bryce Newberry said there was traffic backup from the crowds on Saturday. American flags as well as pride flags could be seen from cars. Later in the evening, cars continued to honk as they passed the Capitol building.

There’s a traffic backup into the capital city of #Texas and the honking is constant following #Election2020 results. I’ve seen American flags and pride flags waving from cars with all their windows rolled down in #Austin @KVUE pic.twitter.com/UySk9xprjF

And the honking continues in #Austin following #Election2020results as traffic backup doesn’t let up on Congress Ave toward #Texas Capitol pic.twitter.com/69bA1XVUyz

Far fewer people celebrating and protesting the projected victory for @JoeBiden and @KamalaHarris, but the loss of voices has been replaced by vehicles honking their horns as they drive by the Texas Capitol building. @KVUE pic.twitter.com/m6HaxK42AE

Democrat Joe Biden has surpassed the 270 electoral vote threshold to take the White House and become the 46th president of the United States.

How to listen to the Texas-West Virginia football game