A man named in a protective order that was filed by a missing Temple woman was arrested Tuesday in Michigan. 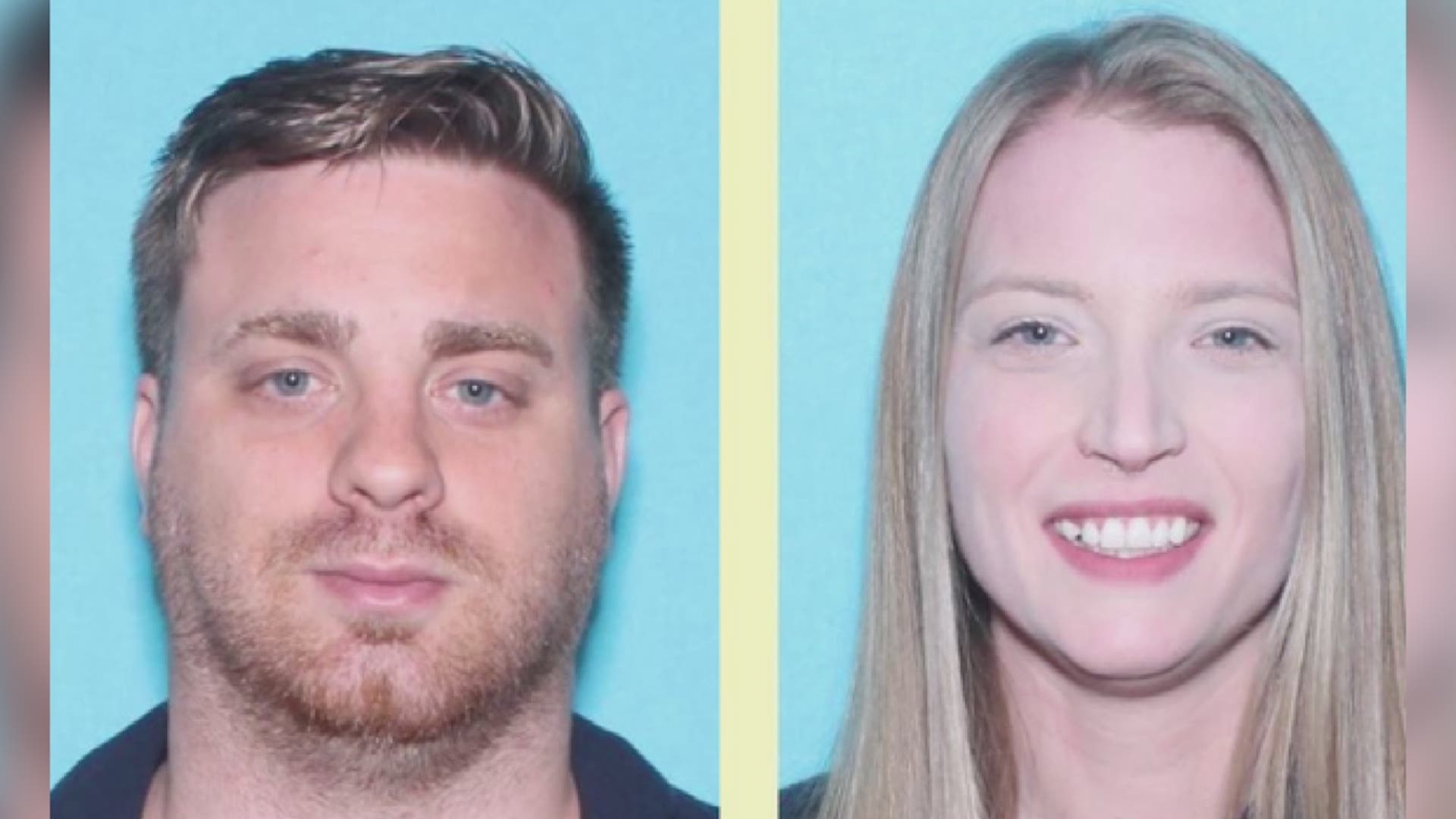 TEMPLE, Texas — A man named in a protective order that was filed by a missing Temple woman was arrested Tuesday in Michigan, accused of breaking into the woman's house.

Jenna Scott, who went missing on Jan. 4, with her long-time friend 32-year-old Micheal Swearingin, filed a protective order against her ex-boyfriend, Cedric Marks, out of fear of violence on July 27, 2018, the order said. 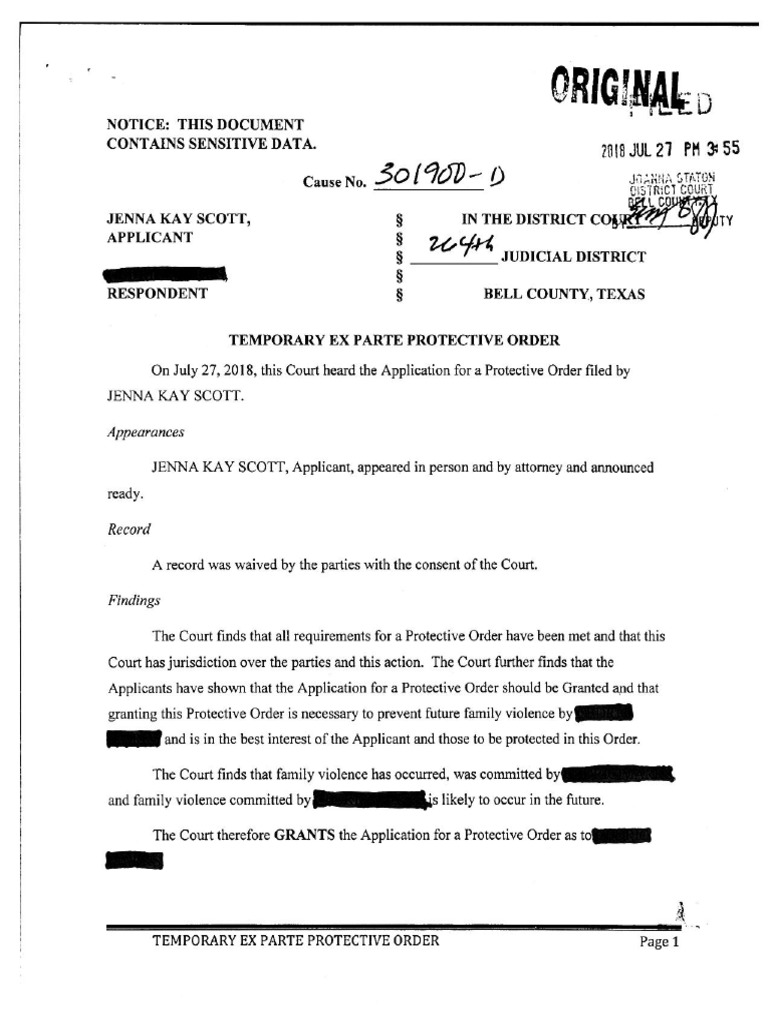 In her own words

Scott described abuse and her fear of Marks.

She said her former boyfriend told her about killing pets when he was a child. She said Marks explained how he covered up the killings and "he could do the same in Texas," the affidavit said. Scott said Marks threatened to hurt her and her family.

She described his physical abuse in the document.

Scott said that on one occasion Marks pulled her from a vehicle and slammed her to the ground. She said she fears for his children and her daughter, according to the affidavit.

"I'm terrified of this man. I need to be protected from this man," Scott said in the document. 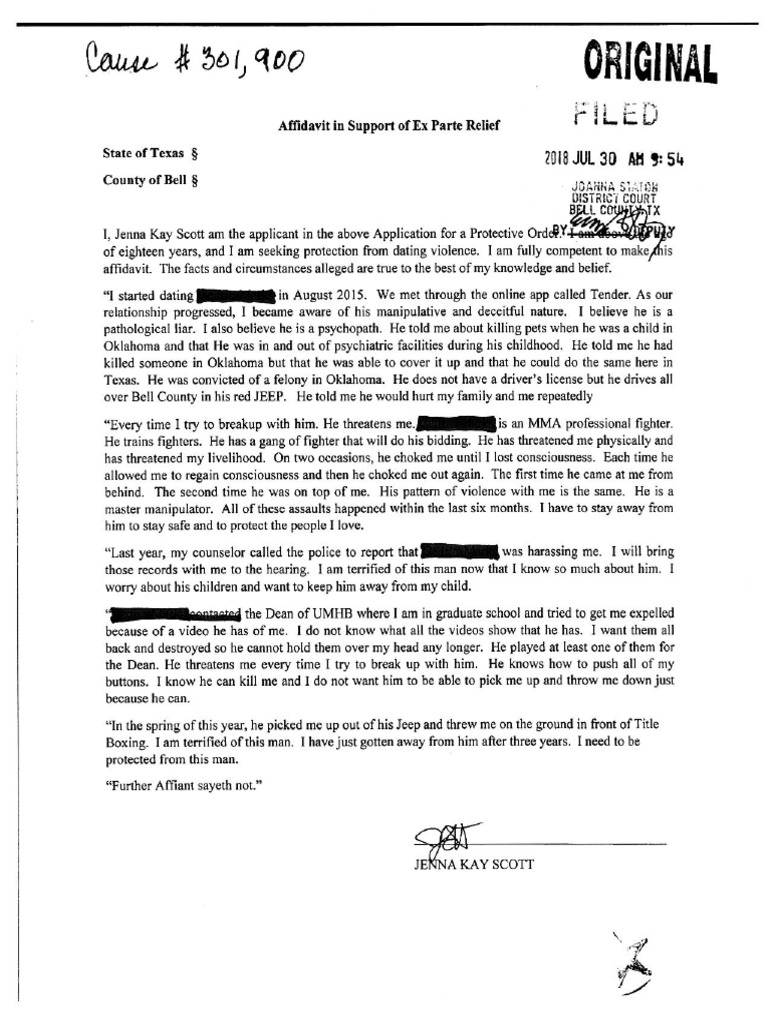 A judge later dismissed the order on Sept. 17, 2018, according to court documents. It's still unclear why the order was dismissed.

Details of the ex-boyfriend's arrest

According to his arrest affidavit, Temple police were called on Aug. 24, 2018 around 9:51 a.m. to a home in the 7700 block of Redbrush after Scott went to the Temple Police Department to report that Marks broke into her home.

Scott reported that she and Marks were at the center of investigations for violence against one another, arrest records said.

Scott told police that she was lying in bed with her 9-year-old daughter when the house alarm announced, “garage door,” which indicated that the door leading from the house to the garage was open, the affidavit said. Scott said she went into the living room and saw Marks, according to the arrest record.

Marks told Scott it’s “your word against mine” and that he has “friends at the Killeen Police Department. He also told Scott, “You know what I’m capable of. Your entire family and all of your friends will need witness protection if you call the police,” the affidavit said. Marks also told Scott that she needed to drop the charges against him, according to the affidavit. 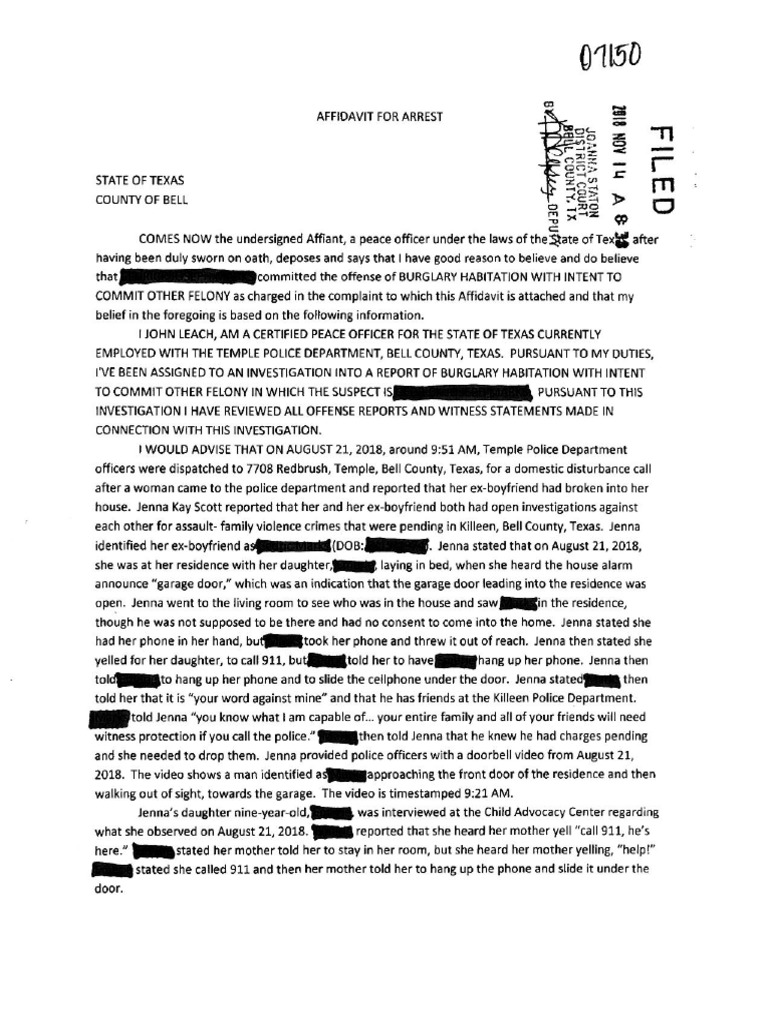 Ex-boyfriend of Jenna Scott arrest affidavit
AFFIDAVIT FOR ARREST 3 z7 as oco_ ges oT STATE OF TEXAS Bo m COUNTY OF BELL PHe> gg 2 = @ COMES NOW the undersigned Affiant, a peace officer under the laws of the State of Texk@ after having been duly sworn on oath, deposes and says that | have good reason to believe and do believe thot JERI committed the offense of BURGLARY HABITATION WITH INTENT TO COMMIT OTHER FELONY as charged in the complaint to which this Affidavit is attached and that my belief in the foregoing is based on the following information.

Scott gave police surveillance video that showed Marks walking toward her front door, then walking out of sight toward the garage at the time she said he broke in, arrests records said.

RELATED: “My sister is being held hostage somewhere.” Family fears for life of missing Temple woman

The child, who was interviewed by the Child Advocacy Center, said she heard her mom yell, “Call 911, he’s here,” and then told her to stay in her room. The child said she also heard her mother yelling for help so she called 911 before Scott told the child to hang up the phone and slide it to her.

Marks is being held in a jail in Grand Rapids, Michigan.

What we know about Jenna Scott

KCEN reporter Jasmin Caldwell took a look into Scott's past for clues surrounding her disappearance and found that Scott also has a history with police.

As recent as June 1, 2018, Scott was charged with two misdemeanors-- one for terroristic threat of a family, household and assault causing bodily injury against a family member.

It is unclear who Scott assaulted and when she was to appear in court to face the charges. 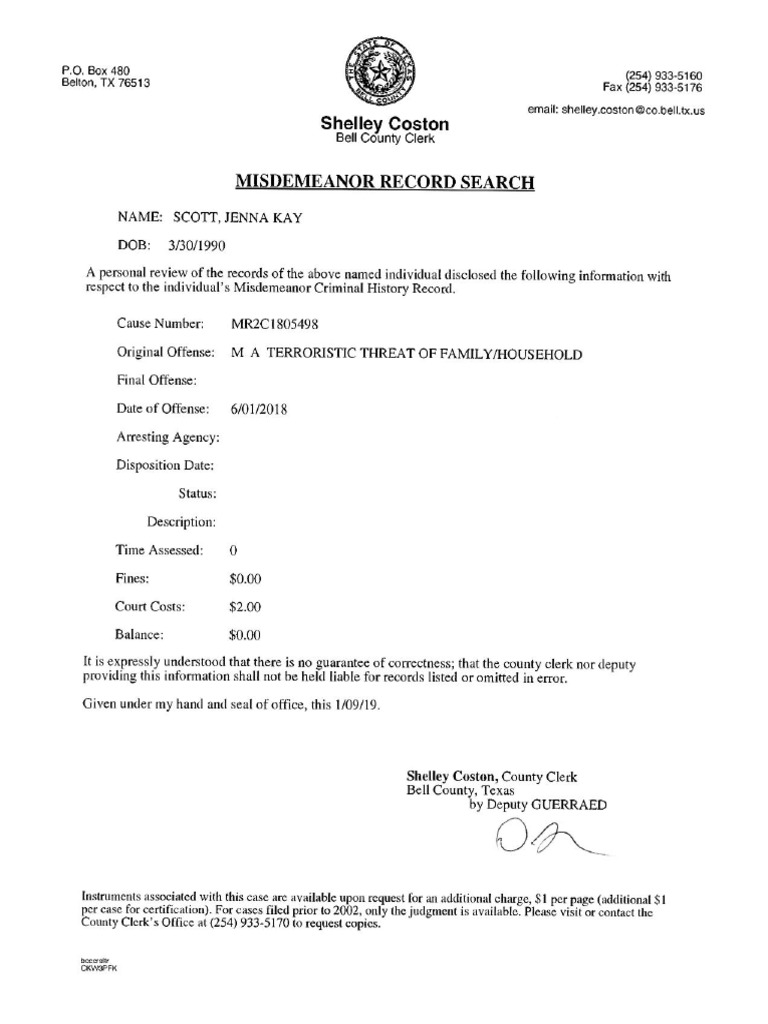 Scott was charged with a felony in Sept. 2014 after she spit in the face of an Austin police officer after she was drunk and passed out on the grass.

According to court documents, the off-duty officer and a friend were walking a dog when they saw Scott passed out and tried to wake her. When the officer was unable to wake Scott, he and his friend took her to his apartment on Town Lake Circle, court documents said.

Another officer, Officer Cuellar was called to the home to check on Scott, the affidavit said. Cuellar said he could smell alcohol coming from Scott and her speech was "severely impaired."

Cuellar tried to contact someone to pick Scott up but no one would come, court records said. Because no one was willing to get Scott and she expressed "suicidal ideations," the officer decided the best course of action was to arrest her for public intoxication, according to court documents.

As Cuellar tried to arrest Scott, she resisted and began hitting herself in the face and head with her knees. As the officer tried to prevent Scott from hurting herself, she spit in Cuellar's mouth and nose, the affidavit said.

Scott was charged with harassment of a public servant.

Search for Scott and Swearingin continues

Scott's family said they are concerned for Scott and Swearingin's safety. The families have raised more than $13,000 of their $10,000 goal to hire investigators to help find the friends. 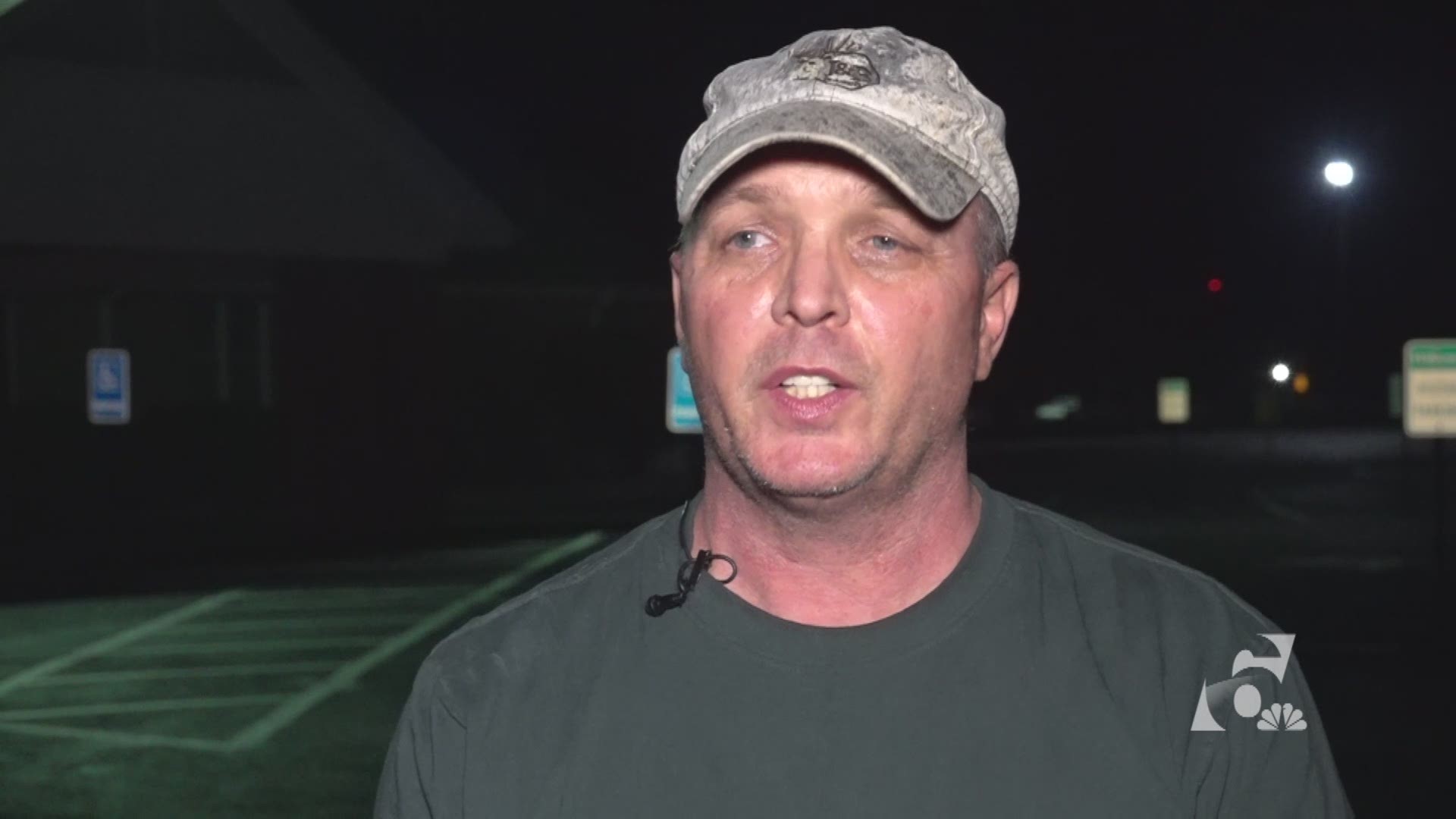