The chief addressed three incidents in which a man in his 20s, a teenage boy and a pregnant woman were shot by police. Investigations are underway. 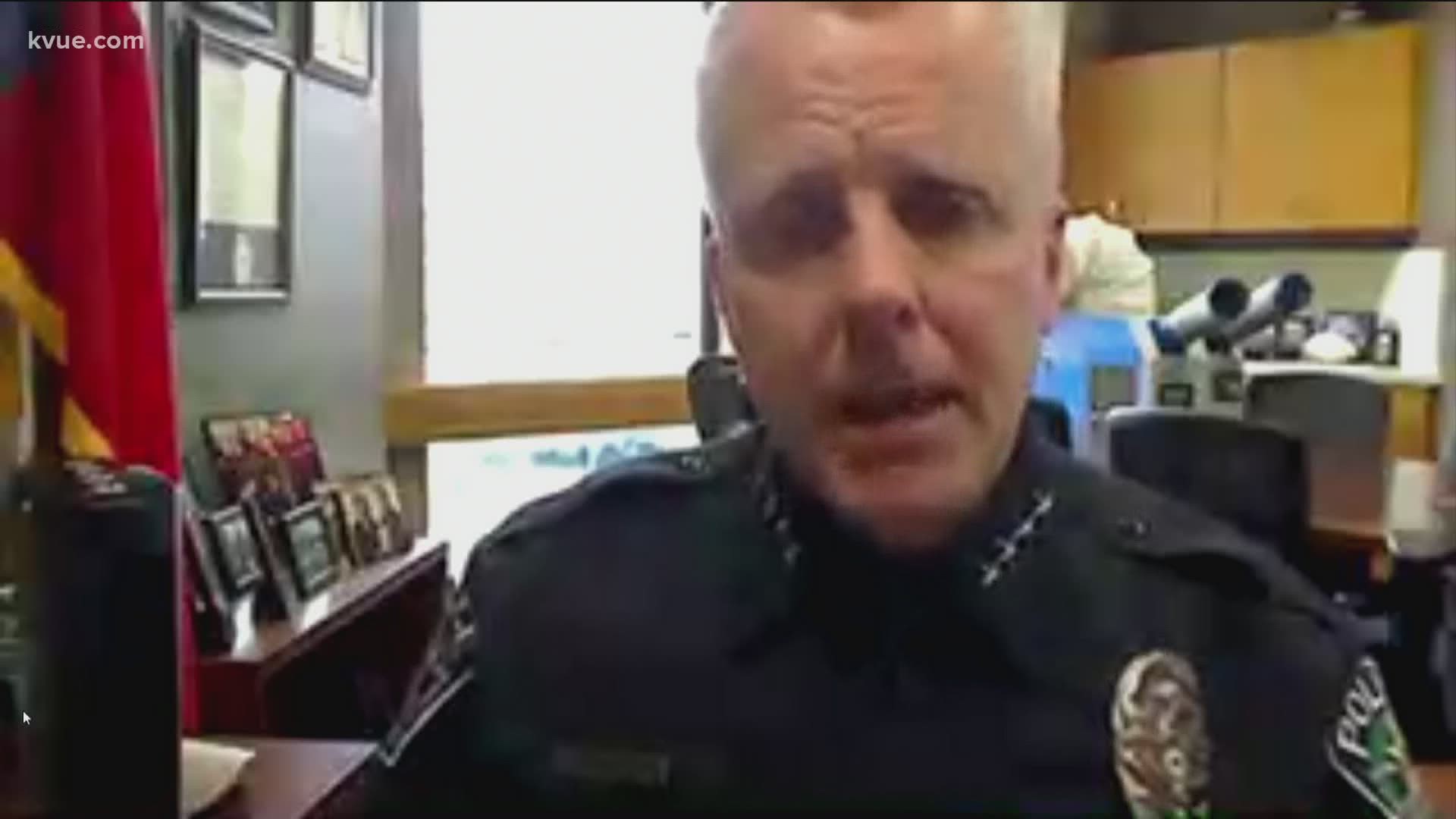 AUSTIN, Texas — Austin Police Chief Brian Manley spoke to the media Monday afternoon regarding the weekend protests in Austin. In his address, Manley discussed a few incidents where protesters were struck with "less-lethal" rounds by Austin police.

"I'm crushed. I've cried a few times today," the police chief said. "This was two very young people that we believe are from our community but regardless of what community they are from .... one is, at least, fighting for their life and the other one has been seriously injured, as well. That is not what we set out to do as a police department. That was not what we set out to do this weekend. Again, we were trying to come out and protect their First Amendment right."

Manley said one victim from Sunday was recording on his phone and standing next to someone, who Manley said threw a water bottle at police officers in front of the headquarters building. The person who threw the water bottle also threw a backpack he was wearing at the officers, Manley said. According to Manley, APD officers shot a less-lethal round at this person who threw the backpack, but the round hit the man recording on his phone instead in the head.

Manley said a group of protesters carried the victim from the Eighth Street bridge toward APD headquarters for medical help. Manley said it was reported – and is under review – that this group was also fired upon with less-lethal rounds as they brought the victim toward the officers. He said he has seen pictures of a woman who was struck in the hand while administering medical aid in this group.

Manley said the young man who was hit by the less-lethal round was brought to APD headquarters and loaded into an ambulance and transported to a local hospital. Manley said a level-one investigation began looking into the incident, which remains ongoing. The chief said this victim remains in critical condition.

"We are praying for this young man and his family, and are hoping that his condition improves quickly," Manley said.

Manley also addressed an incident that occurred Saturday night involving a 15- or 16-year-old Hispanic male with serious injuries. Video on social media shows the teen was struck in the forehead with a less-lethal ammunition round in the 800 block of the service road of Interstate 35, Manley said.

"I've seen the video where he is standing and it appears as if he is struck with a less-lethal ammunition in the head ... in the forehead. I know that we are investigating that case as well," Manley said.

The third incident Manley spoke about involved reports of a pregnant woman getting hit in the abdomen with a less-lethal ammunition round. Manley said there is an investigation for that incident, as well. Her condition was not immediately known.

"She, too, was brought into police headquarters and was assisted by both medics and APD personnel," Manley said.

Anyone with video regarding these incidents is asked to send those to police.

"We have always had a rule that we do not allow people to take over IH-35," Manley said. "That is the major interstate in our city, and when IH-35 is closed, that puts others' lives in danger because fire trucks and ambulances can't get to the places as quickly as they need to."

Manley said in the two instances Sunday where protesters overtook Interstate 35, APD officers used smoke and CS gas in the first incident, but protesters in the second incident, later on, moved after seeing officers put on their gas masks.

Manley said the focus from the law enforcement's point of view was to protect free speech and give people the space to come out and express their concerns.

There were 13 arrests made for burglary of a building, according to Manley.

One reporter asked the chief what he would say to the families of those injured by police.

"What I say to them now is my heart is with you," Manley said before an emotional pause. "I'm praying for your child. I'm hoping they have a complete and quick recovery. And I will make myself open to speak with you and answer questions."

On Tuesday, the Austin Justice Coalition issued a press release calling for local public safety leadership to step down.

“The horrible and unnecessary shootings over the weekend, after the death of Mike Ramos, is a stark reminder that we are also fighting for a new vision for public safety right here in Austin,” said Chas Moore, executive director. “Protesters were angry but there was no need to meet that anger with new violence. We have long called for a world without police, and right now Austin needs to take steps towards a smaller, less lethal, better police force in the meantime. And the first step is new leadership who agrees.”

“At AJC, our goal first and foremost, is to protect black and brown bodies and lives,” added Sukyi McMahon, operations director. “We are in the middle of an epidemic and we are still in this fight for our black bodies. We are here for Brenda Ramos, and the other families that are grieving, and continue to grieve over the injuries and deaths from police brutality.”

Protesters began gathering at the Capitol Sunday around noon despite the Austin Justice Coalition canceling its march. KVUE's Mari Salazar reported that an altercation near City Hall led to APD firing rounds of rubber bullets. Some pepper spray was also deployed. I-35 was shut down twice on Sunday. The first occurrence led to APD clearing I-35 by using smoke devices and CS gas. A Target store in Capital Plaza was also looted, according to APD. Aside from these few instances, the sense of the protests throughout Austin for the day remained generally peaceful. You can watch our live coverage of Sunday's protests here.

The Austin City Council announced it will discuss the protests held downtown over the weekend at a special meeting on Thursday, June 4.