St. David's Medical Center in Austin is the first St. David's facility to offer the treatment. 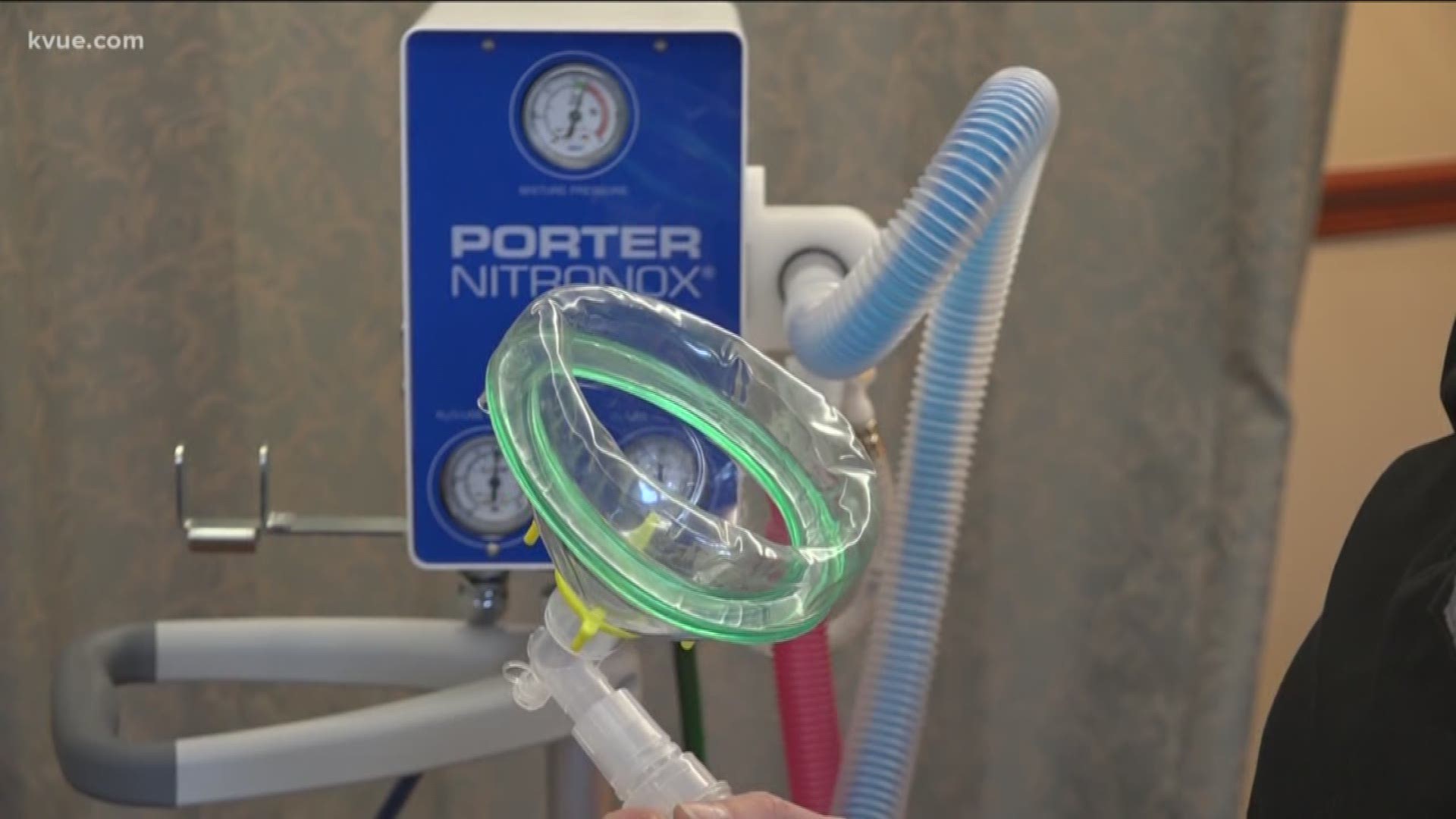 AUSTIN, Texas — St. David's Medical Center has a new option to help moms-to-be manage pain during labor. It's not in the form of a pill, or a shot, but instead a gas: nitrous oxide.

If that name sounds familiar, it's probably because you've probably heard of or even used it before at the dentist's office. It's commonly known as "laughing gas," however this is very different than the one used before filling pesky cavities.

Often in the dentist's office, nitrous oxide will be used at a higher level of nitrous oxide to oxygen, whereas for women in labor, the nitrous oxide is far more regulated and split 50/50 with oxygen.

The gas is self-administered using a mask.

Heater Satterfield is a certified nurse midwife at St. David's Medical Center and explained how it works for moms-to-be.

"It's a great option for women who would like alternatives to narcotic pain medication or an epidural. This is kind of a first line of defense," said Satterfield. "As they [patients] take the apparatus mask off of their face, they're able to have that all released into the air or into the mask and therefore, it's not in their body anymore so it's very quick release."

Satterfield explained that it's also a good option for mothers in which epidural is not an option.

Laugh it off: How more pregnant women are easing labor pains

Satterfield explained while most patients have no reaction at all, some side effects could include a light headache or slight nausea.

St. David's Medical Center is the first St. David's facility to offer the option. They first rolled it out to patients beginning in December, and Satterfield said dozens of patients have already taken advantage of it, like new mom Erin Ortwein.

Ortwein and her husband welcomed their baby girl, Daphne, on Feb. 12.

"We've been planning for this for nine plus months and now we finally get to do it," said Ortwein, who used nitrous oxide during labor. "It's a big change, but we're excited for it and ready to see what she brings us."

She couldn't wait to be a mom, but now her twins will never know her

American moms are dying in childbirth. What you can do about it

Hospitals know how to protect mothers. They just aren’t doing it.

Ortwein explained nitrous oxide was easy to use and allowed her to have control.

"I really liked that option because it felt like something I had control over, which in labor, during labor and delivery, I felt like I had very little control over very much," she said. "I also liked that it didn't have any impact to her [Daphne], where some of the other medical options seemed a little more intense and could have side effects that I wasn't prepared to take on."

Ortwein said she would recommend using nitrous oxide to other expecting mothers.

"It was really nice; it really was self administered, so I had to hold the mask on during those tough transitional contractions when things were really getting super uncomfortable," explained Ortwein. "I felt like it gave me the strength to push through, whereas before if that wasn't an option, I probably would have gone to another pain strategy."