All Together ATX raises almost $6M to help community impacted by coronavirus, and the fundraiser isn't over

Funds raised will be distributed to local organizations working with people disproportionately impacted by COVID-19 and the economic consequences of the outbreak. 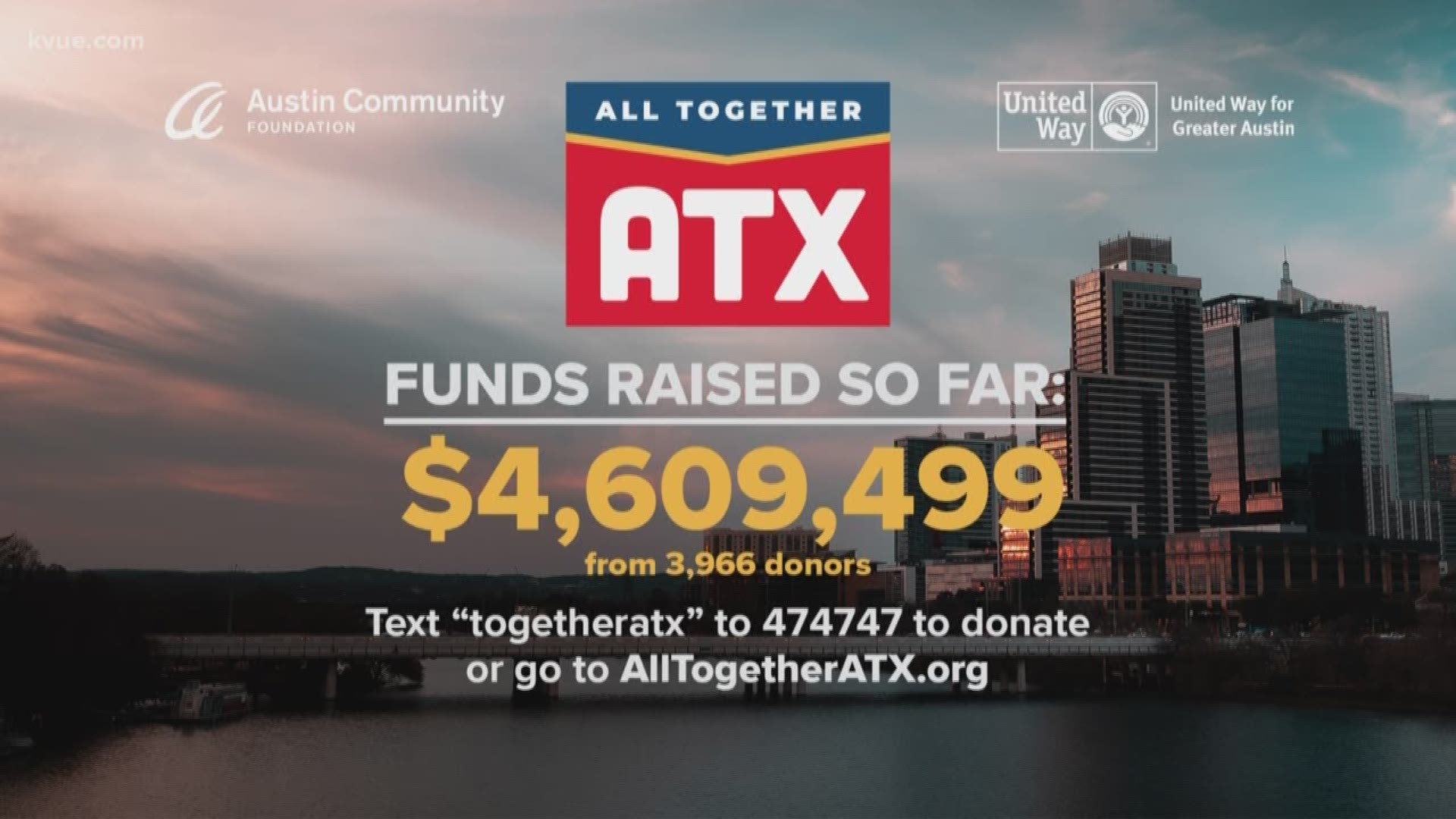 AUSTIN, Texas — As part of an effort called All Together ATX, media outlets across Austin came together to raise millions for those most affected by the coronavirus pandemic in the Greater Austin area.

After an all-day telethon hosted by All Together ATX media partners on April 3, more than $4 million has been raised. Austin-based National Instruments announced it would pledge a matching gift of up to $1 million toward All Together ATX. The Moody Foundation and the Michael & Susan Dell Foundation both pledged a gift of $250,000, while J.P. Morgan donated $110,000 to the fund. Texas Gas Service announced an $80,000 donation on April 10 to five different organizations around the state, including All Together ATX. St. David's HealthCare announced April 30 a $50,000 matching gift that will begin on #GivingTuesdayNow (May 5), a global day of giving launched in response to the extraordinary need caused by COVID-19.

Funds raised will be distributed to local organizations working with people disproportionately impacted by COVID-19 and the economic consequences of the outbreak. Funds will be distributed in a phased approach, focused first on the most affected and later on long-term recovery and sustainability for the nonprofit sector. Applications are now open. The deadline to apply is 5 p.m. on April 10. Grants will be distributed electronically by May 1.

“Austin Community Foundation and United Way for Greater Austin are overwhelmed and deeply grateful for your outpouring of support," said United Way for Greater Austin CEO David Smith. "The All Together ATX Fund will continue to be here throughout this crisis for our neighbors most affected by COVID-19. [April 3] was a huge kickoff, and we’re just getting started! Spread the word and keep giving. With every donation, we are proving the world right, we really are the greatest place to live. Thank you for your heroic generosity and kindness. Let’s keep it going! AllTogetherATX.org.”

KVUE wants to thank nonprofits Austin Community Foundation and United Way for Greater Austin, as well as many other local media groups that came together to aid those impacted by the coronavirus in the Austin area.

“Thank you to every Central Texas media and business organization who helped raise funds for All Together ATX last Friday," said KVUE President and General Manager Kristie Gonzales. "These funds will go to the people who need it most. We truly are more powerful when we come together to help our neighbors in need!”

The push to raise funds is not over yet. Join Media ATX and local digital media companies, including KVUE, for a live stream on Tuesday, April 14 to raise more funds for All Together ATX. Podcaster, comedian and magician Brian Brushwood and screenwriter C. Robert Cargill will host the event.

WATCH: KVUE President and General Manager Kristie Gonzales on All Together ATX

Grocery store employee dies after being diagnosed with coronavirus