The fire started at a condo that was under construction. 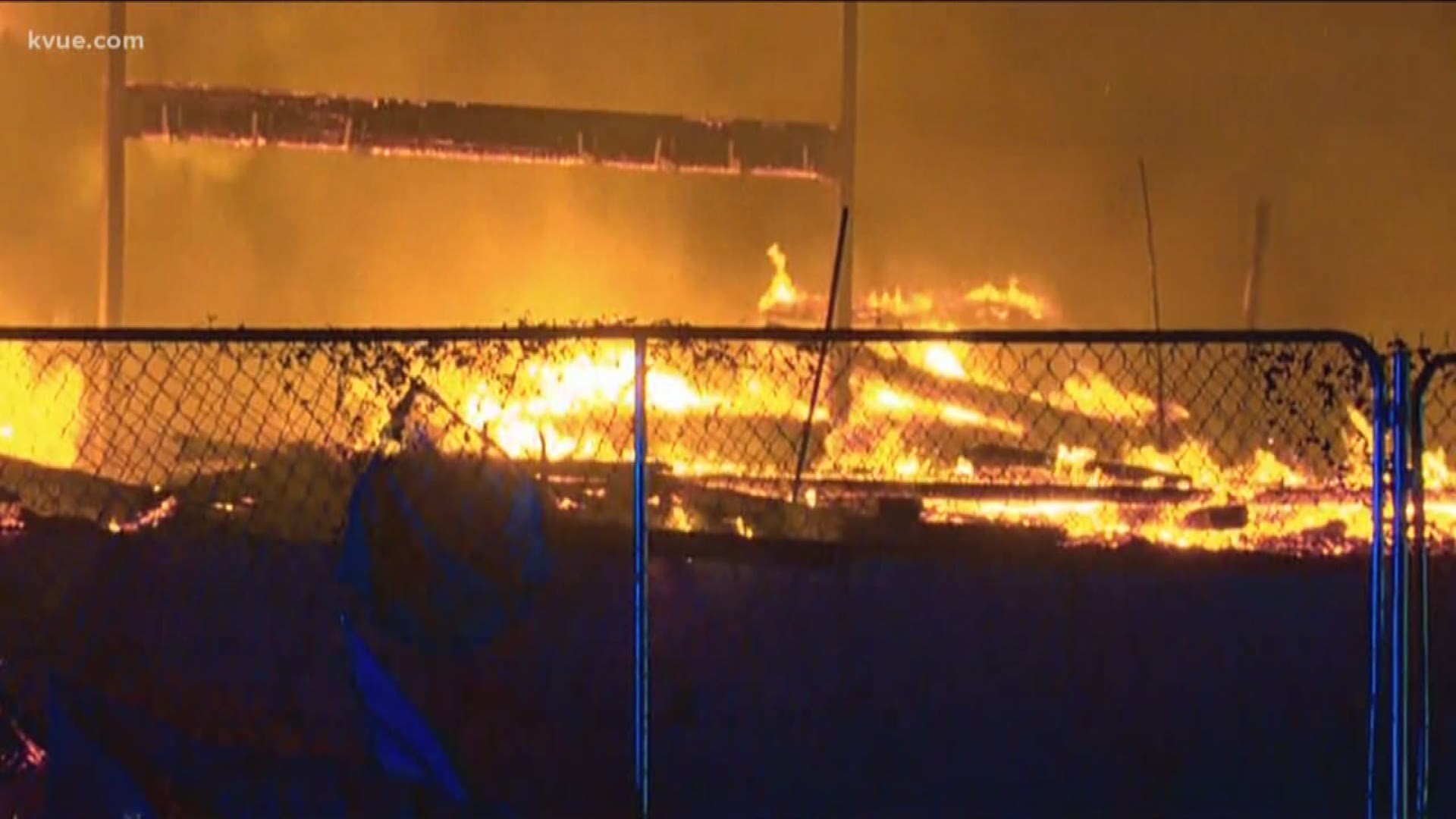 AUSTIN, Texas — Austin crews have announced the cause of the massive fire on Banister Lane nearly one month ago will remain undetermined until new evidence surfaces.

Although there is homeless activity in the area of the South Austin fire, the Austin Fire Department said it can't confirm or deny if that was a factor.

“The cause of the three-alarm fire at 4004 Bannister Lane on Sept. 19, 2019, will remain undetermined unless and until new evidence comes to light that warrants a re-opening of this case. The intensity of the blaze and the total destruction of the site make it nearly impossible to conclusively determine how the fire started. And although we are aware of homeless activity in the area, that factor can neither be ruled in nor out at this time. Any further questions should be directed to Herman Cardenas, owner of IMPACT Developers.”

All residents were accounted for after the fire destroyed two apartment complex buildings and several vehicles. The fire started at a condominium building under construction at Banister Lane near US 290 and South First Street early Thursday morning, fire officials reported.

AFD reported earlier in the morning that three people were unaccounted for, but later at around 9 a.m. said all residents are now accounted for and safe. One woman has been taken to a hospital with minor, non-life-threatening injuries that happened while she was evacuating.

Red Cross said they have arrived at the fire and they are meeting with residents to assist as needed.

At 3:41 a.m., the Austin Fire Department got a call from a neighbor across from the condo, reporting the fire.

The first crew arrived within four minutes of that call. When crews got there, they found a three-story condo that appeared to be in the initial stages of construction and that was not protected by sheetrock.

"It was burning from end to end, and completely involved in fire," a fire official said later in the morning.

As firefighters started to work on the fire, they quickly realized that there were occupied apartment complexes surrounding the condo that were starting to catch fire.

Nine vehicles in a nearby parking lot, along with construction equipment, were burned in the fire.

Fire officials believe that there were no construction crews on the site of the condo before the fire started. They are working to find a cause of the fire.

Neighbors who evacuated nearby said flames and debris rained on their apartments as they tried to find a safe place outdoors.

One nearby resident told KVUE he only had a few minutes to escape to safety.

“By the time I grabbed my things, my dog was ready to get out,” he said. “It was already coming in through my laundry room window. By the time I got outside of my apartment, it was spreading and neighbors were going around knocking on doors to get everyone out.”

More than 1,000 people in that area were without power because power lines caught on fire, according to officials. Austin Energy said their crews are working to make sure the area is de-energized and safe for firefighters.

Austin police said the nearby Galindo Elementary School will not be impacted by this fire. The campus will run under its normal schedule, according to police.

Crews said they're working to get ahold of apartment management at this time.

The AFD later reported that only one civilian was injured throughout the incident and one firefighter was treated for dehydration. The department also reported that several pets may not have made it out alive.

Damages are estimated at $2 million.

The Austin Disaster Relief Network will be assisting survivors.

They are accepting donations here.