State leaders hope by filing the objection, they can better address concerns the court has, in order to ultimately help the children in the foster care system. 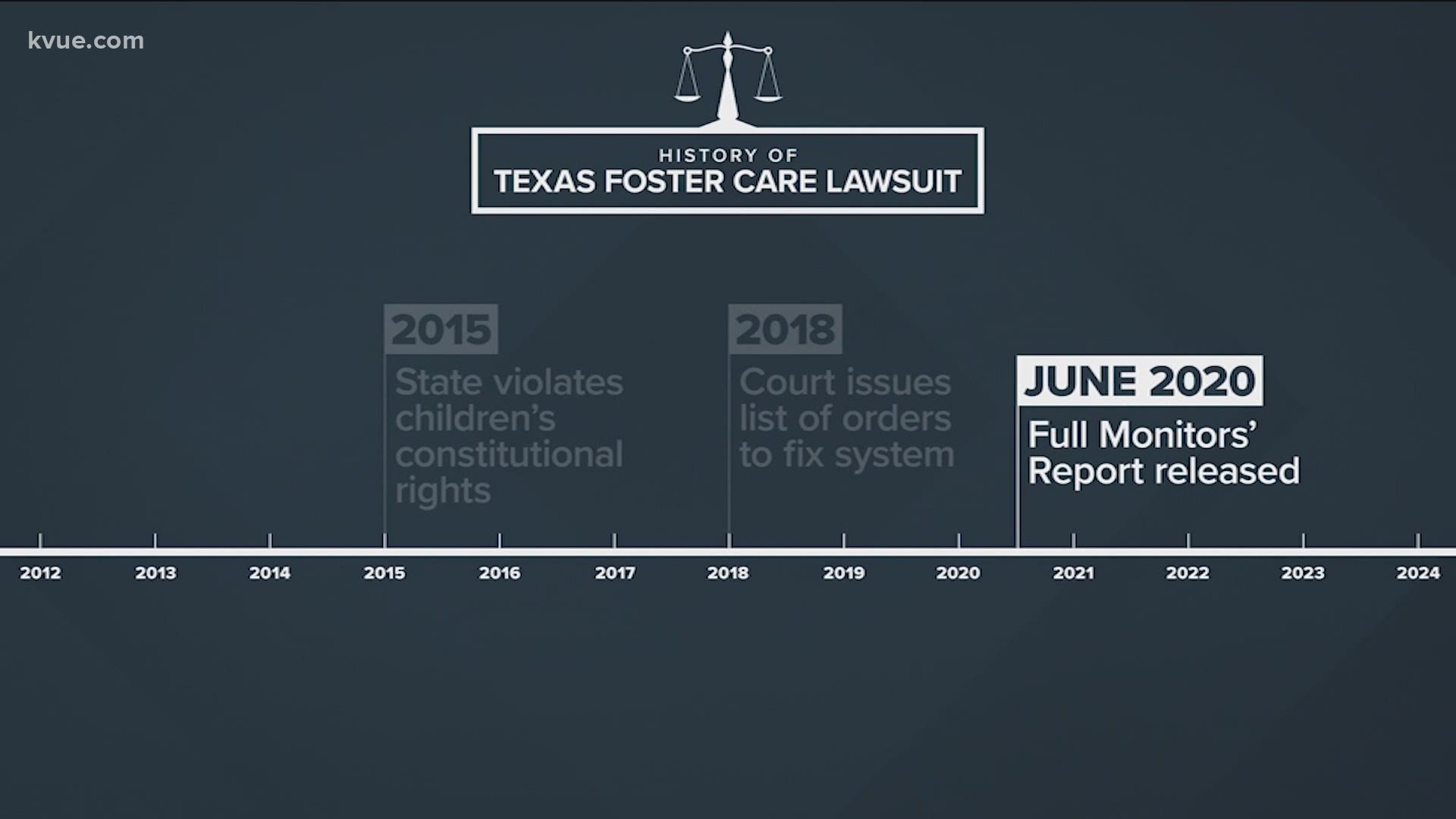 AUSTIN, Texas — Almost a month after a several hundred-page report came out expressing significant concerns over the reportedly dangerous state of the Texas foster care system, Gov. Greg Abbott and the state agencies involved responded with their own concerns in hopes of moving the foster care system in a positive direction.

The monitors' report released in June detailed ongoing issues and shortcomings by the State of Texas that they said put children at significant risk for abuse and neglect. They cited thousands of files, records, interviews and narratives as evidence.

On Friday, a contempt motion was filed against the State to address these safety risks, and, less than a week later, State leaders defended themselves.

According to the objection filed by the Defendants, Abbott and the commissioners of the Texas Health and Human Services Commission (HHSC) and the Department of Family and Protective Services (DFPS), the monitors placed unreasonable expectations on them, giving them little time to improve. They believe the monitors also failed to address many attempts these departments made to improve current conditions. This includes hiring more staff, including investigators, making significant changes to information technology systems, creating and revising policies and developing better practices.

"They spend much of the report on what they deem deficiencies in defendants' policies, procedures and conduct," the objection stated. "In doing so, the report fails to provide an objective analysis of the foster care system, lacks information sufficient to identify compliance expectations and, ultimately, impedes defendants’ desire to work with the monitors, plaintiffs [children of the state] and the court to comply with the remedial orders and create positive change in the foster care system."

In 2015, Judge Janis Graham Jack, who oversees the case, ruled the State of Texas was still denying children their constitutional rights. In 2018, she placed multiple remedial orders on the state to improve the system and ultimately the welfare of children in foster care. The monitors based their findings on these remedial orders.

Among multiple concerns, the monitors' report stated significant shortfalls, including the departments' delays in investigating reports of abuse and neglect, inappropriately downgraded reports, a poor communication system between the two departments that caused these issues to fall through the cracks, a shortage of caseworkers and a backlog that led to kids getting harmed or even dying while in State care.

The filing acknowledged the "tragic" deaths of the three children in care this year.

"When any tragic outcomes are seen, defendants assess what led to those outcomes and try to learn to inform ongoing efforts to support the safety of children and youth in care," the report stated.

But the objection acknowledged that State leaders involved in this case felt the report was unfair. On multiple occasions, the monitors mentioned areas where the departments fell short, yet they never made department leaders aware so they could fix the problem, according to the filing.

While the agencies tried to improve as quickly and efficiently as possible with the resources they had, they felt they were not given clear thresholds to meet.

In one example, the objection claimed the monitors failed to acknowledge DFPS' attempts to address backlogs and reporting issues. Since the department was given the remedial orders, it hired 20 new investigators and nearly completed a backlog reduction project to improve how quickly and how many investigations it completed.

But the monitors were concerned many reports of abuse and neglect were not filed at all due to disconnects in lines of communication, lapses or delays in answering the State hotline, and the children's knowledge of how to report something.

When a report was filed concerning a child, often times caseworkers were not informed about it.

However, according to the objection, DFPS took steps to address this, which they said the monitors did not acknowledge.

For example, the department improved its data system so it automatically notifies a caseworker when it is suspected a child was abused or neglected. In March 2020, its also created a Utility Assurance Team that wold formally review cases.

Can't adopt but want to help? Here's how you can foster or mentor a child in Central Texas

The monitors ultimately found many issues regarding the system stemmed from a disconnect between DFPS and HHSC. Each department used two different IT systems that did not communicate with each other. This made it difficult to track critical information like investigation histories and child maltreatment.

HHSC also faced scrutiny for not providing enough oversight or documentation over licensed placements that would lead to revoking licenses from facilities who showed concerning patterns of abuse and neglect.

The State objected to this in the filing.

The HHSC claims documents related to investigations would need to come from DFPS, not it.

DFPS noted it has made improvements to its own data system. It has also complied with the monitors' request for information. During the monitors' investigation, DFPS officials turned over nearly 85 reports, with more than 7.2 million data elements. They also put forth 3,000 analyst hours producing reports to aid the monitors.

The defendants, Abbott and the commissioners of DFPS and HHSP, hope through these objections "the path towards compliance with the remedial orders will be clear," as they pave a better path for children and youth in the foster care system.

The riskiest activities for COVID-19, according to experts