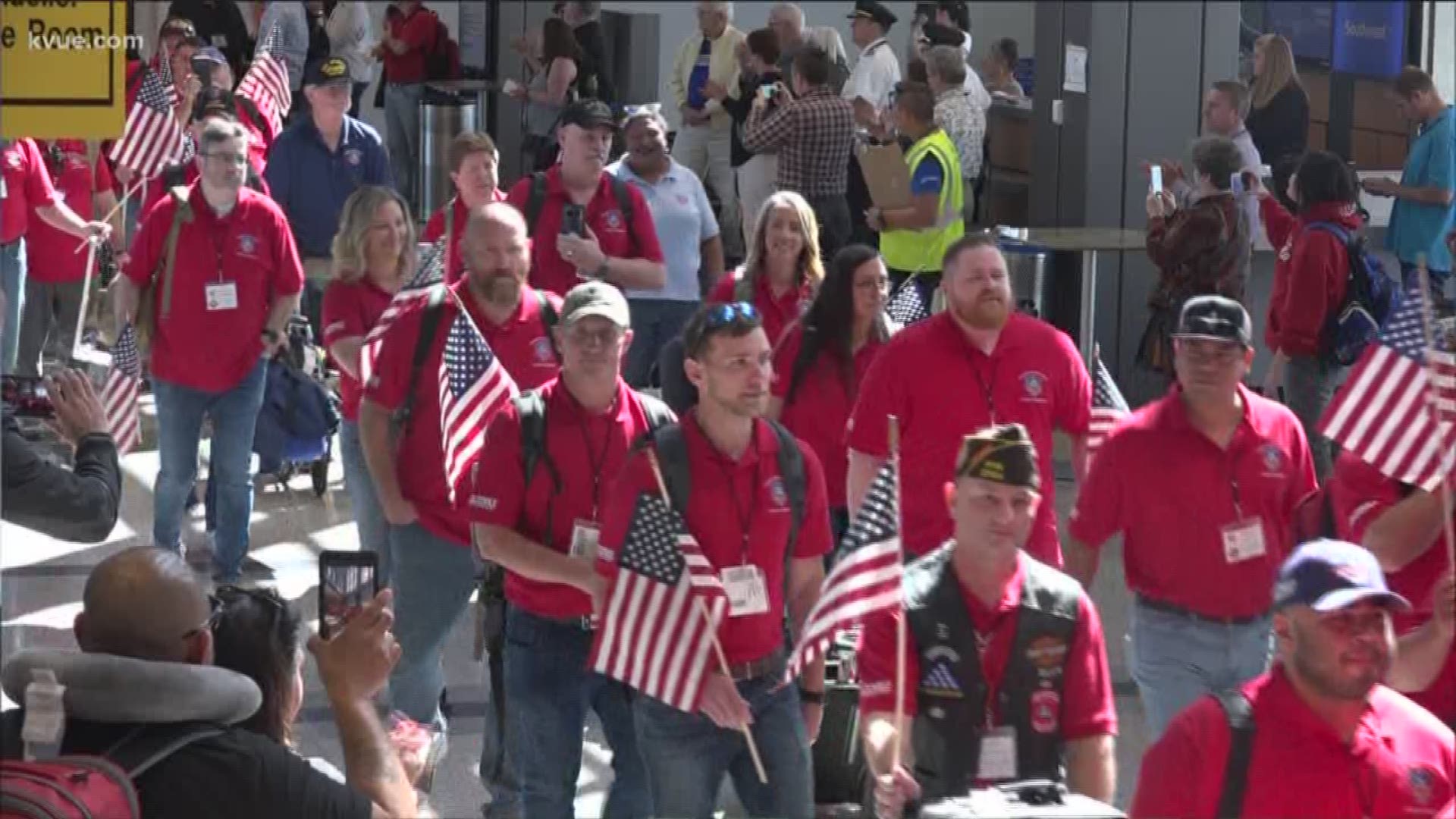 AUSTIN, Texas — Honor Flight Austin just took their second flight of the year, and 58th flight ever to Washington, D.C.

Approximately 60 veterans departed from Austin-Bergstrom International Airport for their special trip at about 11:45 a.m. Friday morning.

These Austin-area veterans were from the Gulf War, Operation Iraqi Freedom and Operation Enduring Freedom, and for many vets on board it was their first time on an Honor Flight.

"I was honored to be asked, because you know, this is mostly for World War II, Vietnam vets, Korea, people like that, and I'm sure I speak for everybody, we don't feel like that we're old enough yet to be part of this flight," said Patrick Stockwell ahead of his first Honor Flight. "So, to be a part of it and go up to D.C., and see everything is pretty special."

Stockwell served in the Marine Corps from 1983 and 1986. He joined the Army Reserve in 2006, went to Iraq three times and Afghanistan once. He retired just last year, and says to be around this many veterans again feels refreshing and familiar all at the same time.

"Oh it feels like old times, around veterans. You can talk like you want, say what you want, and talk about some stuff that other people just don't understand."

For Blair Didion Sr., it was also his first time on board an Honor Flight.

"It's been good seeing a lot veterans sharing stories and I'm sure that's going to grow throughout the weekend and I'm just looking forward to it, really getting a chance to see the different memorials and monuments and everything. I'm a firm believer in creating your strength out of the past of others."

Didion served 13 years in the U.S. Army as a medic with three tours to Iraq and one to Afghanistan. He shared he's looking forward to visiting the different memorials and monuments as well as finding another outlet of support among a group of people who, though may have served at different times and in different places, but who can relate to some of the same experiences and struggles.

"I think it's huge because with the prevalence of concern over PTSD and different things, getting veterans into our community and involvement with each other I think is huge," Didion said.  "So an event like this where we get 36 hours within that community and building relationships with the area, we can come back, and I'm sure I'll have five or six new people that I can reach out to when I'm having a bad day which is a key thing for all military veterans."

The veterans assembled with guardians and staff for a procession from the security checkpoint through the terminal to Gate 21.

The veterans are scheduled to return to Austin on Saturday at 5:30 p.m.

This Honor Flight Austin flight was sponsored by 22KILL, a non-profit organization committed to researching and understanding issues related to suicide.

Alcohol and ice cream? This Austin shop is serving up the perfect pair