The girl was getting off the bus. The driver ignored the flashing lights.

11Alive uncovers more than 100 instances where metro Atlanta school bus drivers were caught on camera breaking the law, even with kids on board. 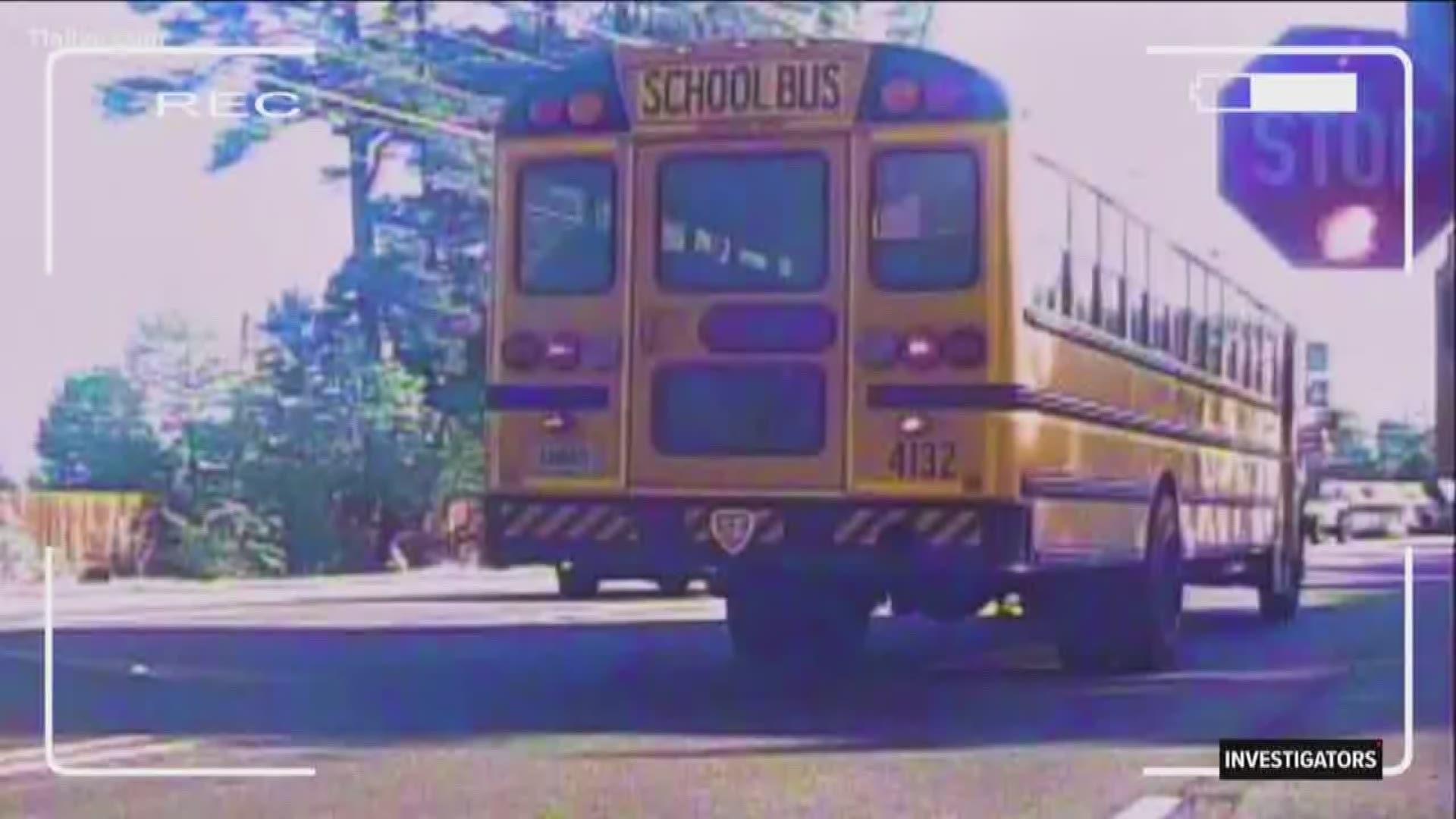 ATLANTA — Nichole Cochran ran out of her house one afternoon to find her 6-year-old daughter lying in the street.

"911. Coweta County. Operator 30 -- What's your emergency?" a voice asked on the other end of Cochran’s phone.

"It's my daughter," the mother of seven cried.

Her voice was shaking with fear, while tears welled in her eyes. "Looks like her leg's broken. There's a head injury"

6-year-old struck by car while getting off school bus

More than a year after that emotional phone call, Cochran sat down at her dinner table with 11Alive Investigator Faith Abubey to recount what happened that afternoon in October.

“I just remember just seeing her face. It was swollen so bad. It was unbelievable. It was beyond recognition,” she recalled. “I didn't know what was going on. My brain couldn't process it.”

At the time, Cochran wasn't even thinking about what led up to that moment. She was focused on her daughter, praying she'd be OK. 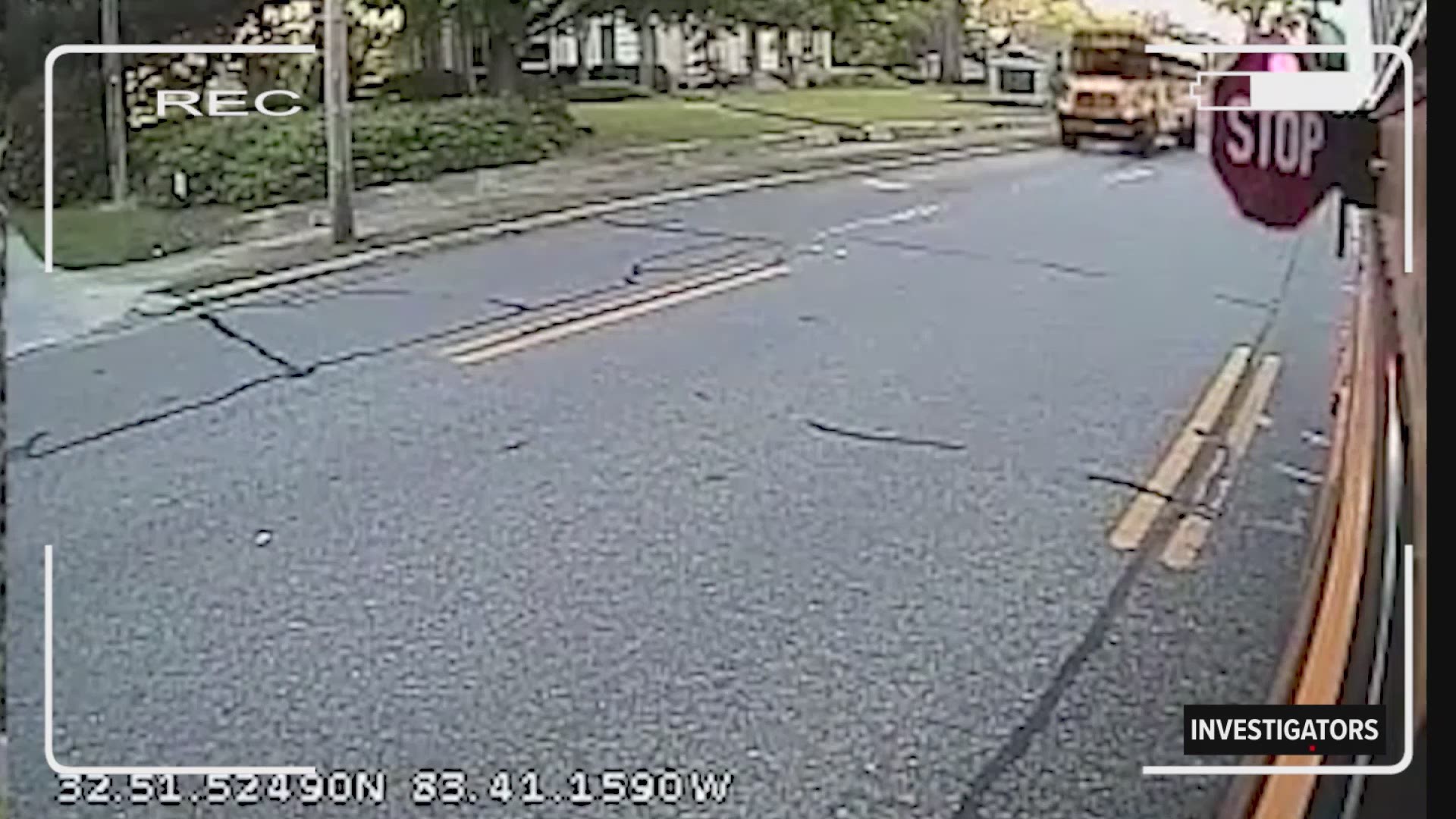 “They life-flighted her. At that point I didn't know whether I’d ever see her alive again,” Cochran said.

A police investigation has since revealed Lulu and her sister were getting off the school bus in front of their Coweta County home, when out of nowhere, Gloria Blevins allegedly sped past the stopped bus in a Hummer truck.

According to the incident report, she ignored the flashing red lights, the stop arm and plowed right into the 6-year-old girl.

Blevins was convicted of hit-and-run causing injury, and injury by a vehicle. She was sentenced to serve 20 years in prison.

The same school year Blevins hit Lulu, another Georgia child died while crossing the street to get to her stopped school bus.

Five other school children died across the U.S. in similar incidents, according to the National Association of State Directors of Pupil Transportation Services.

The district installed 300 stop arm cameras on its buses in 2015 to catch and deter drivers from illegally passing stopped school buses. What those cameras have also caught are school bus drivers, themselves, breaking the law.

An 11Alive investigation found in less than five years, there were more than 40 instances where Gwinnett County school bus drivers were fined for illegally passing another stopped school bus.

So, that's at least 80 school buses, some carrying students, that were involved in these critical violations.

“How can you say safety is paramount in Gwinnett County when you have school bus drivers, the ones who parents are trusting with their kids, violating the law, putting these kids' lives in danger?” 11Alive Investigator Faith Abubey asked Watson.

“Well, we think that we're talking about a relatively small number of cases,” Watson replied.

“But let me start off by saying this. Even one case of a driver violating this law is not acceptable. Over a 5-year period, that's 540,000 bus runs. We're talking about 41 instances of a bus driver not obeying the law. Again, not to say it's OK but we want to put this into perspective. We acknowledge that some of our drivers made poor decisions, but we don't want their poor decisions to tarnish the reputation of the overwhelming majority of our bus drivers who do a good job every single day," explains Watson.

In all, from May 1st, 2014 to January 1st, 2019, there were more than 100 times where metro Atlanta school bus drivers saw another school bus loading and unloading kids and decided to keep going, illegally.

Here is the breakdown of stop arm violations according to records 11Alive obtained exclusively under the Open Records Act.

Despite what the numbers show, it’s difficult to determine which school district’s bus drivers are violating the stop arm law more than the others. Some districts have more school buses than others and some have installed more stop arm cameras than others.

“You go into a job, and your job is to protect children. You're transporting them to and from school where they need to go. You, of all people, should know that's a no-no,” Cochran said as 11Alive showed her the videos of school bus drivers illegally passing stopped school buses. “How do you expect other people to do what you're not doing?”

Gwinnett County Schools tells us that all 41 bus drivers who violated the law were fired.

But our investigation found that not all districts have the same punishment for drivers who break the law. Some simply suspended the drivers for a few days, make them pay the violation fine, instructed them to take a defensive driving course and then put them right back behind the wheel and in charge of the safety of children.

When 11Alive asked Atlanta Public School Administrators what their discipline procedure is when it comes to their bus drivers violating stop arm laws, they refused to elaborate.

“Those employees have been disciplined in accordance with the District’s code of conduct,” APS Spokesperson Ian Smith said. When 11Alive asked details of the disciplinary action, the district would only say “Our statement stands as is.”

It was the same for Cobb County, where a district spokesperson said “each are handled in accordance with district policy” without further explaining if the drivers were fired, reassigned, or retrained.

“That’s crazy,” Cochran said. “They shouldn't be bus drivers ever again. I mean, if they're doing that, what else do they do? What other risks do they take with the children on their buses.”

Both Gwinnett and Atlanta Public Schools cited the same state law that gave other school districts the discretion to give us their videos.

“Why, in the name of transparency, won't Gwinnett county let us see these videos?” 11Alive Investigator Faith Abubey asked Watson in Gwinnett County.

WATSON: “Well, Faith. I'm not an attorney so I can't comment on that."

FAITH: “As the district representative, do you think the public needs to see these videos?"

WATSON: “Well, we've actually…some of these videos have been shown. We've done plenty of stories with local media with showing violations of cars and going through…"

FAITH: "Correct. But they were not buses passing other stopped buses."

WATSON: "Again, I don't feel comfortable talking about this."

Back at the Cochran house, the morning and afternoon routines have changed since Lulu was released from the hospital.

The mother of seven has taken the safety of her kids back in her own hands.

“I didn't want them to ride the bus again. I just feel safer that they're with me. It takes a good hour, hour and a half out of my day but I don't mind,” she explained.

Cochran still worries about the parents who don't have the luxury to do the same.

"These are children. These are people's babies. We trust that they are safe getting on and off the school bus. And they should be. They should be,” says Cochran.

The Reveal, a show dedicated to investigations that make an impact, airs Sundays at 6 p.m. on 11Alive.

Are bulletproof backpacks worth it? Parents mull decision in wake of school shootings

Gone Cold | The Doll and the Monster