University of Texas researchers studied how children are lured and controlled by sex traffickers in Texas. 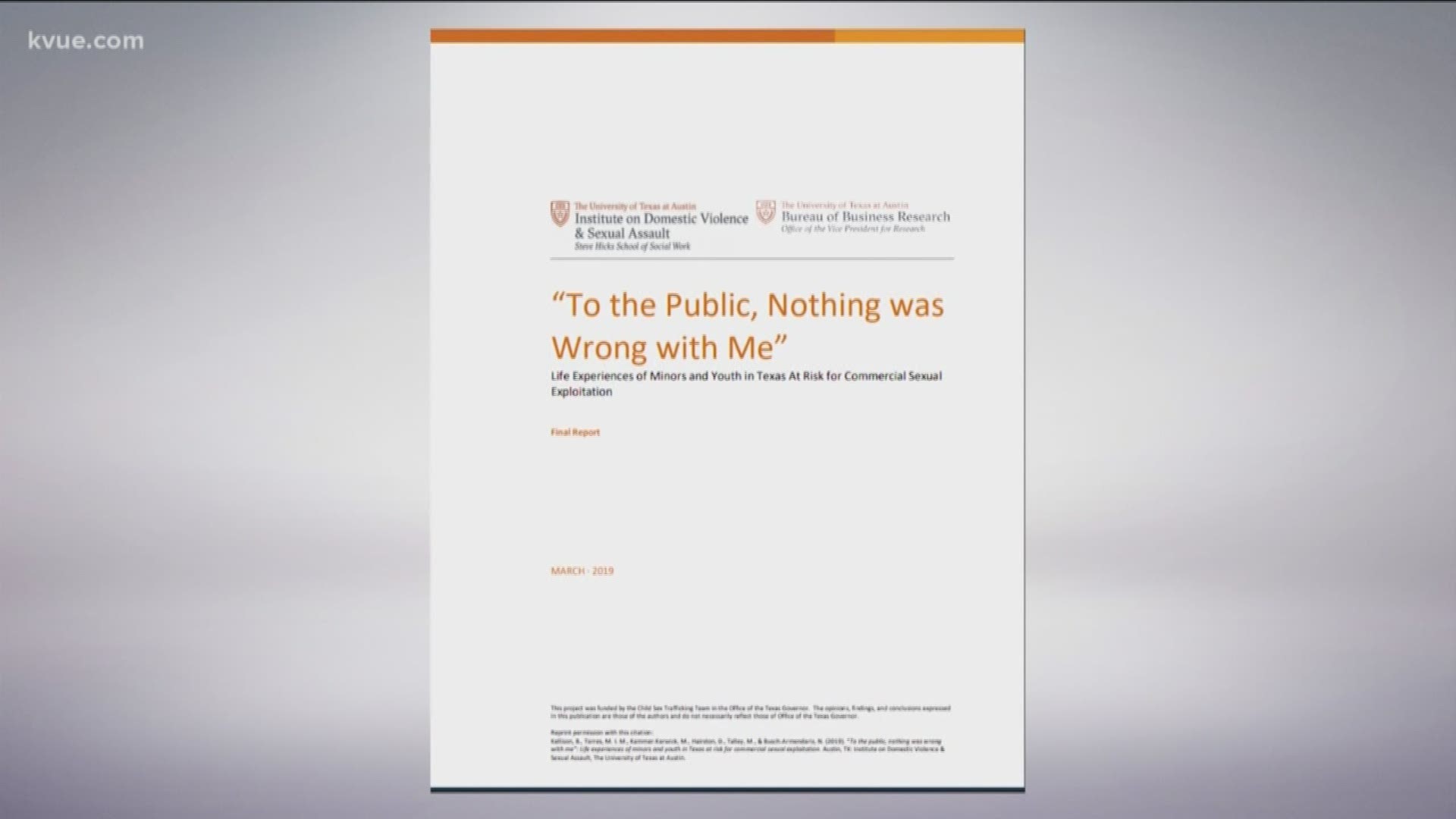 AUSTIN, Texas — Researchers from University of Texas said they now have a better understanding about sex trafficking.

A study recently released called “To the public, nothing was wrong with me” looks at how teens become a risk factor for sex trafficking, how they exit the life and how they re-enter into trafficking and/or other exploitative situations.

Governor Greg Abbott asked UT researchers to do the study. The Child Sex Trafficking Team in the Office of the Texas Governor paid for it.

The study looks at a variety of factors involving sex trafficking and tells personal stories with the identities kept private.

The study found a girl was trafficked in Austin from a pimp she met at a gas station in Houston.

“…she did not have a ride back to her house. The pimp took her to Austin and she says, ‘That was it.’ Her pimp took her social security card and ID. She says that if she had just had a ride home that first night, ‘It could have prevented a lot.’ (Her) biggest fear during her exploitation was that someone was going to kill her or ‘get crazy cause they didn’t like what they got.’ She also feared undercover cops. She worked on the street and would get hotel rooms when needed or engage in commercial sex with individuals in their cars,” the study reads on page 60.

Researchers and state leaders with the Texas Governor’s Child Sex Trafficking team held a webinar Thursday with people who work with trafficking victims and survivors.

“For the state to spend the resources of time and money to discover or try to discover the size of this problem is excellent,” Steven Phenix, Director of PR and Communications for The Refuge for DMST, said.

The Refuge for DMST (Domestic Minor Sex Trafficking) is the largest long-term residential facility in the country and is based in Austin.

Even though The Refuge wasn’t open when the study began, long-term therapy-based residential facilities like The Refuge were not part of the study. Researchers, instead, looked at other service organizations providing a variety of care levels. Researchers also spoke with teens in the juvenile justice system.

Even though the study was paid for and supported by the governor’s office, researchers met difficulties when dealing with the Department of Family and Protective Service who runs the foster care system.

RELATED: 'You're a living individual in shackles' | A fresh start isn't easy for Texas trafficking survivors

“The research team submitted a proposal to the Department of Family and Protective Services (DFPS) IRB in September 2017 seeking permission to interview youth currently in the care of the state. The protocol went through a series of revisions from DFPS in October 2017. The research team agreed that all of the requested revisions were necessary and strengthened the overall protection of participants in the study beyond just those in DFPS custody. DFPS ultimately denied the proposal in November 2017, which prevented the research team from interviewing any youth currently in DFPS Life Experiences of Minors and Youth in Texas At Risk for Commercial Sexual Exploitation 134 foster care and/or in DFPS custody. Therefore, the research team was able to collect data only on participants’ experiences with the foster care system based on their recollection of past experiences,” the study shows on pages 133 and 134.