Travis County Clerk Dana DeBeauvoir said even if these voters do not submit a corrected ballot, their vote will still count. 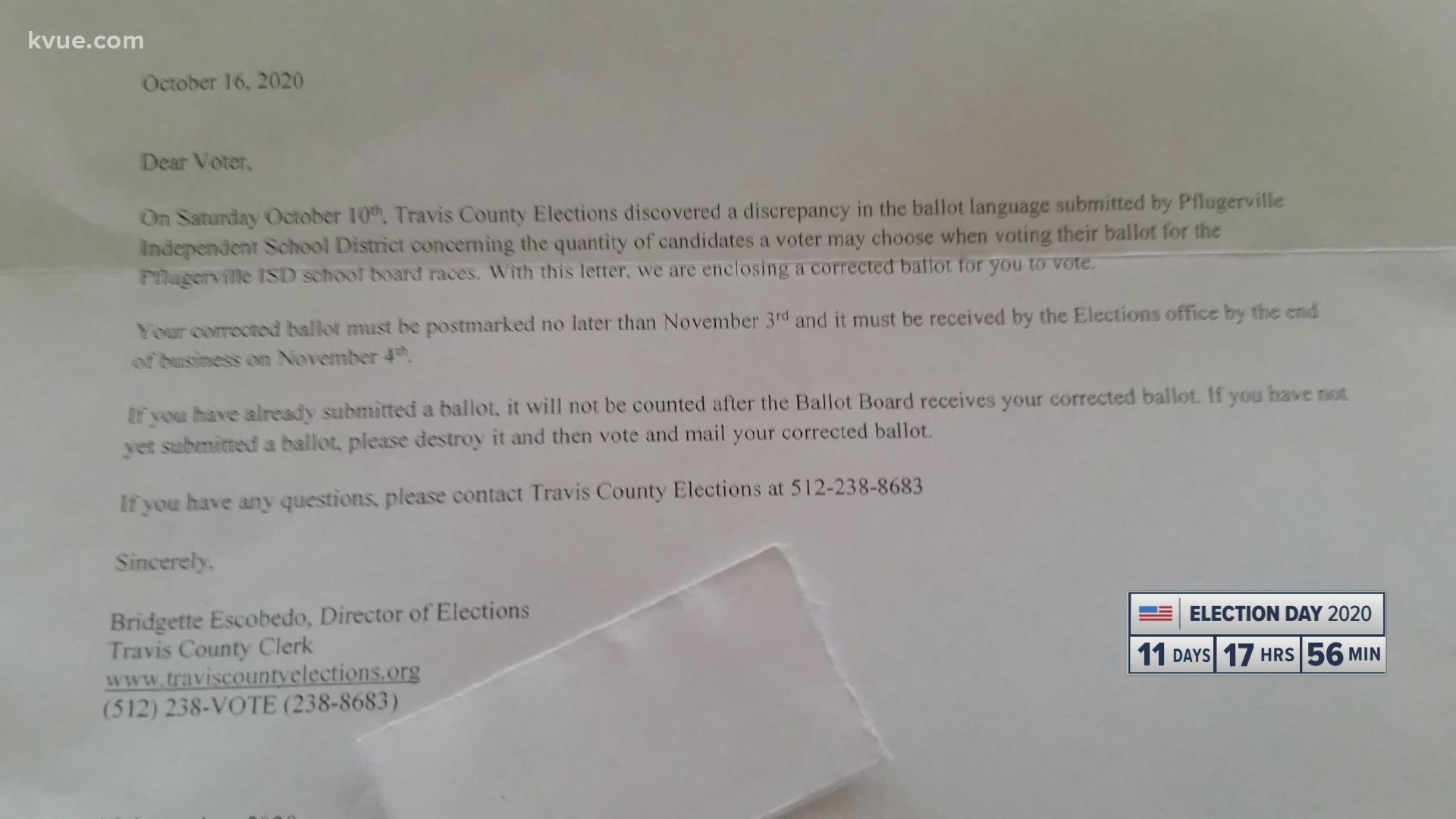 AUSTIN, Texas — Travis County is asking about 13,600 voters to fill out a new, corrected ballot after election officials made two errors on the original ballot.

“You'd think something as important as this, they would be a little more careful in reading what was submitted and making sure it was all correct,” Travis County voter Bill Braswell said.

Some voters, like Braswell, received a letter in the mail recently. The letter explains Travis County made an error on the first mail-in ballot he received, and includes a new ballot with instructions for re-submitting.

Braswell said the language on the ballot was unclear, so he was worried his vote might not count at all. He’s also confused about how this happened in the first place.

Credit: Bill Braswell
About 8,000 voters in Travis County received a letter telling them their first mail-in ballot had an error on it, so they should fill out and submit a corrected ballot.

“I think it's very confusing, especially the inadequacy of the letter they sent out with it,” Braswell said.

“How does a mistake like this happen, especially during a presidential election and especially with mail-in ballots having gone out for a few weeks now and early voting now more than a week underway?” KVUE Defenders reporter Brad Streicher asked.

“Well, one of them was just instructions,” Travis County Clerk Dana DeBeauvoir said. “The other one was trickier that had to do with single-member districts. And we both missed it. And we regret that.”

The second error happened for the Barton Springs Edwards Aquifer Conservation District. DeBeauvoir said they failed to recognize boundary lines and gave people living outside a single-member district the opportunity to vote in that race.

“Right now, I'm not worried about it affecting the process, but I am worried that it will add to people's worry that their vote-by-mail ballot somehow or other isn't going to count,” DeBeauvoir said.

DeBeauvoir said even if people do not send in a corrected ballot, their vote will still count. She also said the County fixed both problems quickly.

“We found the error, we corrected it and we were up all night the night before early voting, started trying to make sure that this got corrected,” DeBeauvoir said.

If you got a mail-in ballot with an error, Travis County would have mailed you a letter with a new ballot and instructions.

If you have questions, contact the Travis County Clerk’s Office.