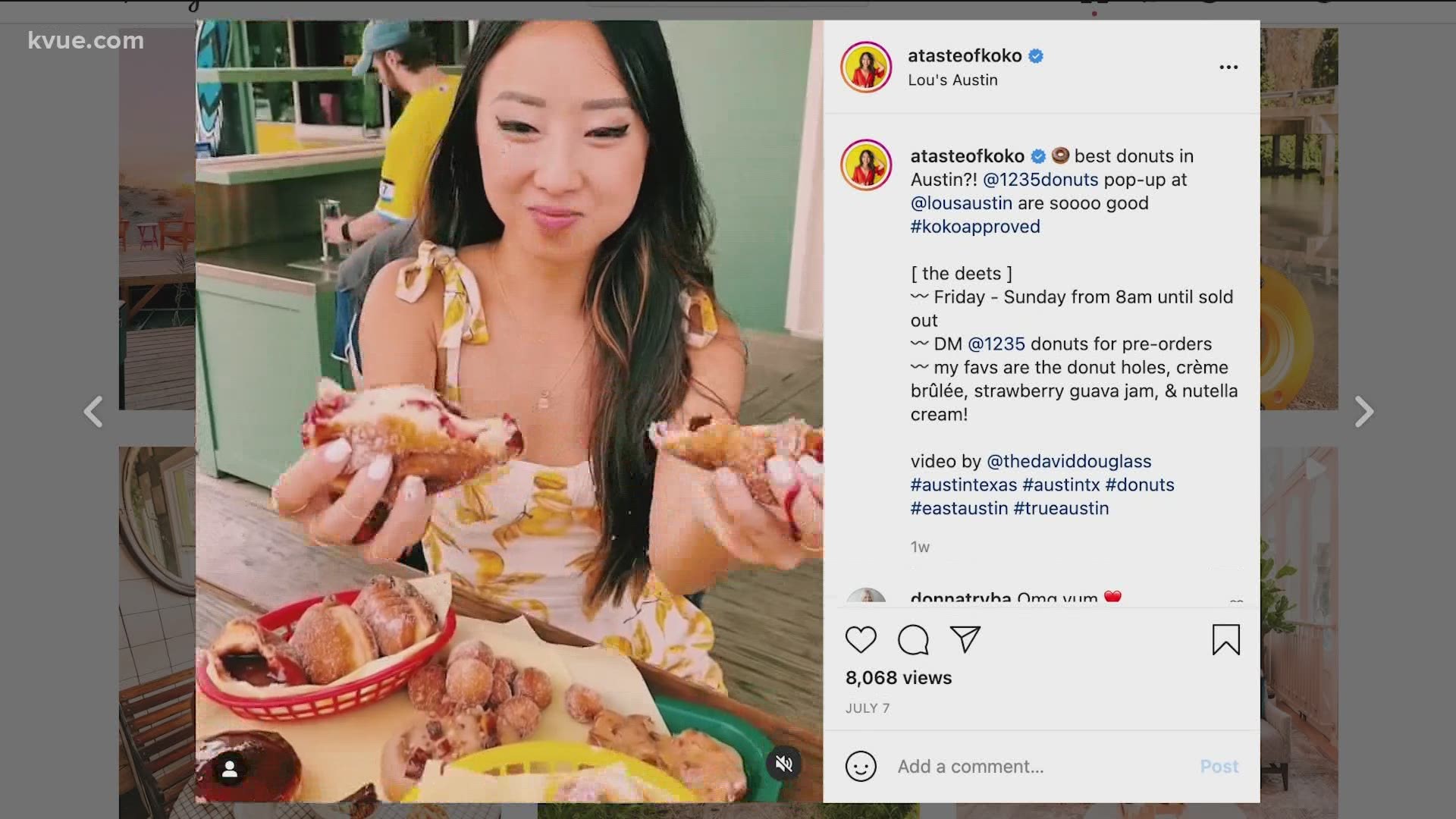 But the KVUE Defenders found out that you are also paying social media influencers.

That’s because the State of Texas is using taxpayer money to fund influencer marketing campaigns that promote travel to the state.

"This journey has been really long,” said Jane Ko, blogger at A Taste of Koko. "I mean, I feel like I went down the bunny hole in college and now 11 years later, I'm like, 'How did I get from point A to point B?'"

Ko runs one of Austin’s most popular Instagram accounts: A Taste of Koko. Since she started blogging about Austin 11 years ago, her account has grown to more than 100,000 followers.

"There's people who have followed me for a decade," Ko said. "There's people who might have just started following me yesterday. But they're coming to me because they trust they like what I'm sharing, but they also trust my judgment."

Running A Taste of Koko is Ko’s full-time job, and she’s worked with hundreds of restaurants and brands.

She’s also one of 18 social media influencers who have been paid by the State of Texas since 2019.

"I was very excited to work at the State of Texas," Ko said. "I've been here basically my entire life, and I love Texas. I probably will never leave."

Texas contracted with five of those influencers multiple times – two or three campaigns each. Ko has been paid by Texas three times since 2020.

She said that’s money well-spent because working with influencers is now one of the most effective forms of marketing.

"I think that it is the most cost-effective way just because of the amount of reach and instant ROI [return on investment] that you can generate," Ko said. "And based on like, platforms like TikTok, that is very video-based, it brings a destination to life."

A spokesperson for the Office of the Governor's Economic Development and Tourism Division sent KVUE the following statement in response to our request for an on-camera interview:

“Travel Texas partners with social media content creators, often referred to as influencers, to highlight the state as a destination of choice for travelers. Content partnerships with Travel Texas are thoroughly vetted by the experts at our social media agency to ensure they will deliver a return on investment in line with industry standards for successful content views and engagement. Influencer content is an effective way to highlight many different aspects of travel around the state of Texas to highly tailored audiences based on their personal interests, location, age and more. Currently, Travel Texas works with influencers as part of its larger social media strategy. Influencer partnerships account for a small portion of the overall Travel Texas marketing budget and are utilized in a highly strategic manner.”

Ko said she’s excited about working with Texas because promoting the state is something that comes naturally to her platform.

"Whether it's things to do in Austin or where to eat. But even going outside of the state, any brand that works with me knows that they're going to get access to a certain demographic that they might not be able to get access to," Ko said.

The spokesperson for Travel Texas said in 2019, $83 billion in travel spending led to a $169.8 billion impact on the Texas economy.