Nearly 1,500 people have died in police custody in Texas since 2010, data shows

The data also shows more than 250 of those deaths happened while the suspect was restrained by law enforcement. 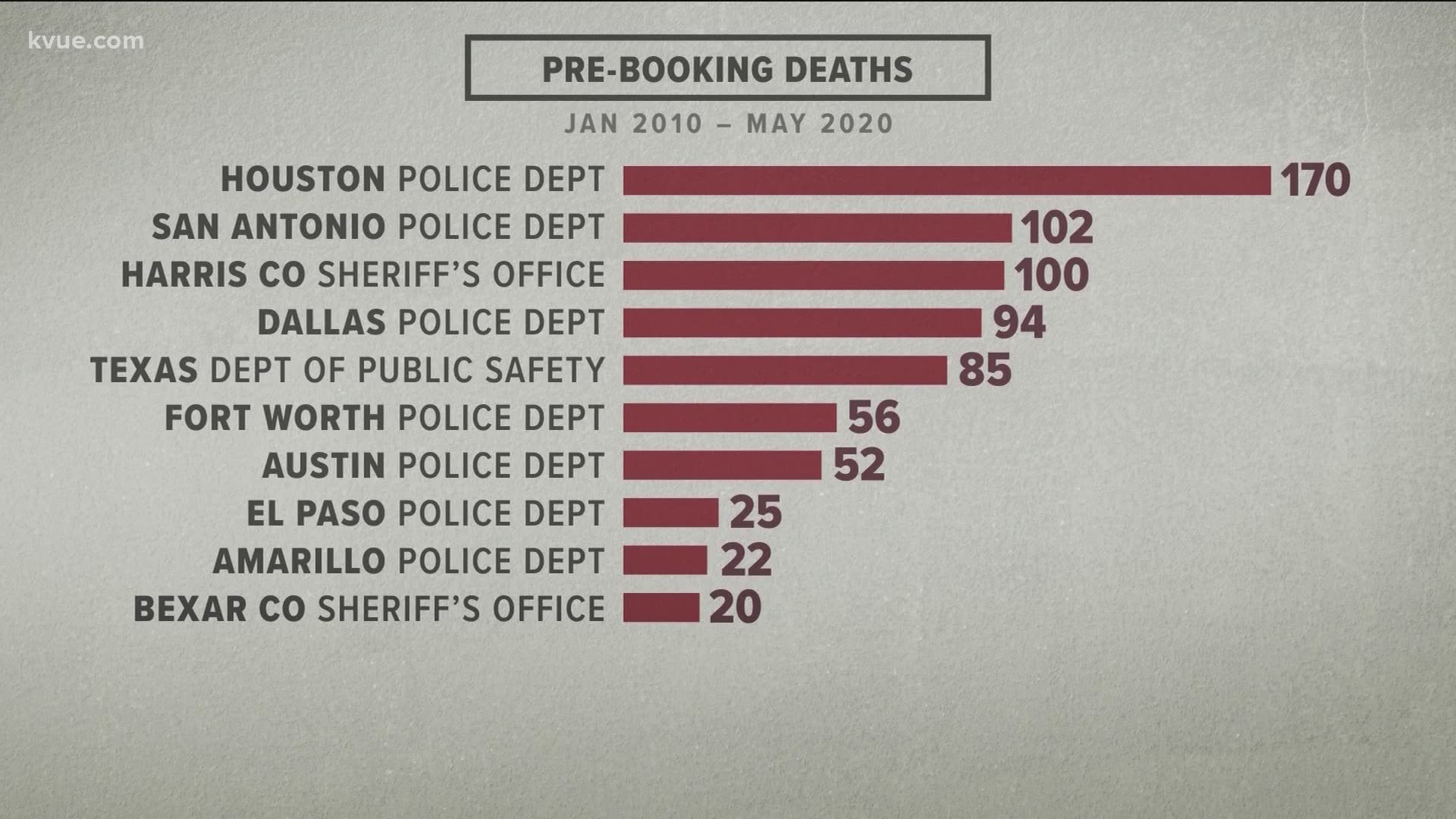 AUSTIN, Texas — Since 2010, in Texas, nearly 1,500 suspects have died in police custody before they ever got booked into jail.

Records the KVUE Defenders uncovered show hundreds of them died while physically restrained by officers or while in handcuffs.

It’s information Texas law enforcement agencies are required to report to the State. But the KVUE Defenders found the State has minimal requirements for those reporting this information – and for what's done with it after.

That’s why some say details about these deaths are sometimes incomplete, inconsistent and confusing.

Video obtained by the KVUE Defenders last month provided the first look at the 2019 death of Javier Ambler. Williamson County sheriff's deputies pursued Ambler for 22 minutes into Travis County after they tried to stop him for failing to dim his headlights.

Eventually, Ambler crashed and deputies tried to restrain him. The video shows Ambler warn deputies he can't breathe, and he has congestive heart failure.

After a struggle that lasted several minutes, Ambler was dead.

Coleman has helped lead the charge for criminal justice reform in Texas, including the Sandra Bland Act. That law passed in 2017 and is aimed at ensuring mentally ill suspects get treatment and officers receive de-escalation training.

Bland was found dead in a Waller County jail cell following a controversial traffic stop by a Texas Department of Public Safety trooper in 2015.

"We don’t know what’s going on until we know actually how it’s impacting people," Coleman said.

Police agencies across the state are required by law to report in-custody deaths to the Texas Attorney General’s Office. But the KVUE Defenders' investigation found the data is inconsistent and unorganized and the agency doesn’t do anything with it once it's gathered.

Lawmakers say we should be doing more to study and learn from that data.

Following the report on Javier Ambler’s death, the Defenders obtained the data gathered by the AG's office showing police custody deaths. But given how "dirty" that data is, we also reviewed a set of the AG's data cleaned by the Texas Justice Initiative.

The data shows that since 2010, 1,454 people have died in police custody before they even got to jail. The largest departments policing the most people in the state top the list – like Houston with 170. And the Austin Police Department ranks seventh with 52 custody deaths reported.

Credit: KVUE
The largest departments policing the most people in the state top the list, like Houston with 170 deaths.

"This is the most egregious thing that can happen to an individual when the government is dealing with them – they can lose their life," State Rep. Joe Moody said.

Like Coleman, Moody has also worked to strengthen transparency requirements for law enforcement in Texas.

"I hope that now, in this moment, there is an urgency to do something," Moody said.

The Defenders' analysis also found 261 of those 1,454 in-custody deaths were reported to happen while the suspect was under some form of restraint, which isn’t clearly defined but could mean with handcuffs or another device or technique used by the officer.

Credit: KVUE
261 deaths in police custody in Texas happened while the suspect was under some form of restraint.

Again, Houston police have the most, but APD is in the top five, reporting 11 deaths while suspects were under restraint.

The Defenders also looked at the reported race of each person who died in police custody while under restraint. Since 2010, the data shows 94 white suspects, 82 Hispanic suspects, 81 Black suspects and four suspects labeled as “other.”

"Thirty days into an incident, we’ve done a lot of, you know, the bulk of our interviews," APD Commander Pat Connor said. "But there’s still a lot of physical evidence that we’re still processing and going through, so there may be questions that are unanswered."

Connor said they rarely get feedback or follow-up questions from the State, and the law only says agencies have to give a "good faith effort" when they’re reporting those details.

"The person that’s filling it out answers the questions to the best of their ability to include the information that, from the investigation standpoint, we’re comfortable releasing publicly," Connor said.

That could explain some of the problems with the data.

Moravec launched the Texas Justice Initiative website in 2017 because she wanted to fix problems with and re-publish criminal justice data released by the State – like in-custody deaths.

"Holistically, there’s nothing that’s done to kind of take a look at all of these incidents and make some sense of them," Moravec said.

A spokesperson for the AG's office responded to KVUE’s request for comment, providing the following statement:

“As designated by the Texas Legislature, the OAG is a repository for custodial death reports; however, if the OAG is made aware of a missing report, we reach out to the law enforcement agency in question and request the report be located and sent to our office. It is the duty of local law enforcement agencies to locate and file any missing reports, of which the OAG receives a copy. Any individual or entity aware of a missing report may inform either local law enforcement or our office of the missing information. In addition, the jurisdiction for a complaint of failure to report is with the local district attorney for the non-filing agency.”

NEW AT 10: We obtained state data showing us how often people die in police custody. Many times, it happens while someone is under restraint.

Texas Attorney General Ken Paxton also recently wrote an op-ed for the Austin American-Statesman where he said, “My office is not empowered to investigate these deaths, nor has it been given the jurisdiction to prosecute such cases. Instead, the law permits the attorney general to simply act as a filing cabinet.”

After KVUE’s investigation, lawmakers say they plan to push for better use of this data, like State analysis and published reports.

"I’m going to work to make sure that we demand better – that we have real accountability ... to make sure that the information we do keep can lead us to better results in each one of our communities," Moody said.

"Texas has been in the dark, I guess I would say, when it comes to the use of data and the correct collection of data," Coleman said.

Coleman also recently introduced a new partnership from Texas A&M University to analyze law enforcement racial profiling data. He said he now wants to include the police custody deaths data to study for trends that could help with better training of police officers.