The KVUE Defenders analyzed months of data to find out which Central Texas school districts have seen the most COVID-19 cases among staff and students. 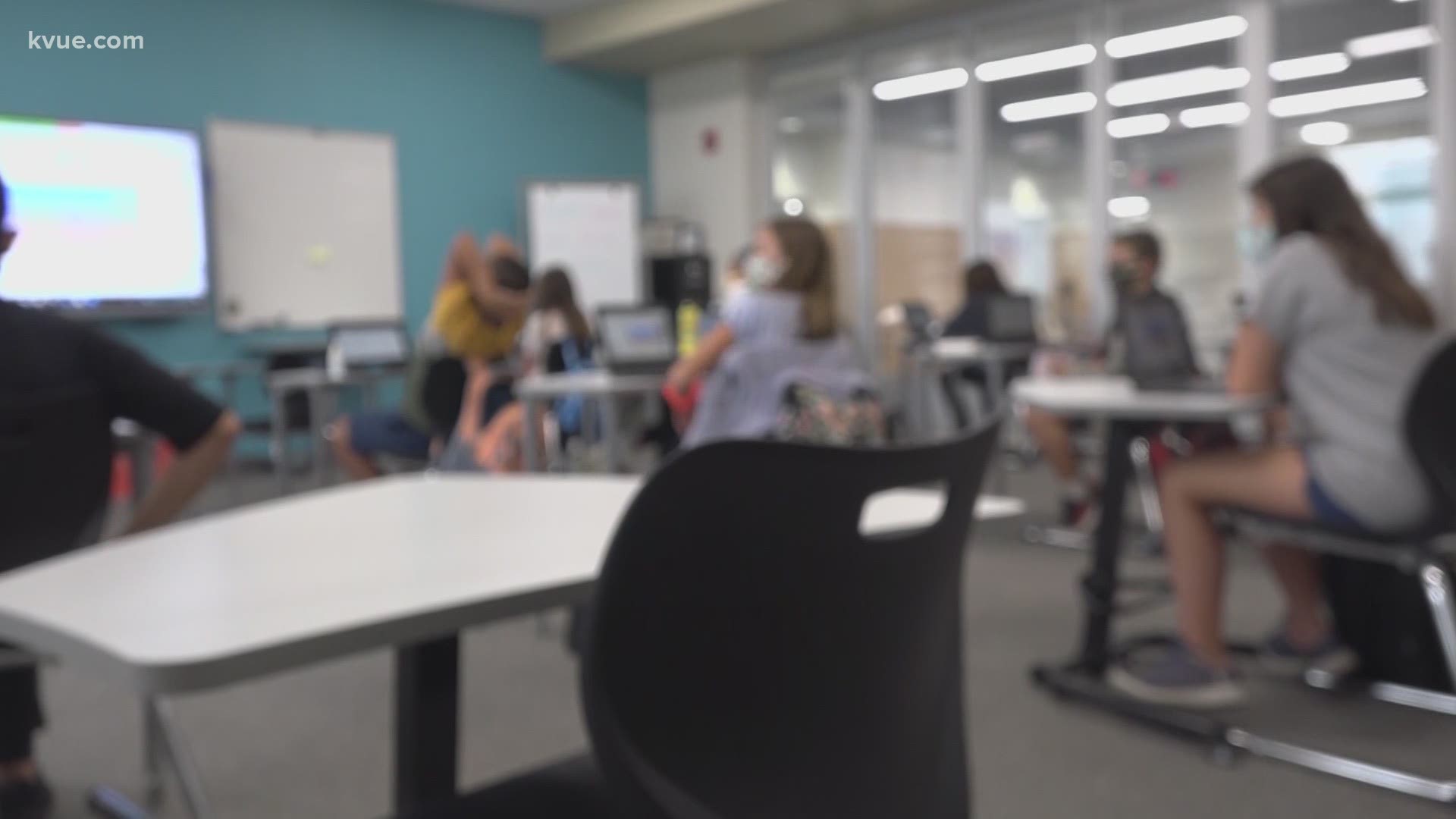 Students learning on campus are seeing fewer kids in classes and peers with masks on all day. Meanwhile, a lot of students are still learning online from home because their parents don’t feel it’s safe to return to campus yet.

“I do not feel like it's safe to send my kids in school right now,” Round Rock ISD parent Adrienne Thiesing said. “We're in a pandemic. This is once in a lifetime and I'm OK with having them home for a little while until cases can get down, death rates can get down and we can get everything back in control.”

Thiesing has good reason to be concerned.

Data from the Department of State Health Services (DSHS) shows the number of Texas public school students and staff testing positive for COVID-19 each week has been growing exponentially since the start of the school year – except for the last two weeks, which were impacted by schools closing for the winter storm.

Credit: KVUE
Data from the Department of State Health Services shows COVID-19 cases have been on the rise since the beginning of the school year, except for the last two weeks, which were impacted by the winter storm.

A Round Rock ISD teacher told KVUE she’s worried, too.

In Central Texas, DSHS reports at least 8,608 total cases of coronavirus among students and staff since August 2020.

A spokesperson for RRISD offered an explanation.

“Round Rock ISD has less students and staff than Austin ISD, but the district has had far more COVID-19 cases, really by a long shot — can you explain why,” KVUE Defenders Investigative Reporter Brad Streicher asked.

“We have fewer students overall, but we have more students on-campus,” RRISD Chief of Public Affairs and Communications Jenny Lacoste Caputo said. “I don’t have the Austin ISD number in front of me right now, but we have a significant amount of our student body going to campus.”

LaCoste Caputo said teachers, students and parents can report if people aren’t following coronavirus protocols on district campuses. But she also said the high number of cases makes sense because of trends in the community.

“What we're seeing is when we have higher rates in the community, that's when we see the rates go up on our campuses,” LaCoste Caputo said. “So the community level really affects and impacts the school level.”

Credit: KVUE
DSHS data shows these five school districts in Central Texas have had the most cases of COVID-19 among students so far.

But looking at cases among staff, AISD has seen 453 cases, which is just under Round Rock’s 460 cases. Some AISD staff say they feel especially at risk.

“We are making sure to implement CDC and health authority guidelines from Austin Public Health,” AISD Director of Health Services Alexandra Copeland told KVUE. “So we do require masks to be worn at all times. We do implement social distancing when feasible. And one thing that we have implemented on our campuses is rapid testing that's available for all students and staff.”

Now, many people are pushing for teachers to be included in the next group of people who get the coronavirus vaccine.

The RRISD teacher KVUE spoke with said if teachers have to keep going to campus, vaccine eligibility needs to be a priority.

“I would one hundred percent feel so much better if we had the opportunity to be vaccinated, and I think that it needs to be a push for our district and for districts around the state to vaccinate and have our teachers included in the next round of vaccinations,” she said.

A spokesperson for DSHS responded to KVUE’s request for a statement, saying, “The Expert Vaccine Allocation Panel is still discussing who will be eligible for vaccination in the next phase.”

That APH spokesperson also said they have reached almost every teacher in those categories in local school districts.

We found out which school districts have been hit hardest by #COVID19. Our team looked at months of data from @TexasDSHS and asked some of those districts if they're doing enough to keep the community safe.

The full story airs tonight at 10 only on @KVUE. pic.twitter.com/rY8pZcb4Rb

But Austin Health Authority Dr. Mark Escott said a few weeks ago that the rampant spread of the virus on local campuses is forcing closures.

“There has been a significant impact on the schools related to the staff members who either have had COVID or who have been exposed to COVID,” Escott said. “We've had some schools that have had to close down grade levels because of the impact on faculty.”

It happened just a few weeks ago with Pflugerville ISD shutting down Pflugerville High School due to a coronavirus exposure among staff.

That threat is another reason Thiesing said she doesn’t plan to send her daughter back to the classroom any time soon.

“It's just very scary right now,” Thiesing said. “I don't think it's safe for the kids to be in school. And I feel like if someone has the opportunity to keep their kids home, they should.”

That’s a point some parents argue, saying schools should have safer protocols in place so all students can return to campus and a more normal way of learning.

RRISD recently started offering free rapid coronavirus testing to students and staff, which is available by appointment only at the Raymond E. Hartfield Performing Arts Center on Tuesdays and Thursdays from 10 a.m. to 6 p.m.

The Department of State Health Services updates its data on coronavirus cases in Texas schools every Friday.

You check how many cases have been reported at your child’s school district or individual school by clicking on this link.

WATCH: These Central Texas school districts have been hit hardest by COVID-19

12,000 doses of Johnson & Johnson vaccine to arrive in Houston as early as Tuesday