Texas child abuse reports are down amid stay-at-home orders, but the threat is still there

People filed 48% fewer reports between the first week and last week of March, according to the Texas Department for Family and Protective Services. 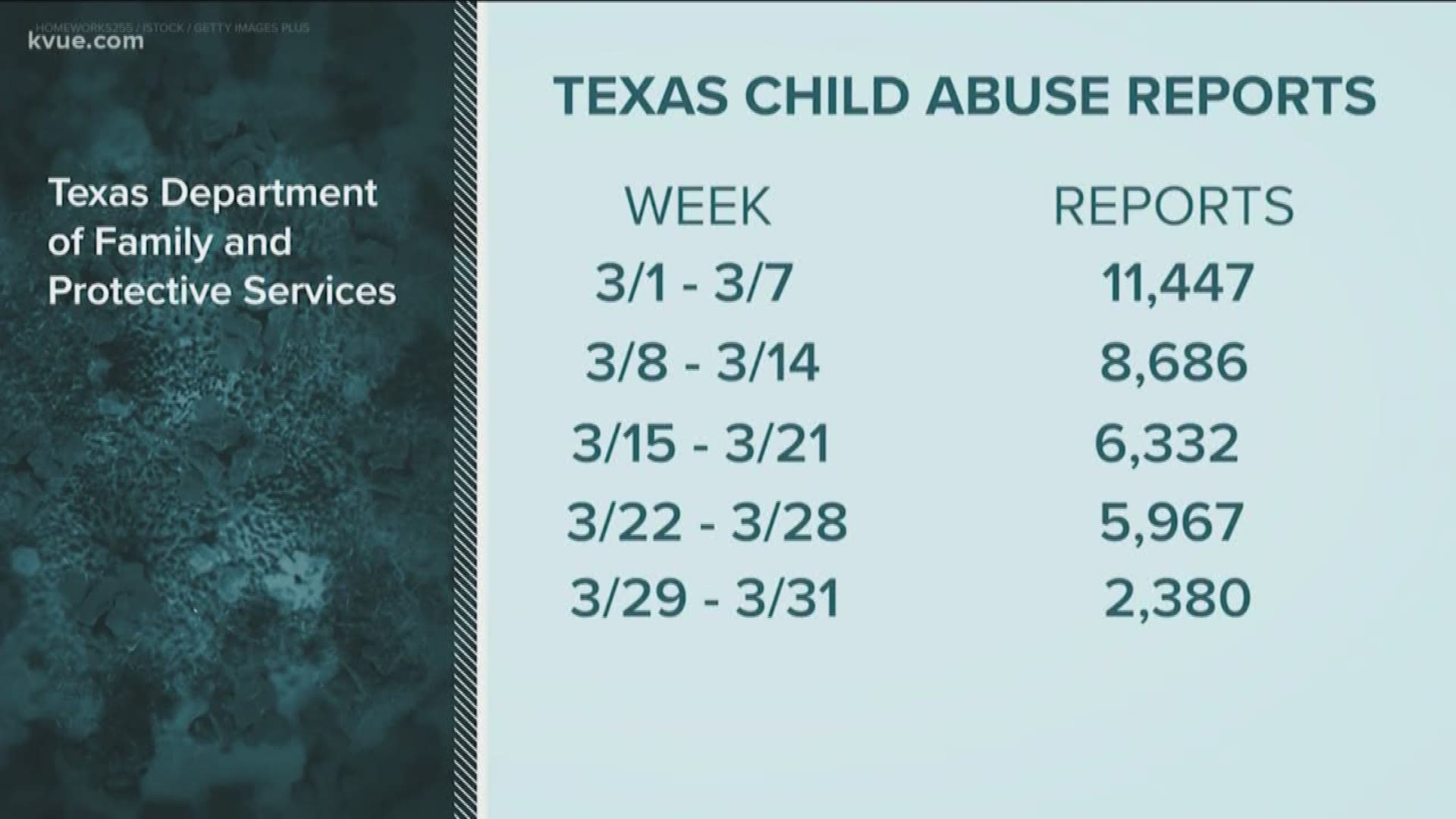 AUSTIN, Texas — With Texas schools closed until at least May, the coronavirus is keeping more kids at home.

Kids in Texas are switching to online learning so they can stay home instead of going to school -- all in an effort to avoid catching or spreading COVID-19.

But new numbers the KVUE Defenders obtained from the state show there could be another threat to our kids’ health and safety.

"These kiddos are possibly in environments that are not safe," Chief Program Officer for the Center for Child Protection Amanda Van Hoozer said. "They may be in environments where the anxiety and the tension is high."

RELATED: More children may enter foster care system due to COVID-19, according to CASA of Travis County

Van Hoozer is worried about child abuse in the state of Texas.

In the first week of March this year, the Texas Department of Family and Protective Services recorded more than 11,000 child abuse reports. The number of reports went down by more than a thousand every week.

In the last full week in March, less than 6,000 reports were made. That’s about a 48% drop from the beginning of the month to the end.

"If children are at home and they don’t have as many pairs of eyes on them, and we know this is a particularly stressful time, then it could put children who are already at risk at higher risk of abuse and neglect," DFPS spokesperson Marissa Gonzales said.

Gonzales said abuse reports usually go down when kids aren’t in school. That’s because a lot of those reports are made by professionals, like teachers and other school staff.

"As we see our work-from-home and stay-at-home restrictions stretch out, we may see those numbers fluctuate a little more," Gonzales said.

Van Hoozer said her advocacy group is worried the drop in abuse reports will only get worse.

"Households are much more stressful. And so what you’re anticipating then is a higher incidence of child abuse but a lower incidence of reporting," Van Hoozer said.

DFPS also records a drop in the number of abuse reports when comparing March of last year to March of this year.

You can still watch for and report child abuse while you’re making essential trips or you're spending time around family. DFPS offers several resources and educational tools to help you identify and report signs of abuse. You can find similar resources on the Center for Child Protection's website.