Hundreds of people in Texas report outages among major internet and cellular providers, according to the website downdetector.com. 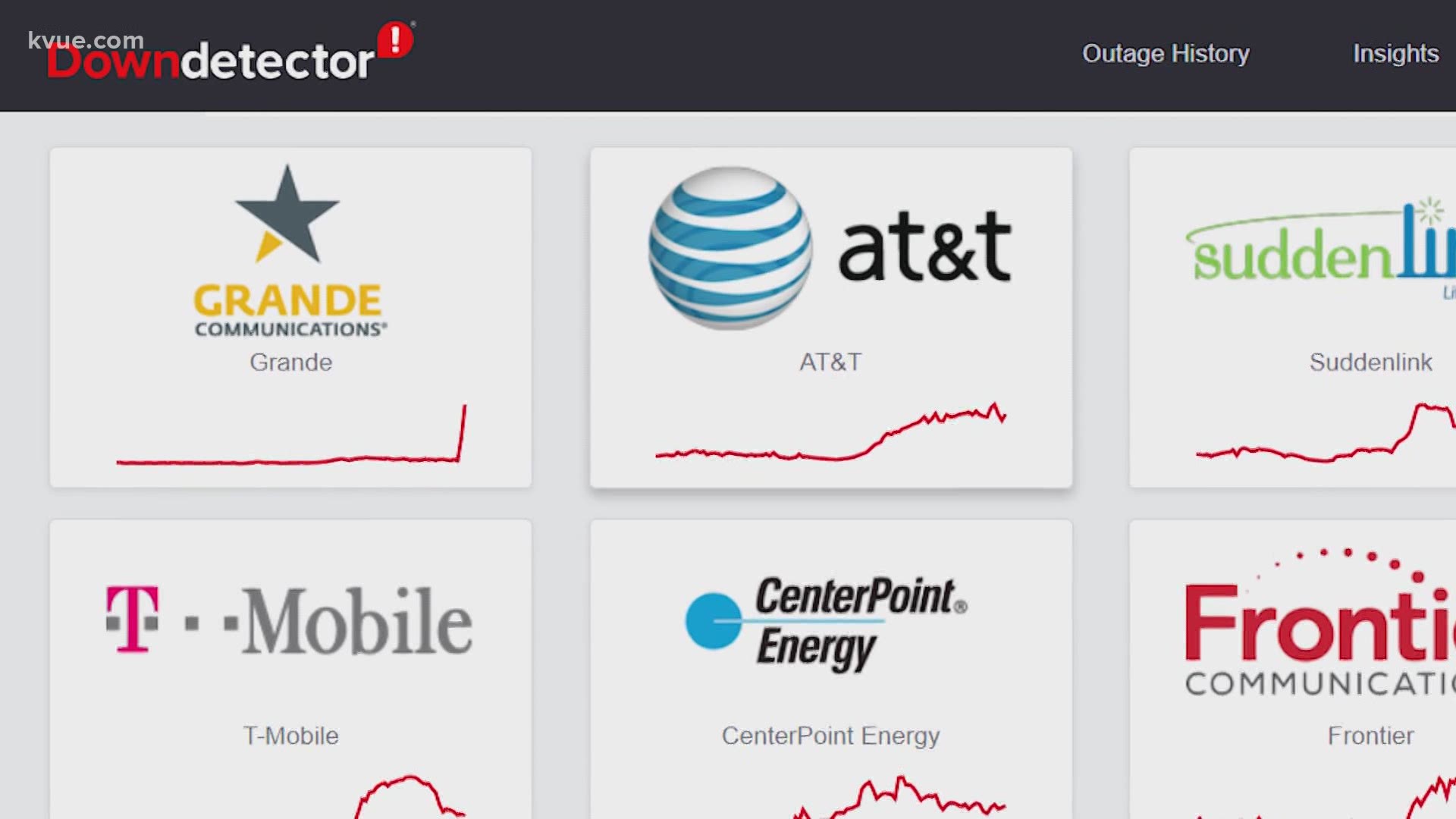 AUSTIN, Texas — The KVUE Defenders have received several reports of people in the Austin area complaining they have no cell service or their internet is down.

Providers we’ve heard from tell us they’re aware of the problems people are seeing and they’re working quickly to fix them.

But until that happens, the KVUE Defenders are tracking which networks have seen the worst issues so far.

We’ve been monitoring reports of outages on the website downdetector.com, which tracks outages in service from social media and people self-reporting.

The major providers that have spikes in outage reports include T-Mobile, AT&T, Sprint, Verizon and Spectrum.

T-Mobile had 326 reports earlier on Monday afternoon, AT&T had 65 and Sprint had 41.

Credit: KVUE
Hundreds of Texans reported outages to major internet and cell phone providers during the winter storm on Monday.

There were slightly more reports for Verizon, which had 86. Spectrum had 710 reports at about 7:45 a.m. on Monday morning.

Credit: KVUE
Hundreds of Texans reported outages to major internet and cell phone providers during the winter storm on Monday.

A spokesperson for Verizon provided the following statement regarding the reported outages in Austin:

"Despite widespread power outages throughout Texas, Verizon's network is performing well in the Austin area. Our backup generators and redundant fiber rings for cell sites and switching centers are serving their intended purpose and keeping the vast majority of the network running and customers and first responders connected.

"For the sites that are impacted throughout Austin, including a cluster of sites south of the Colorado river along I-290, our engineers and vendor partners are working quickly to restore service."

Another spokesperson for AT&T offered the following statement for the same issues people have reported:

"We continue to closely monitor Winter Storm Uri. Commercial power outages and damage from snow and ice may be affecting service for some wireless and wireline customers. Technicians are deploying generators as needed, and are working to restore service as quickly and as safely as conditions allow. Our Network Disaster Recovery (NDR) team is on standby and prepared to deploy additional assets if needed."

A tweet from Spectrum earlier Monday said, "Spectrum customers in Texas are experiencing service interruptions related to winter weather causing commercial power outages and downed lines. As conditions allow we will be working to restore services. We apologize and thank you for your patience."

While providers work to fix the issue, several people in the Austin area are still without power right now. Austin Energy officials said those outages could last until Tuesday.

City of Kyle urging residents to suspend water use