A large majority of complaints filed reported possible price gouging by electric utility companies, according to data from the Texas Office of the Attorney General. 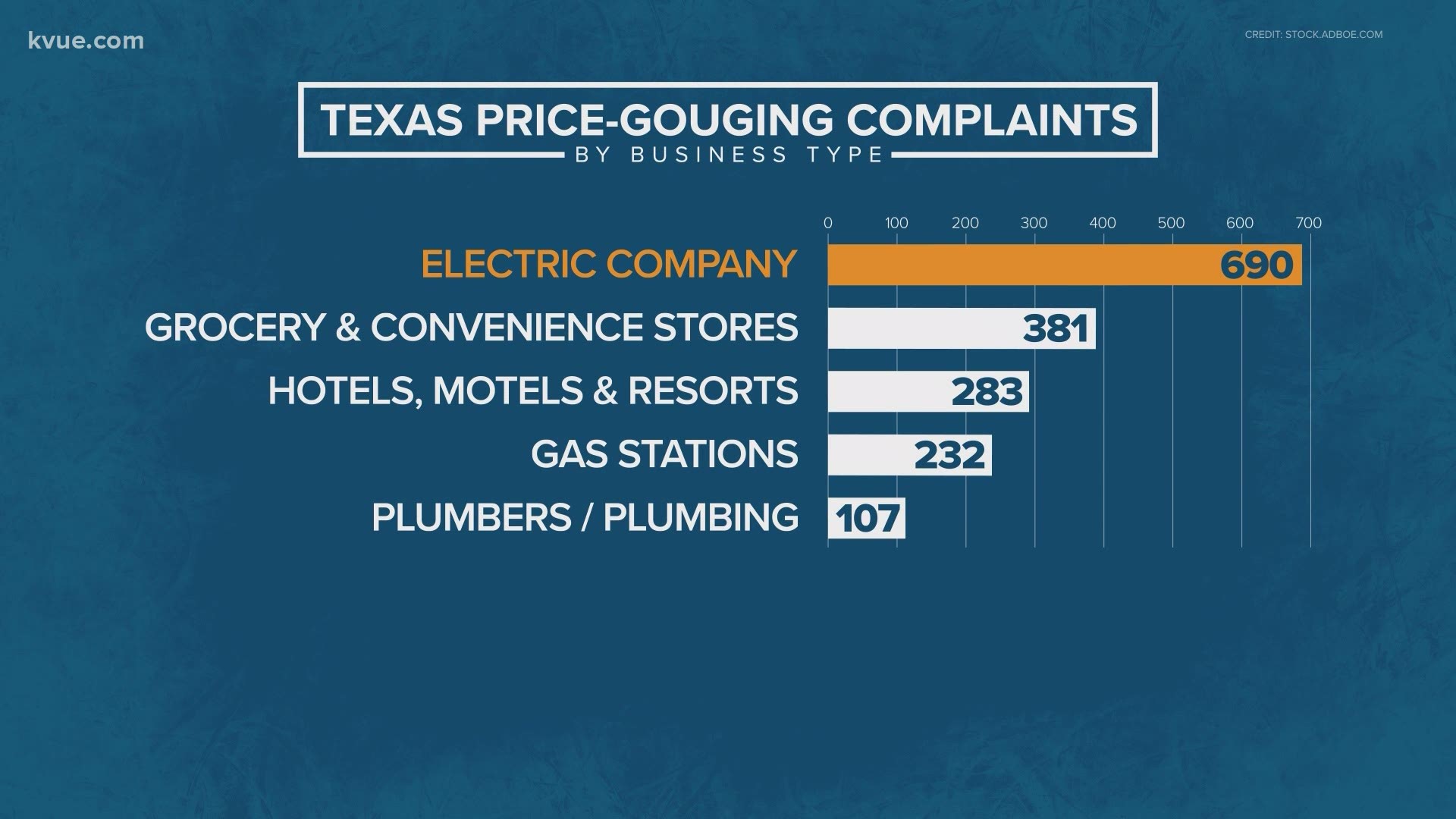 AUSTIN, Texas — Outside her house in Central Austin, Jackie Burniske expects to hear water from her fountain every day. But during February’s winter storm, she heard water outside her house coming from a broken pipe.

“My guest house, which is behind my main house, the pipe broke on the tankless water heater,” Burniske said. “And so the water was spurting out.”

Burniske hired a plumber to fix the leak. She said it took less than an hour and he charged $750. She said it was price gouging.

So, Burniske filed a complaint.

The Texas Attorney General received 1,956 price gouging complaints related to the winter storm. People complained about electric companies the most, followed by grocery and convenience stores, hotels, motels and resorts, gas stations and plumbers and plumbing.

Credit: KVUE
Complaints about electric companies top the list of price gouging complaints during the winter storm in Texas.

People across Texas filed complaints about seeing prices like $20 for a carton of eggs, $9.45 per gallon for gas and even $42 for a pack of 12 water bottles. Shundrayl Allen filed that last complaint.

“I was flabbergasted that someone would have the audacity to charge $42 for just a 12-pack of water,” Allen said.

Allen said she was shocked to see someone taking advantage of people’s needs. She and her father, Ricky Allen, are now hoping for action.

Burniske is also frustrated. She said price gouging doesn’t reflect the true character of Austin or the people in it.

“We are a community here in Austin – we support each other, we take care of each other,” Burniske said. “And so for this plumber to take advantage of us was really upsetting.”

Hear from some of them in my next investigation tonight at 6 on @KVUE. pic.twitter.com/UKBhsedjEm

The attorney general has filed only one lawsuit about price gouging related to the winter storm so far.

The KVUE Defenders asked whether any action will be taken related to the nearly 2,000 complaints. A spokesperson said their office doesn’t comment on possible or pending investigations.

If you want to report possible price gouging, you can do so by clicking on this link.