With limited supplies of masks, gloves and other protective gear, pharmacies that mix and tailor medicine have new guidelines on re-using garb. 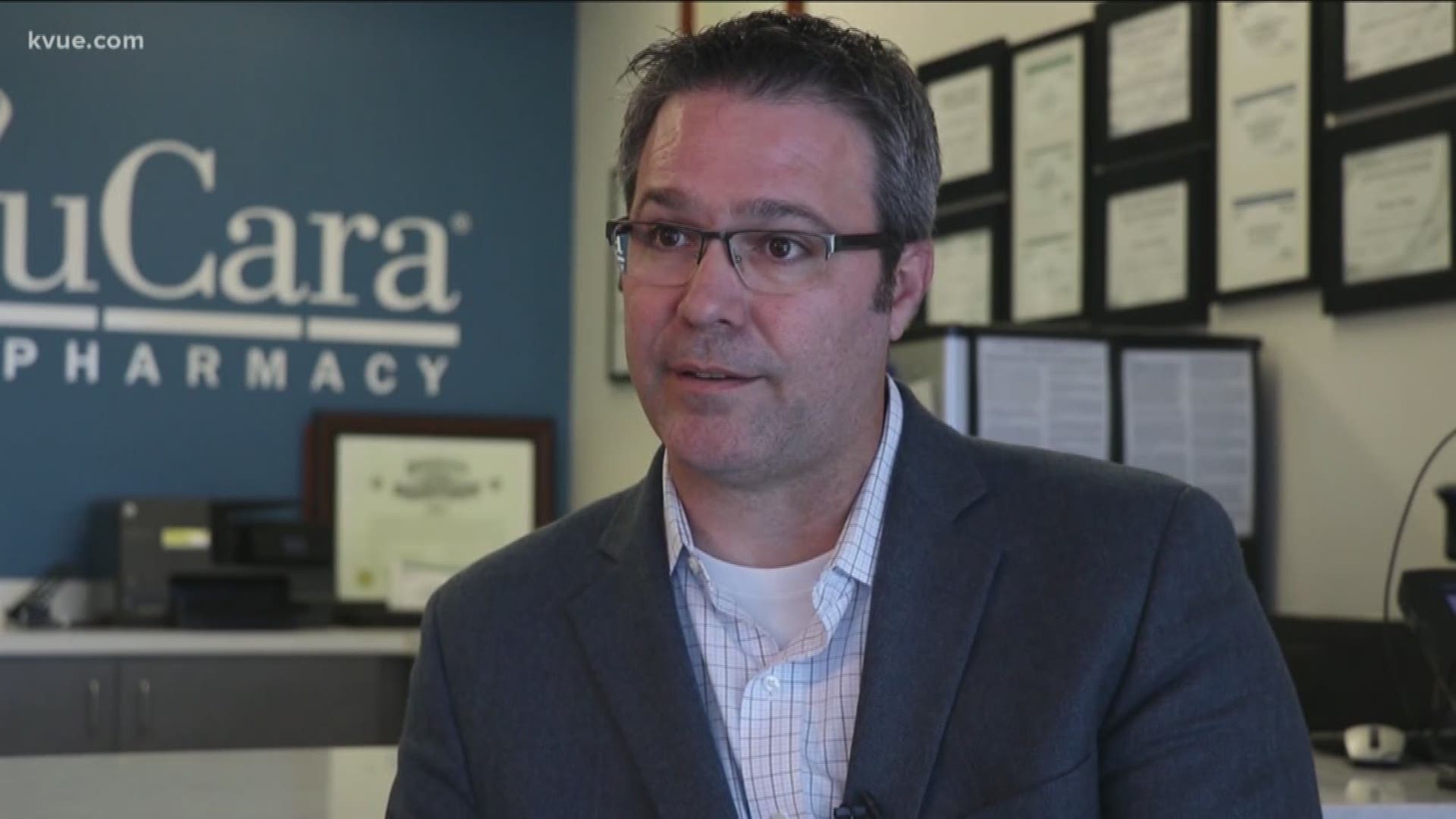 AUSTIN, Texas — “I can't even enter the pharmacy. It's driving me nuts,” said Daniel Dougharty, business development at NuCara Pharmacy.

NuCara Pharmacy is a pharmacy that compounds sterile and non-sterile drugs. Compounded drugs are mixed and tailored in a pharmacy lab. It’s for patients who can’t take a standard manufactured drug.

Sterile compounds go directly into the body, bypassing the digestive system, like injections and eye drops.

The FDA and state of Texas require higher safety standards for sterile compounding pharmacies. All sterile compounds are made in a “clean room” that has its own HVAC system.

“There has to be so many air changes per minute,” said Doherty.

Pressure and temperature are checked each hour. Techs need fresh, clean garments with each new compound.

But many pharmacies are running out of garb.

“[Pharmacies] are experiencing some shortages of the supplies they need in order to do this job … like the masks and gloves,” said Allison Benz, executive director for the Texas State Board of Pharmacy (TSBP).

“We have risk categories for compounding,” said Abby Roth CMQ/OE, director of learning and development at CriticalPoint Center for Training and Research.

“If it's prepared according to the standard by the book – everything that needs to be done – we can put a really long date on it, meaning that the patient, instead of needing to get it immediately, it could sit for two days before the patient gets it. So it gives the pharmacy an ability to be able to ... do anticipatory compounding figuring,” said Roth.

“Some of that really has to do with more about how organisms work and how long it sits. If something gets contaminated with a low level of microorganism like one or two colonies, what ends up happening is that our body can pretty much take care of that. So, if that drug is given to the patient immediately, immediately, their immune system can handle it. Where we get a problem is when it gets contaminated and then the bacteria is able to grow and they're able to exponentially grow over a period of time. And if something sits for a day or two days, it could be grossly contaminated. Then the patient wouldn't be able to handle that from an immune response standpoint,“ said Roth.

The KVUE Defenders exposed how contamination can be life-altering and how the Texas State Board of Pharmacy may take years to investigate a complaint and issue enforcement.

“The people in the pharmacy are taught how to have good aseptic technique, how to properly compound that preparation in order to keep the patient safe. As long as they're following the general standards that are set in the USP 797 document, holding to good aseptic practices, continuing to clean their facility like they need to, this garb shortage should have really relatively small impact on the safety to the patient,” said Roth.

Roth says people often have a misconception about the type of garb pharmacists and techs use.

“What I want the public to know and think about is that what happens in the pharmacy and the garb that we use is different than what happens on the floor and the rest of the hospital. So, when it really comes down to the garb that we're using in the pharmacy, we are using it in order to protect the preparation that we are making. We're not using it to protect ourselves from it from anything unless we're doing hazardous drug compounding,” said Roth.

“Our team actually ordered a few these things before the major outbreak. So, we got lucky,” said Doherty.