How to file harassment complaints at school: Defenders discover it can be difficult

All school districts in our area stand against discrimination, but the way to find their policies and procedures for filing discrimination complaints can improve. 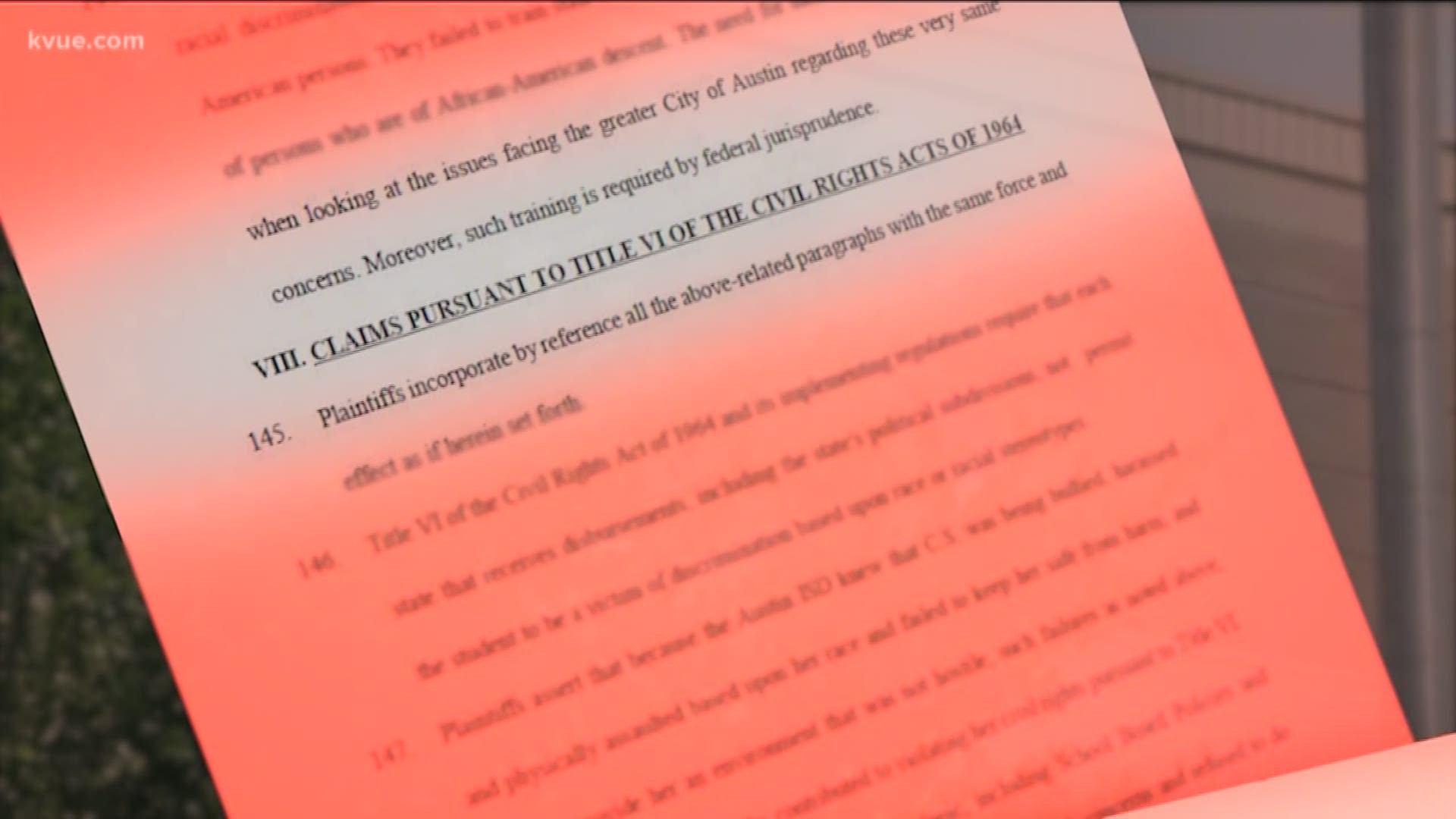 AUSTIN, Texas — When Pamela Parks and Charles Sneed asked for help, they didn’t expect to end up in a federal lawsuit.

The parents of a Bowie High School student said their daughter faced repeated “racially charged” harassment during her freshman and sophomore year.

“I’m a parent. I’ve never had that happen before,” said Parks.

Parks said the school district didn’t do enough to stop it, so they sued, claiming the district discriminated against her daughter “because she was an African American female.”

“Every day of my life I devote to try to make sure she is OK, for as long as I can,” said Parks.

In the suit, the family alleged civil rights violations as well as unconstitutional policies, procedures, practices and customs.

Records show the teen was called “sasquatch,” ridiculed for her hair, had her farm equipment vandalized and her animals injured.

“We just did not understand why that would take place,” said Parks.

The complaint lists several district employees who were notified.

In a motion to dismiss the lawsuit, Austin ISD claims the family didn’t complain to the right people, stating, “Nowhere in her complaint does she allege specific actions by the District’s Board, or even individual Board members."

According to AISD Policy, Board members may only consider a case through the appeal process.

Appeals start with a written, filed complaint – one that Parks said she couldn’t find.

“I said, ‘What’s the next step? What do I need to do legally? What’s the process for AISD?’ I was trying to google it on their website,” said Parks.

The homepage for AISD does not have a link to a complaint form. The tabs won’t help.

If you search “complaints,” scroll past the “policies and research” link on the first page of responses. The link is solely for discrimination allegations against police.

Click through to page three. The link “policies and research” takes you to a page with several links titled “FFH.” Those FFH codes point to the discrimination policies and forms.

“What we want to make sure is that our administrative staff and that our office staff knows where to find those forms,” said Dr. Jacob Reach, AISD chief of staff for the superintendent’s office.

“Our non-discrimination policy is on the front page of our website, and explains who to reach out to,” said Reach.

The policy leads to the anti-harassment statement. The statement names the point of contact, but it doesn’t show how to file a form or how the complaint process works.

“We want to make sure staff can direct parents to the appropriate policy and form for their individual situation,” said Reach.

This isn’t unique to AISD.

The KVUE Defenders dug through several district websites. AISD was the only district that posted a discrimination-specific student complaint form.

All other school districts pointed to a general complaint form, which may follow a different process unless properly directed to the designated coordinator.

A judge dismissed Parks' and Sneed’s unconstitutional policies, procedures, practices and customs claim against AISD. The civil rights portion of the case was sent to another court for review.

If you need to file a discrimination complaint, ask for the “designated coordinator.”

The KVUE Defenders reached out to several school districts for comment.

"Leander ISD does not tolerate discrimination of any kind on our campuses. As our partners in making the district a welcoming, inclusive place to learn and grow, we want our students and families to know that they have multiple means of contacting us if they experience or witness discrimination.

Verbal reports can be made by any student to any LISD staff member, who will follow established protocols to investigate and involve other district personnel if needed. Written reports may be submitted to their campus administration and forms can be found on our website (here). In addition to the verbal and paper form, we also have something called Anonymous Alerts where they can share information about an incident and it will be reviewed by the appropriate office. The link to the Anonymous Alerts is on the footer of every webpage we have and can also be found on our Quick Links under 'I am a…'."

“The District may request, but shall not require, a written report. If a report is made orally, the District official shall reduce the report to written form.

Employee Report—Any District employee who suspects or receives notice that a student or group of students has or may have experienced prohibited conduct shall immediately notify the appropriate District official listed in this policy and take any other steps required by this policy.

We do have universal complaint forms on our web under our grievance page if they wish to use a form. Here are the links to the grievance forms:

If someone makes an oral complaint to the district, the administrator would take the information and write it up in a report format and then make the necessary notifications. They may also have the person write and submit a statement they could attach to it. Depending on the nature and urgency of the complaint, whether student(s) are in immediate danger, or whether a potential criminal act has occurred, the information would be immediately shared with law enforcement, CPS, and other authorities."

"The Board of Trustees for the Pflugerville Independent School District has adopted specific grievance procedures for employees, parents, and community members to follow when they are not able to resolve disagreements.

The Board encourages employees, parents, and community members to discuss their concerns and complaints through informal conferences with the appropriate teacher, principal, or appropriate administrator. Concerns should be expressed as soon as possible to allow early resolution at the lowest possible administrative level. Informal resolution is encouraged but does not extend any deadlines in the formal grievance policies.

The District's Formal grievance process is described in the grievances policies: DGBA (LOCAL), FNG (LOCAL), and GF (LOCAL). Formal grievances by student, parents, or the community members should be submitted to the Coordinator of Student Affairs.

Did not respond to our inquiry.

Here are links to policies for other districts:

Austin ISD to vote on school closures at Monday meeting