Now, the State is sending 2,500 nurses throughout the state to bolster critical staffing levels. 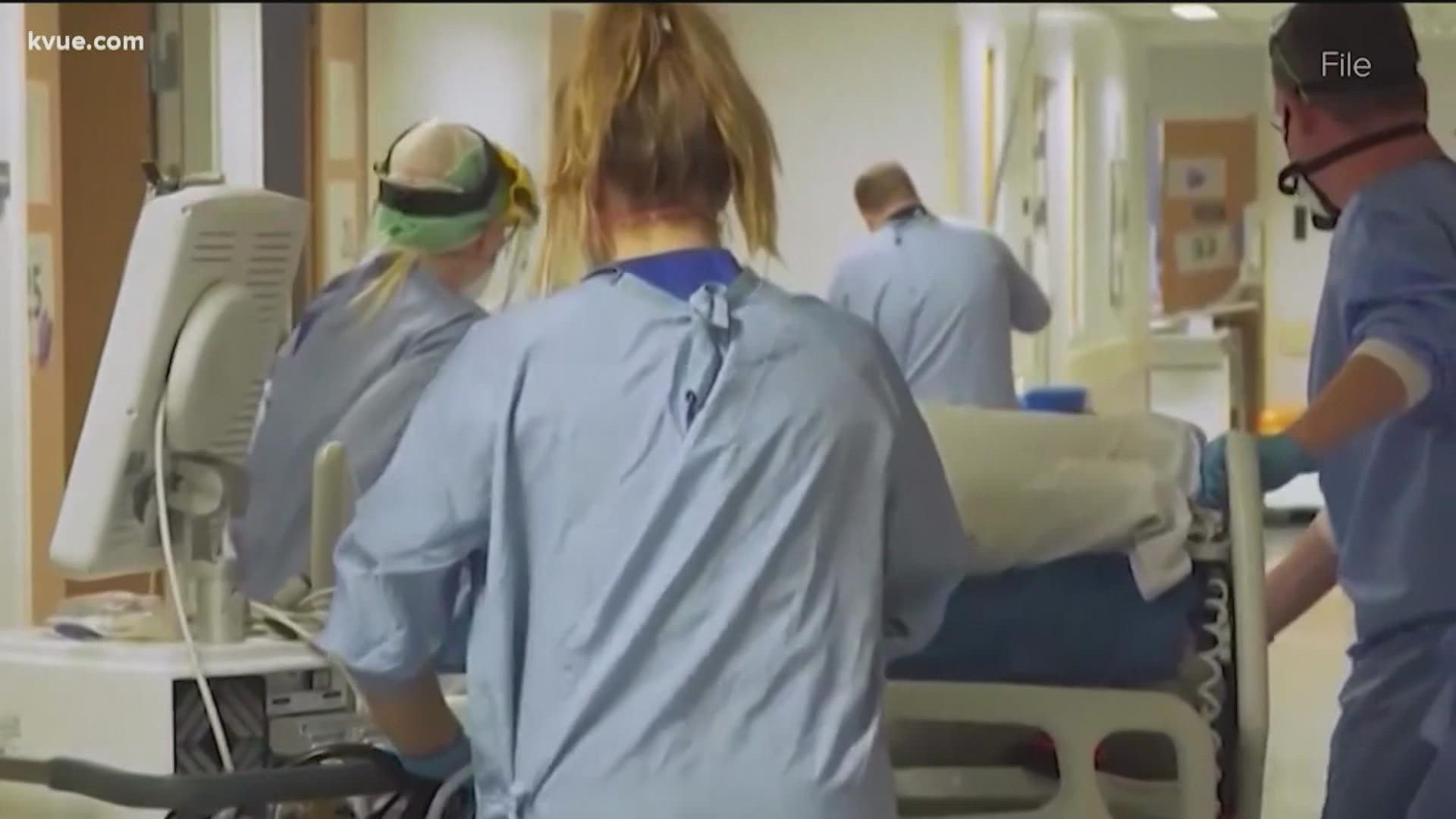 AUSTIN, Texas — Editor's note: The video above was published on Aug. 8.

More than a month after a summer COVID-19 surge began inundating Texas hospitals, Gov. Greg Abbott announced this week that the State is sending 2,500 nurses throughout the state to bolster critical staffing levels.

But his action comes weeks after State leaders rejected requests from hospitals, including those in Austin, to urgently send more staff as patients began filling COVID-19 wards and ICU beds.

The State's decision of whether to help supply nurses has gone back and forth in recent months. And the KVUE Defenders learned the question of who will pay for the nurses is at the heart of the debate.

The issue comes as Austin and the state have seen among its worst weeks since the pandemic started in March 2020. An 11-county area that includes Austin dropped to only two available ICU beds this week, the lowest since the summer surge started. And Texas was averaging at least 10,000 new COVID-19 patients per day for the past week.

At the worst of the COVID-19 pandemic in February, Texas officials dispatched more than 14,000 nurses to hospitals across the state, and hundreds came to the Austin area.

In May, the KVUE Defenders showed the State spent more than $4 billion on emergency medical staffing without seeking competitive bids.

But by July, when a summer surge from the delta variant started infecting thousands, the State had begun rejecting requests for that same help.

In a July 29 letter from the chief of the Texas Division of Emergency Management, he told local leaders that State officials wanted them to instead use federal Coronavirus Local Fiscal Recovery Funds, billions of which went directly to counties and cities across the state.

"We have money," Chief Nim Kidd told the Senate Health and Human Services Committee on Tuesday, adding that the State had spent more than $5 billion in staffing nurses for local hospitals and other facilities in the past year.

Kidd said part of the problem is local governments haven't tapped into the available federal money to hire their own nurses.

Why does the Austin area need more State-funded nurses?

But finding nurses has been easier said than done, healthcare officials told the KVUE Defenders.

That's why state Sen. Sarah Eckhardt, a Democrat from Austin, says she began lobbying the State to restore what it had been doing when local officials recently asked for her help.

"I've seen the State really dismantle what it built reluctantly during the first two surges rather than improve upon the model so that we would be better prepared for this next one," she said.

Austin Public Health officials say a lack of staffing has kept them from re-opening the Austin Convention Center as a makeshift hospital, as they had done months ago.

At the February height of the pandemic, a large area that includes Austin, Waco and Bryan-College Station had up to 800 State-supplied nurses.

The Texas Department of State Health Services says that same area asked in July for slightly less, and was told no.

"I can't think of a part of the state that we haven't had a call or request for nurses from," Kidd told the senate committee.

Austin's three major hospital networks released a statement to the KVUE Defenders, saying that they are doing what they can to find and keep nurses and welcome any additional help the State can give.

Nurses now on the way to Texas cities

By mid-week, officials said more nurses were on the way across the state.

Kidd said in that same meeting Tuesday that he had just received orders from Gov. Abbott to again put a similar nurse-supply program back in place – weeks, though, after the start of the summer surge that has inundated hospitals.

"The governor made it clear to me yesterday, the intent is to go out there and help the healthcare system and get it shored back up," he said.

And by Wednesday, Abbott issued a news release, saying he will deploy 2,500 – mostly from outside the state.

In a news release from the Texas Department of Health Services, officials said cities such as Austin that recently had requests denied should apply again. But it added that they should be "judicious."

Officials said that Abbott has agreed to pay for the nurses through next month, but that extended deployments may require that local governments and facilities split the cost.

A spokesman for the Department of State Health Services told the Defenders that the Austin area is expected to get about 300 nurses in the coming days.