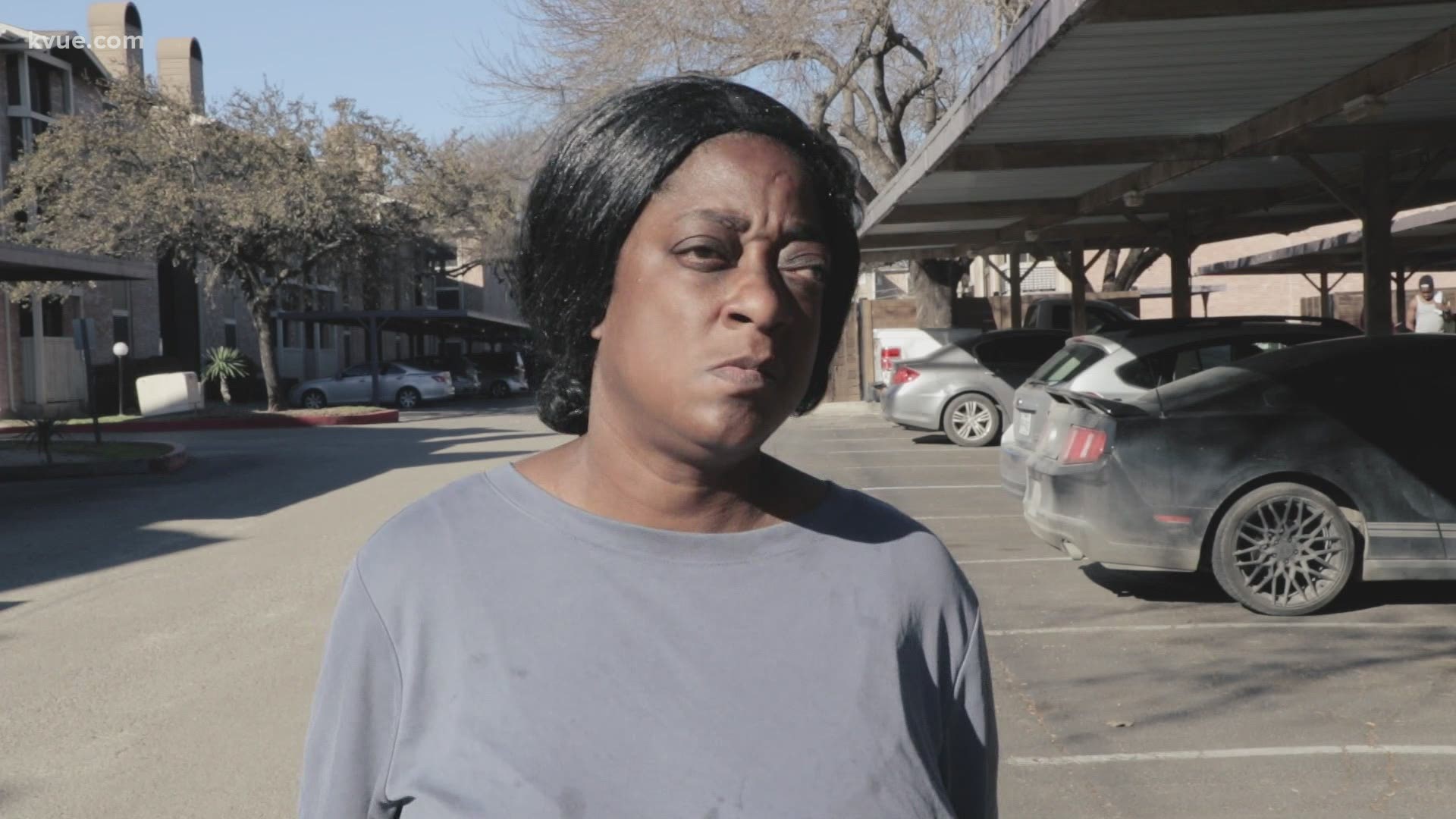 In an apartment complex with hundreds of neighbors, it didn’t take much to feel alone.

“I'm glad you came out because I looked for something online to see if somebody could help me. I need my story heard,” Rose Tealer, a Mueller Flats Apartments resident, told KVUE on March 10.

It didn't take much to feel exposed.

“I’d been showering in the pool,” Tealer said.

It didn't take much to feel stripped of dignity.

“Cold water – I had to take my soap and my towel. It’s not right. It’s so embarrassing. I had my clothes on, but still. The water was cold. When I got in there, my legs went numb,” Tealer said.

Tealer was out of water following the February winter storms. Water started to flow by March 10, but she said it was cold.

“We had no water whatsoever,” Jackie Mann, a Mueller Flats Apartments resident, said.

Mann called the KVUE Defenders when the storms’ impact lasted weeks at the complex.

“They've opened a fire hydrant across the street. You go get water there. I don't know how that's manageable for anyone,” Mann said.

Mann showed us the messages from her complex. The messages said showers were available at the next-door hotel. However, the 30-minute windows were full until at least May 9.

“You got to go online, but it was filled up for three months,” Tealer said.

Tealer said clothes could be washed at the complex’s laundromat.

“You have to have a special card with money on there. I don't have the money,” Tealer said.

Tealer is on a fixed income. She said she gets a little more than $700 a month in disability insurance. It and the other government assistance barely covers her rent, utilities and food.

All complexes must be kept up to city codes. Those codes include hot, running water.

“However, I will say there are other buildings or other structures in that area, built relatively at the same time, that perhaps didn't have the same issues,” Armstrong said.

If an apartment owner does not fix damages, the City can force fines or shut a place down.

“What I can tell you is that we strive for voluntary compliance … We really want to spend more on education than we do enforcement. Enforcement is a tool. It's a last-resort tool,” Armstrong said.

Mueller Flats carries a history of complaints. The KVUE Defenders found 27 complaints from Jan. 1, 2018, to Jan. 1, 2021. Of those complaints, seven violations ended in compliance. Half of them show “no violation(s) found/inspection performed.”

“A lot of people don't even use code. They don't even know that that's something that they can do when they're in these situations,” Garcia said.

Garcia said those “no violations found” can happen if the person who made the report doesn’t let the inspector in to see the damage. Armstrong said an inspector will try three times at various times in the day. Because of the pandemic, inspectors offered virtual inspections using a video call with complainants.

“If there's no way to validate the complaint after a third attempt, that would be closed,” Armstrong said.

Landhart is engaged to Tealer’s son. They opened their South Austin home to Tealer until their apartment also lost water.

“Unfortunately, we were in the same predicament,” Landhart said.

During our interview with Landhart, a man identified himself as the manager for Mueller Flats Apartments. He told us to leave the complex property and said he would call Austin police.

The complex manager would not talk with us. We noticed he was on the phone, ignoring our attempts to get his attention. He refused to answer any questions. He refused to say when issues would be fixed. He refused accountability. We left the property as asked.

The complex manager made good on his threat. Police met us in front of the complex and told us to stay on the sidewalk. We did, but data shows problems remain.

Heading into April, City records show inspectors have at least 118 open cases at the location.

“These people need to be held accountable,” Tealer said.

For three weeks, the KVUE Defenders tried talking with Mueller Flats. We reached out in-person, by phone and through email. They refused to respond.

“The property has qualified for ROP [Repeat Offender Program] and has been mailed a registration letter. They will have 10 days to appeal. The property has not been suspended. Management is allowed to rent out vacant units,” an Austin Code spokesperson said March 30.

As of March 31, Tealer said she still needs repairs so she can wash clothes and cook meals.