Marble Falls recycles treated wastewater instead of dumping into river

After years of drought and growth, Marble Falls needed to do something to help the increasing wastewater demands. The city's recycling plan saves money and more. 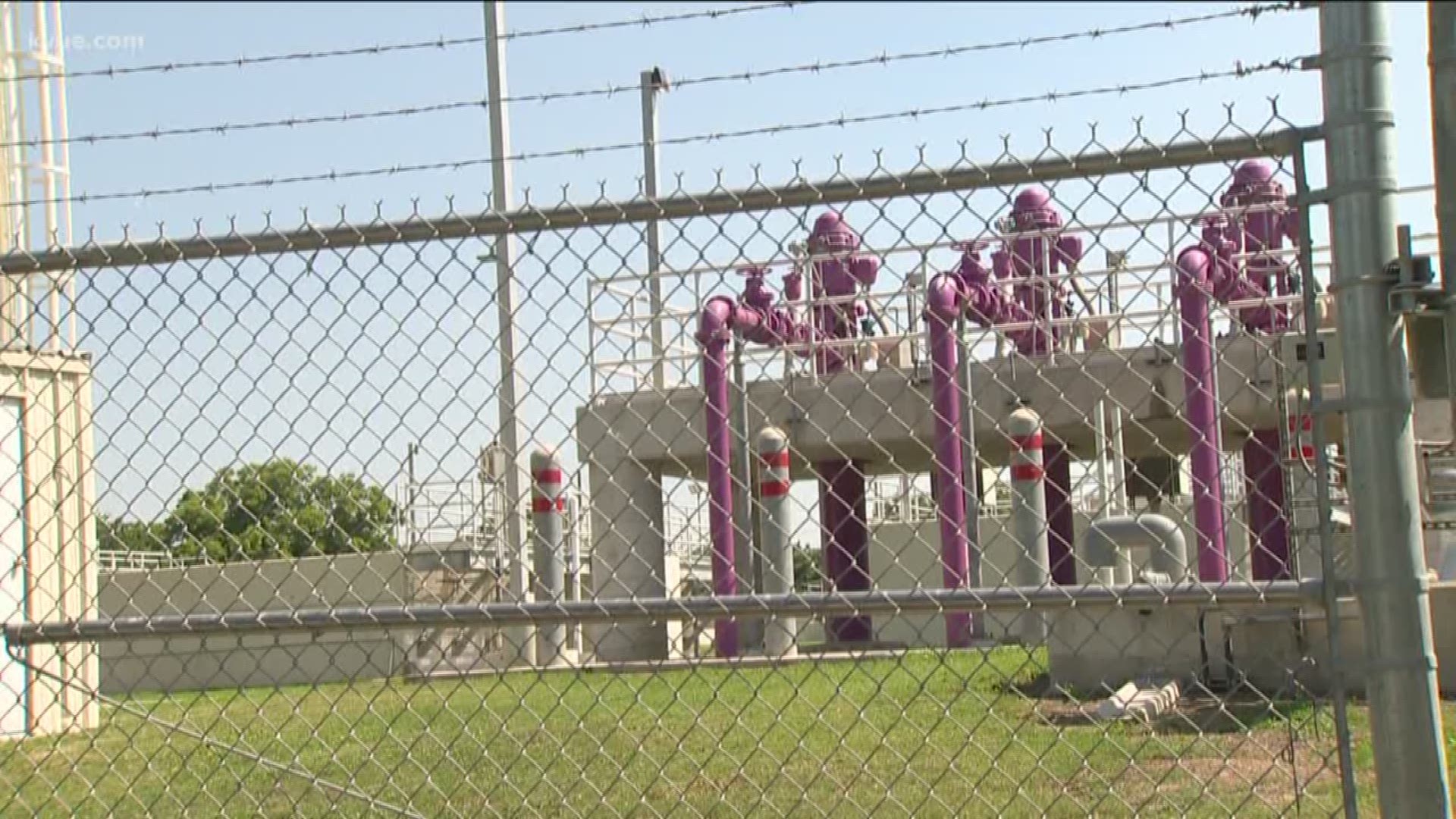 MARBLE FALLS, Texas — A growing number of cities are dumping treated wastewater into the very places we enjoy and even get our drinking water.

The state allows it. But there are cities choosing different ways and it is saving the environment, even making them money.

At Hidden Falls Golf Course in Meadowlakes lies a solution to booming growth. And it all starts with a guzzler.

To get the golf course in Marble Falls to look this green requires a lot of water.

“It takes 400,000 gallons to half a million gallons every night,” said Trini Solorzano, Hidden Falls superintendent.

For years, golf courses like this have relied on city water, but Solorzano said this course does something different.

“We use Marble Falls and Meadowlakes recycling water,” he said.

It's a recycling effort that began nearly 10 years ago in Marble Falls. A water-saving solution brought on by years of drought and growth.

Credit: KVUE
Marble Falls built a purple pipe system which recycles treated wastewater after years of drought and growth. It has helped the city save water and now they have a few paying customers.

Instead of dumping the wastewater into Lake Marble Falls or building another wastewater treatment plant, city leaders decided to reuse treated wastewater.

“We use it to irrigate the park system here in Marble Falls,” he said.

“It's one of the reasons I moved here and started working for the City is the things we're doing to take care of the environment out here. It's a great community right here on the lake. We enjoy having that available to us, but we also see it as a responsibility that we've got to take care of it,” he said.

The EPA has touted recycling water programs and the increasing need to develop programs like this.

Credit: KVUE
Marble Falls has recycled treated wastewater since 2011, using it in the sprinkler system of city parks, saving the city 15 million gallons of water a year.

A difference that's getting noticed.

“The wastewater, where are you going to put it? You might as well recycle it. And the golf course needs water, so it's a perfect solution,” said golfer Dave Herfel.

It's a solution thousands of cities are not choosing. The KVUE Defenders uncovered that 2,583 wastewater treatment plants across the state have permission to dump treated wastewater into our waterways – where we swim, fish and get our water.

And a growing number of cities are seeking similar permits.

The EPA tells the Defenders those permits "will generally specify an acceptable level of a pollutant" like fecal coliform, ammonia and nitrates.

Hundreds of Brushy Creek fish killed after over 100,000 gallons of sewage leaks from wastewater plant

Wastewater treatment plants cannot remove antibiotics or filter out household chemicals and other contaminants that flow into storm sewers.

The big concern in Central Texas is that many rivers have rocky bottoms and, depending on the season, have low or no water flowing in them.

Credit: KVUE
This is a picture from DroneVUE showing the algae growth at the point where the Liberty Hill Water Treatment plant has permission to dump treated wastewater into the South San Gabriel River.

The Liberty Hill Water treatment plant has been cited for dozens of violations since 2017.

Texas has the only direct potable reuse facility in country

Texas has the first and only direct potable reuse facility in the nation. It reclaims and cleans previously used water for municipal use.

The EPA said, "Texas and California have developed the most robust criteria and regulatory/permitting approaches to date. In Texas, the Texas Commission on Environmental Quality (TCEQ) oversees all aspects of planning, permitting, and monitoring to protect the state’s water resources. Faced with an urgent need for additional water supplies in parts of the state, TCEQ has approved direct potable reuse (DPR) projects on a case-by-case basis in accordance with the innovative/alternative treatment clause in the Texas Administrative Code addressing public drinking water that allows 'any treatment process that does not have specific design requirements' to be considered for permitting. Although this approach allows for flexibility for considering water projects, TCEQ requires that significant pilot testing be completed before a project can achieve final approval. The Colorado River Municipal Water District’s Big Spring facility, the only currently operating municipal DPR facility in the U.S., was permitted under this approach and has been operational since 2013.”

Municipal needs such as residential water use currently account for about 27% of Texas’ water demand, but that share is expected to grow dramatically over the coming decades as the population increases.

Currently, the drought monitor shows that 98,000 Texas residents are in a drought.

And the EPA also estimates that based on daily per capita water availability, "10 urban areas in Texas are at medium or high vulnerability to water shortages, including San Antonio, El Paso, Dallas and Austin."

Choosing to reuse water is not cheap. The city of Marble Falls invested about $800,000 in its purple pipe system – with the LCRA contributing a portion of that.

Credit: KVUE
This is one of the purple pipe sprinkler heads at Johnson Park in Marble Falls indicating the water coming from these sprinklers is recycled treated wastewater.

“Down the line, making an investment in this type of system will pay for itself,” said Hodge. “We've got two or three paying customers.”

There's also a lot more interest, including from the local school district. So, for an area struggling to keep up with the demands of growth, Marble Falls sees this as a winning solution. The city continues to add more pipes and more paying customers. A win-win with its share of green.

Marble Falls isn't the only place doing this. Lakeway does too.

So does Belterra, a community between Austin and Dripping Springs. It's an effort that resulted from a four-year fight when the development initially wanted to dump treated wastewater into nearby Bear Creek, which recharges the Edwards Aquifer and Barton Springs.

And Austin takes yard trimmings collected curbside and some of the city's treated sewage sludge to create Dillo Dirt, which is sold in many area stores and used in some area parks.

For a map of wastewater discharges across Central Texas, see below:

You can search by county for where wastewater discharges are by clicking here.

Find more information about drought and the water outlook for Texas here.