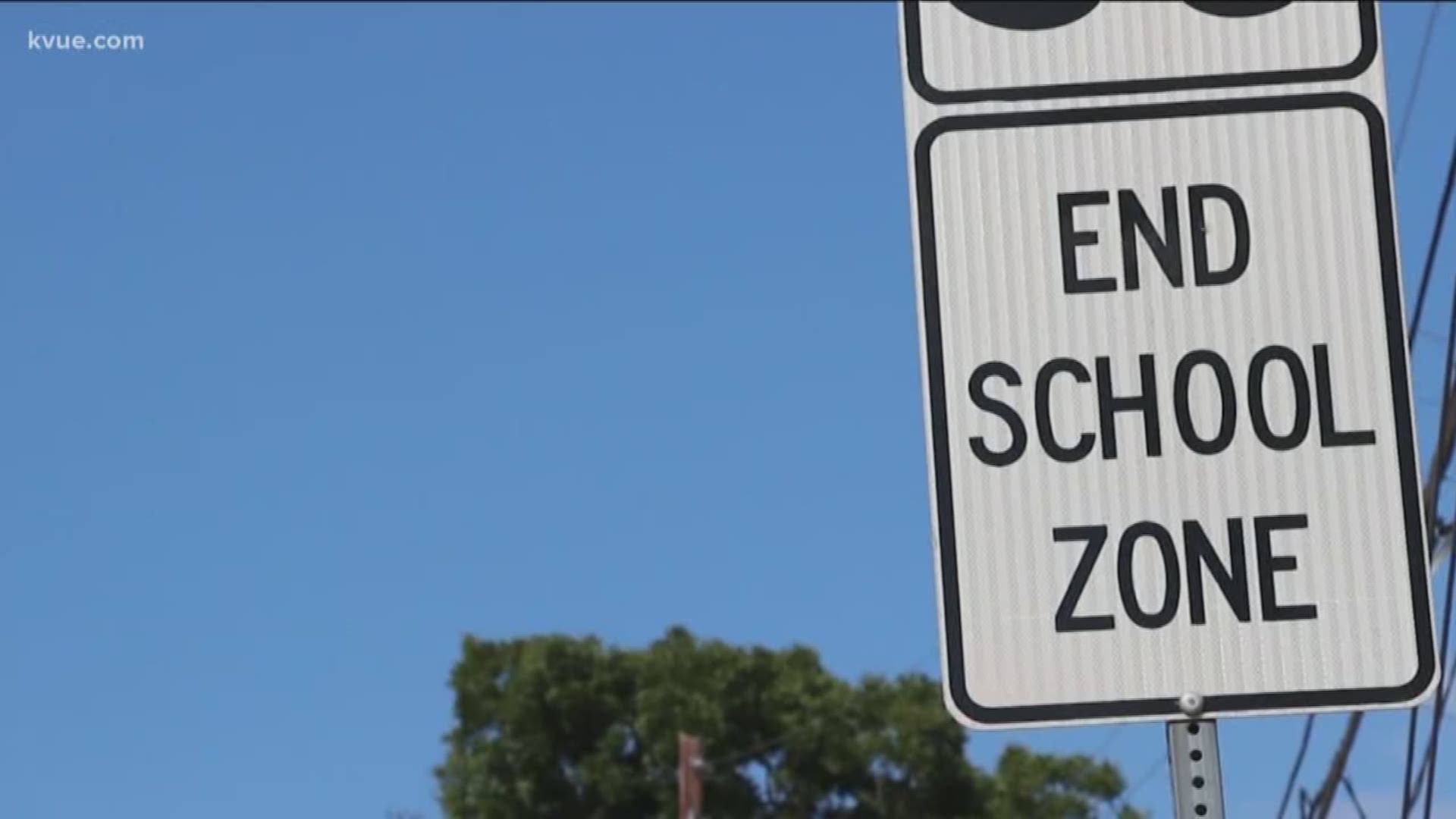 AUSTIN, Texas — Heather Cavazos lives about a block away from Oak Springs Elementary School. Two of her kids walk to school there every day.

Cavazos is worried about safety around the school because those streets have been in the news before.

Cavazos said you could hear that 2018 crash from her house.

“We heard a loud boom, and we thought it was a gunshot,” Cavazos said. “But when we came outside, it was a 14-year-old who got hit on a skateboard.”

That history of traffic accidents near Cavazos’ home is why she’s worried about what the KVUE Defenders have uncovered.

Oak Springs Elementary is just one school that falls on that list.

The school zone sign on Webberville Road ends several feet before a crosswalk kids use on the corner of the school. And on Oak Springs Drive, the school zone stops before the track and a white line in the street, which makes it legal for kids to cross.

But Goodwin Avenue, which has a parking lot next to the school’s playground, has no school zone signs telling drivers to slow down.

That’s the same street where Defenders saw dozens of parents and kids crossing every day.

“I mean, the school zone should end after the school,” Cavazos said. “You know, it should cover the whole school.”

A lot of AISD schools have yellow signs before crosswalks, noting people could be crossing there. But those signs don’t say “school zone” or note a lower speed limit.

“I have to say this, I am surprised that so many schools are not having school zones designated very close to their property lines,” said Chandra Bhat, a civil, architectural and environmental engineering professor at UT Austin.

School zones usually designate slower speeds, and most studies show even a 10 mph difference in speed can save a kid hit by a car.

“We need to make sure that anything we put out there is a focused crossing, it’s active, it’s respected by everybody on the street,” said Eric Bollich, the acting assistant director of Austin Transportation.

The Federal Highway Administration recommends school zones start before a crosswalk or a school’s property line, whichever comes first. But Austin officials said they set school zones largely based on distance from certain crosswalks at the school.

“Can you tell me what the City’s hesitation would be to just extend the school zone a little bit further?” Defenders Reporter Brad Streicher asked.

But the latest study on school zone speeds from the Texas Transportation Institute shows Texas police officers don’t feel the same way. Of the officers interviewed in the report, 77% said most of the time, drivers comply with lower speed limits in school zones.

And UT Transportation Engineer Kara Kockelman said fear of noncompliance is not a good reason to keep school zones short.

“Yeah, it seems strange to only set laws that you know will be complied with,” Kockelman said. “You really want to set them based on safety in this case and notifying drivers to vulnerable populations is always a good thing, regardless.”

Kockelman said the gaps in school zone signs that the Defenders identified could be a big safety concern for parents and kids.

“It’s not hard to put paint on the ground that says, ‘school ahead’ or use speed humps on those cross-streets that may not get a lot of traffic,” Kockelman said. “But we still need to make sure people are bringing their speeds down.”

The City is thinking of making changes like that to Gullett Elementary School in North Austin. The Defenders reported school zone gaps at that school back in September.

A few weeks after our report, the City started looking into adding a crosswalk and extending the school zone.

“You would think maybe, intuitively, 'Let’s have a school zone for long-distance and let’s capture the maximum safety.' But, unfortunately, I think it’s human nature that people naturally start to speed up after a certain distance,” Bollich said.

But some UT transportation engineers think extending school zones is worth considering.

“Absolutely,” Bhat said. “I think it’s something that should be explored."

And parents like Cavazos also said they would like to see school zones that at least cover the perimeter of their kids’ schools.

“It will alert them, you know,” Cavazos said. “They’ll see that and they’ll say, ‘Hey.’ But if they don’t see it then they’re not going to know. But once they see it, then their mind clicks to it, and then they’ll know – 'School zone, oh hey, let me slow down.'"

Austin Transportation officials said they do respond to complaints or concerns about school zones and other transportation-related issues. You can send those concerns through the City’s 311 system.