Hundreds of guns found in Texas airports in 2019

AUSTIN, Texas — The signs at the airport give a scary warning: Bring a gun through the security checkpoint and risk a $13,000 fine, or maybe even jail time.

"I don’t understand why people would do that," Austin airport traveler Alison Kogan said. "Who would bring a gun to an airport? It’s shocking to me and it’s very scary."

Kogan said flying without a gun seems like common sense. But, apparently, not here in Texas.

“Well, here at Austin, last year we found 93 firearms throughout all our checkpoints," Austin TSA officer Nick Hall said. "So it just depends on the day, what we find.”

Austin made TSA's top 10 list of airports with the most gun discoveries in three of the last five years.
KVUE

But last year, in 2019, that number dropped back down to 78 guns in Austin’s airport.

Austin Bergstrom-International Airport (AUS) made TSA’s list of the top 10 airports where officers found the most guns at security lines in 2015, 2016 and 2018.

"Well, I think overall, anybody bringing a weapon through the checkpoint ... is concerning," Austin Police Department Lieutenant Stephen Fleming said.

Lt. Fleming handles airport operations. He steps in when TSA finds a gun in someone’s bag.

Even though Austin’s airport gets busier every year, he said fewer gun discoveries doesn’t mean TSA is missing guns going through security.

"I don’t think it has anything to do with less screening or there are some getting by," Flemming said. "We have a very active and very proactive screening process."

If you look at the top 10 for last year, Austin didn’t make the list – but three other airports in Texas did.

Three Texas airports made the TSA's list of the top 10 airports where the most guns were found in 2019.
KVUE

In total, TSA found 789 guns in Texas security lines last year, which is about 18% of 4,432 guns found across the country.

TSA officers found nearly 800 guns in Texas airports in 2018, which is about 18 percent of all gun discoveries in the country.
KVUE

"That’s a very high number," Austin airport traveler Esker Peoples said. "Very high. I just wouldn’t expect somebody to do that, you know."

Peoples, also flying out of Austin’s airport this week, said he is shocked so many people would take a gun through airport security.

RELATED: Surrendered or lost items from Texas airports end up at surplus store in East Austin

But Lt. Fleming said, usually, the guns they find are from people who forget they have it in their bag. Even though it’s an accident, it’s still something to worry about. 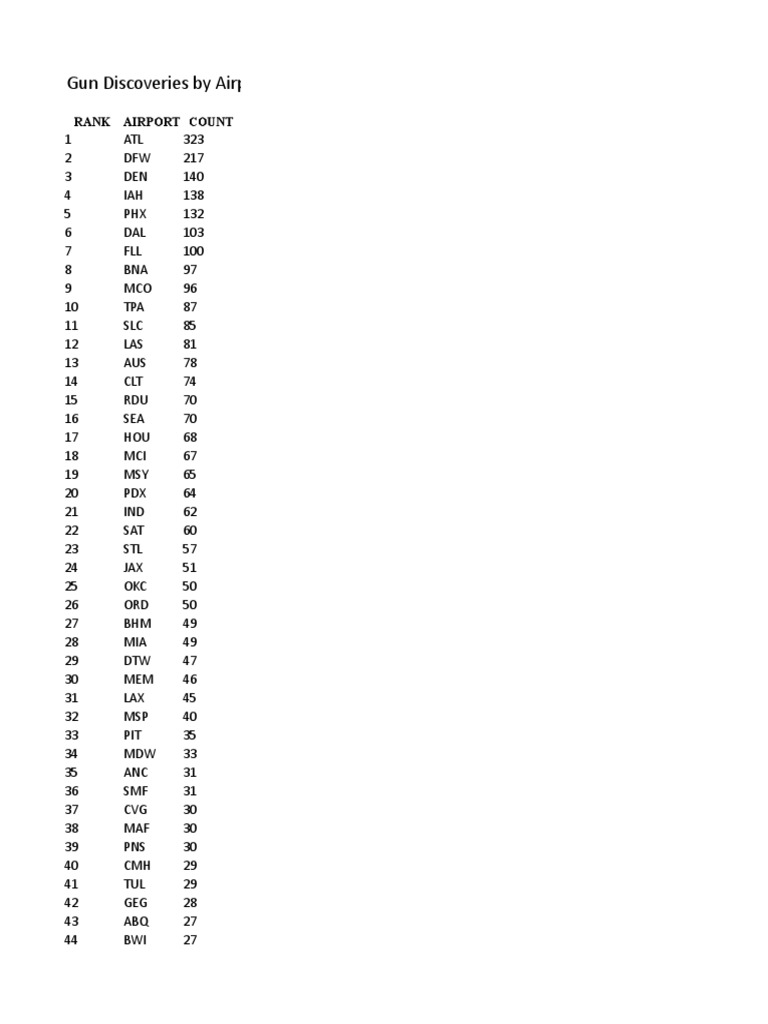 Gun Discoveries Web
Discover everything Scribd has to offer, including books and audiobooks from major publishers.

These numbers don’t include guns travelers legally check – just those they try to bring through security.

If you’re caught with a gun in Austin’s airport, and you have a license to carry, Texas laws protect you from getting any state fine or going to jail. But you could still face federal fines for bringing your gun into airport security.

The best recommendation from TSA and police is to double-check your bags before you get to the airport.