A growing number of Central Texas residents are threatening to sue cities as a last-ditch effort to keep treated wastewater out of Hill Country waterways.

AUSTIN, Texas —
One of the biggest concerns with all the growth in Central Texas is wastewater and what to do with it.

For years, the KVUE Defenders have shown the growing number of cities dumping treated wastewater into the rivers and lakes where we get our drinking water and enjoy with our families. Now, the fight against it is landing some cities in court.

The San Gabriel River winds its way from Burnet into Williamson and Milam counties, 50 miles through some of the most scenic parts of Central Texas – and now hotspots for growth. But with the development are cries for help to keep this once-pristine waterway, and others like it, from being polluted.

The search for a simpler life led Stephanie Morris and her family to this spot in Williamson County.

“It's not a coincidence that we ended up buying this place. We are outdoorsy, water people,” said Morris.

They found five acres along the South San Gabriel River, a perfect place for their Bird N Bees Farm and for their children to play – or so they thought.

“This was supposed to be a place of freedom, to learn and to roam and a healing, healthy place for them in our family, specifically given their other challenges," she said. "And so the fact that we can't use it and it becomes another area that we have to try to keep them safe, is beyond frustrating.”

Stephanie said even the bees’ behavior has changed.

“I'd see them drinking from the direct rivers, landing on rocks in the river and drinking the river, water and eddies and stuff. But now I don't see them,” said Morris.

Just upstream, the Liberty Hill wastewater treatment plant has permission from the state to dump 1.2 million gallons of treated wastewater discharge into the San Gabriel River every day.

Yet, according to EPA records, it has exceeded permitted discharge limits 98 times since 2015, 15 times this year.

And despite more than 50 permit violations cited by the Texas Commission on Environmental Quality, the state now allows Liberty Hill to expand operations to dump 4 million gallons per day.

The KVUE Defenders asked TCEQ how it allows this and it told us in part:

"TCEQ has initiated enforcement against the city for permitted effluent violations and for violations documented during on-site investigations. On Aug. 22, 2018, the TCEQ issued Agreed Order Docket No. 2017-0141-MWD-E. The city complied with the terms of this order in August 2019, after returning to compliance with effluent violations. On June 16, 2020, TCEQ issued Agreed Order Docket No. 2018-1024-MLM-E, which is currently being monitored for compliance. If the city fails to comply with the terms of this order, the commission may initiate additional enforcement remedies including pursuing an administrative order for violation of the existing order or referral of the case to the Office of the Attorney General for enforcement through the courts, including potential civil penalties and injunctive relief."

Note: The full TCEQ statement can be found at the bottom of this article.

It is why Stephanie decided to take things a step further. Along with attorneys from the Texas RioGrande Legal Aid, she filed an intent to file a lawsuit.

“So despite how uncomfortable it was for me to talk to a lawyer to begin with, or even deal with organizations like the TCEQ and try to work within that system, that felt like our only solution,” she said. 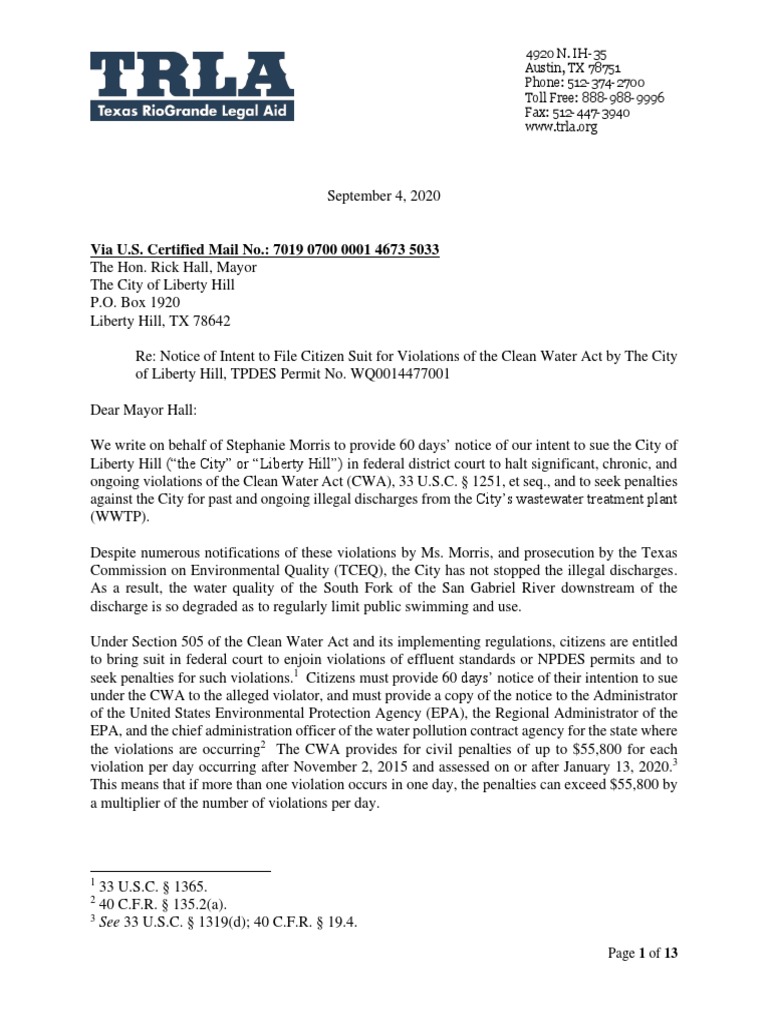 It's a problem the KVUE Defenders have been documenting for years.
Residents have shared videos with us.

In 2018 when we flew our drone over the river you could see the algae began where the wastewater entered the river.

You can still see the pristine water upstream from the outflow of the wastewater treatment plant and massive algae blooms for miles downstream from it. This is the same water that flows into Blue Hole in Georgetown, a coveted watering hole enjoyed by thousands of families every year.

"They are killing the river. They're destroying it. And that's really upsetting,” said LaWann Tull.

Tull's grandchildren were baptized in the San Gabriel River behind her Georgetown home years ago. Now she said they won't go near the water.

“People need to know, they need to know what's happening. I mean, this impacts the groundwater, the Edwards and Trinity Aquifer, the wildlife, the fish. Gary Park is right there,” she said pointing across the river from her backyard. “Five-hundred and something acres, and before it got this bad this time, there were people with little children playing right out there.”

"The Edwards aquifer is in this area. A lot of these Hill Country waterways either recharge or contribute to the Edwards aquifer. You can say very selfishly that I get my water from the Colorado River, so there's no problem. Well, guess what? All these waterways empty into it,” said Clifford.

Thousands of permits across state

This is not an isolated problem.

RELATED: Should treated wastewater be dumped into Central Texas waterways?

Development has increased the pace of the problem. As more houses go up, wastewater needs increase, leaving cities to figure out how to handle the increased load.

“It is treated, so it's clear it doesn't look like raw sewage, but it's very high in nutrients like phosphorous and nitrogen, and once those get into the water they cause algae blooms. Once you have that you get a river that turns from a very clear river into one that's covered with algae,” said Mike Clifford with the Greater Edwards Aquifer Alliance, which works with communities to ensure Central Texans have clean water.

He is among those helping Blanco residents who have been trying to keep that city from expanding its permit. Right now, the City is allowed to dump 95,000 gallons of treated wastewater a day into the Blanco River. However, the City applied to increase that to 1.6 million gallons a day last year and, after talking with residents, just recently dropped that request to 450,000 gallons a day.

"On its best day, it's more than gross, it's dangerous. And on its worst day, it's going to ruin this area that we love so much," said J.T. Morgan, president of Protect our Blanco.

“The destruction of the river and this beautiful Hill Country is inexcusable. And they keep building,” said Tull.

From Blanco to Liberty Hill to Georgetown, Central Texas is known for its beautiful scenery, pristine water and its growth.

“We're not going to ignore it anymore,” said Morris.

But where the water flows, worry follows. The decisions made today will impact generations to come.

“Texans deserve better than what they're getting here,” said Tull.

There are other ways to handle treated wastewater.

The KVUE Defenders have shown cities like Lakeway and Marble Falls that reuse treated wastewater to irrigate parks and golf courses.

It costs more upfront, but studies show it is safer than dumping directly into waterways.

Credit: KVUE
Marble Falls has recycled treated wastewater since 2011, using it in the sprinkler system of city parks, saving the city 15 million gallons of water a year.

When asked why the TCEQ doesn't require cities to use these alternative methods, the agency said:

"TCEQ develops TPDES permits in accordance with state and federal regulations to be protective of water quality standards and the designated uses of the water bodies. TCEQ has no jurisdiction to require an applicant to use a different method of disposal or treatment if the method they have selected complies with the applicable requirements."

"Under the Texas Pollutant Discharge Elimination System (TPDES) program, Texas is authorized to issue permits to facilities discharging pollutants into the state's waterways and to limit the amount of pollutants discharged. The City of Liberty Hill has been issued a TPDES permit which authorizes it to discharge in compliance with its TPDES permit. The TPDES permit requires each permitted facility to routinely monitor its discharges and report the results to the TCEQ using a Discharge Monitoring Report. Each permittee monitors the levels and types of pollutants discharged and other defined parameters (such as flow) and reports them on a defined schedule to the TCEQ. The DMR details the results of facilities’ self-monitoring activities. The DMR data is captured in the EPA’s Integrated Compliance Information System (ICIS). The DMR data is used to determine facility compliance with the issued permits. ICIS performs an automated compliance check looking at discharge parameters, as well as reporting requirements (such as the monthly submittal of DMRs and annual sludge reports). ICIS compares the actual pollutant discharge levels, to the levels allowed by the facility's permit. If a violation is identified, ICIS generates a report that flags the facility and the noted noncompliance. TCEQ staff monitor this data and when a violation is documented, the alleged violator (respondent) may be sent either a Notice of Violation (NOV), or a Notice of Enforcement (NOE), depending on the severity of the violation in accordance with the TCEQ’s Enforcement Initiation Criteria. In either case, the respondent would be required to undertake all corrective action necessary to resolve the violation.

TCEQ has initiated enforcement against the city (Liberty Hill) for permitted effluent violations and for violations documented during on-site investigations. On Aug. 22, 2018, the TCEQ issued Agreed Order Docket No. 2017-0141-MWD-E. The city complied with the terms of this order in August 2019, after returning to compliance with effluent violations. On June 16, 2020, TCEQ issued Agreed Order Docket No. 2018-1024-MLM-E, which is currently being monitored for compliance. If the city fails to comply with the terms of this order, the commission may initiate additional enforcement remedies including pursuing an administrative order for violation of the existing order or referral of the case to the Office of the Attorney General for enforcement through the courts, including potential civil penalties and injunctive relief."

WATCH: KVUE Defenders: Cities may be sued over wastewater dumping