A representative from a veterans non-profit says they lost thousands of dollars of donated items after urine from homeless people ended up in its storage unit. 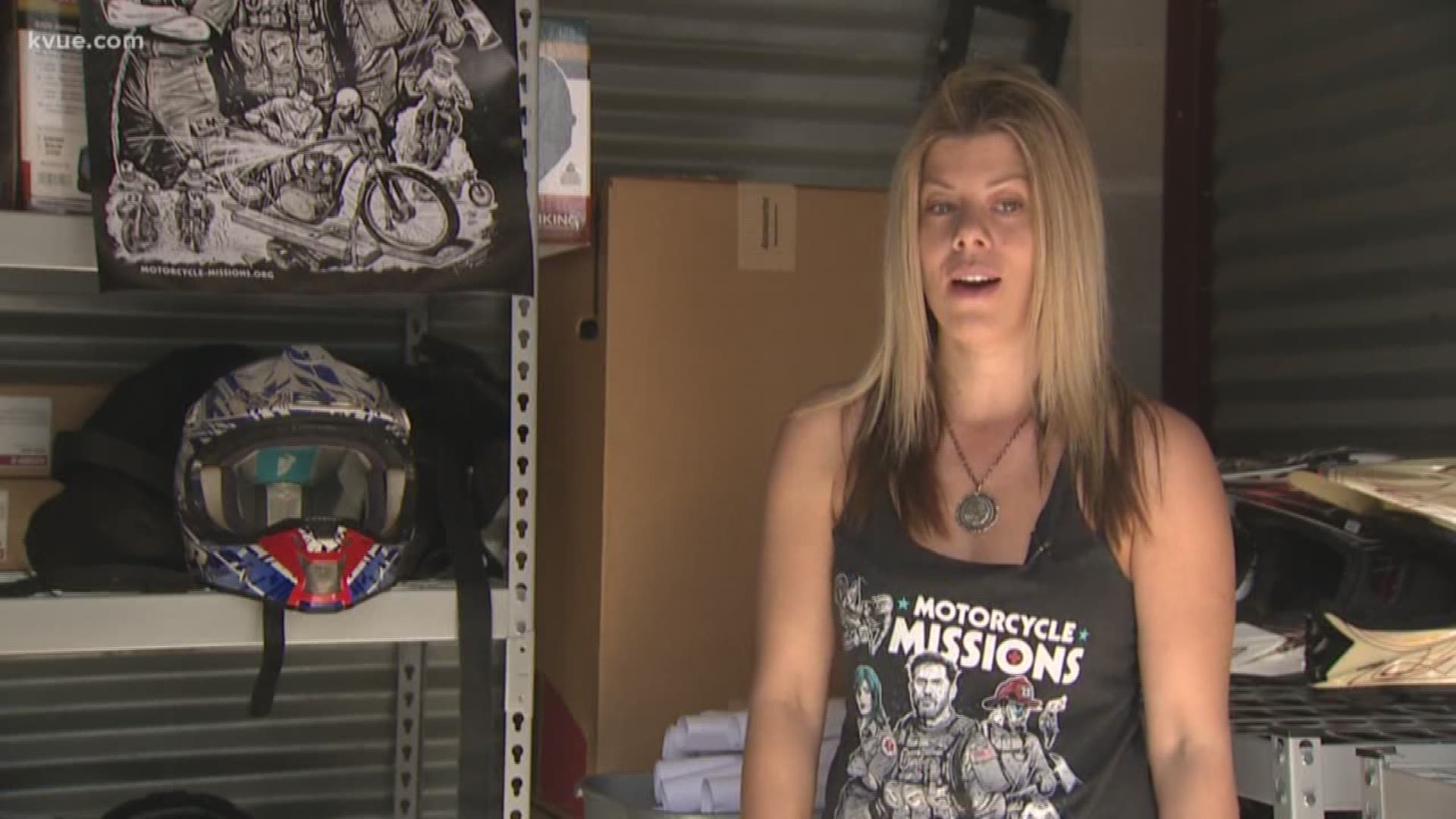 AUSTIN — On the surface, it's just stuff ruined inside an Austin storage facility. But the KVUE Defenders found the issue goes deeper.

What was destroyed holds a special power and how it was lost speaks to a larger problem.

Under lock and key and stashed away in a storage facility like any other treasure sits Krystal Hess' gems.

"These are some of the helmets," said Hess, as she showed KVUE's Mike Rush around. "Some chest protectors for the motocross."

All of the equipment is more than just a reflection of a hobby. You can call it tangible proof of Hess' passion.

"When (veterans) come home, you know, the shadows start coming out from the walls. They struggle," said Hess.

To fight back the shadows of Post-Traumatic Stress Disorder, veterans and first responders turn to Hess' non-profit organization, Motorcycle Missions, to build and ride motorbikes.

"Getting together, building motorcycles and riding the motorcycles gets them out of their head," she said. "I know that my program saves lives."

But Hess had to move her charity collection to another storage facility after a devastating blow at her previous storage facility, St. Elmo Self Storage. It's a setback she never saw coming.

"The people next to me -- they somehow urinated in their unit," said Hess.

It ruined $2,000 worth of equipment she collected through donation drives.

"I had the boots and the helmets and everything here and the urine came underneath this wall," she said. "And it was foul."

All because people were living in storage units next to hers.

"Laying in there, sitting on chairs, cutting up apples, doing their nails," she said.

Management refused to pay for her damage, Hess said. The rental agreement states the company is not responsible. People continued to live there, she said, even after the facility was sold earlier this year.

KVUE's Rush tried speaking with the new manager about the problem.

"Do you mind opening the door? I'm having trouble hearing you," Rush said through the locked door to the management office.

Manager: "Who are you with?"

Rush: "My name is Mike, I'm with KVUE News. Do you mind opening the door so we can talk to you?"

Manager: "No. Actually, I'm going to ask y'all to leave."

So Rush and his photographer left and minutes later the manager walked across the street to them.

"Here, this is my boss. He said that he would make a statement and explain everything," said the manager.

That boss is Monty Rainey with RPM Storage Management in New Braunfels. Hired by the new owners, he said he removed 14 people living in units soon after ownership changed hands and two more since Rush's visit.

"It shouldn't be a surprise to us that people are living anywhere they can really," said Ann Howard, who runs the Ending Community Homelessness Coalition also known as ECHO.

She said policies, money and community involvement will make a difference.

"Austin has got to step up and address the solutions to homelessness or I'm afraid we're going to see more of this," said Howard.

This is compounded by the fact that the City of Austin's code department said storage units are not habitable and people cannot be allowed to live in them. Meanwhile, Hess may have a new space, but she's still out equipment.

"I need to have gear for my guys and I don't have it because it was destroyed," she said.

If you'd like to help Hess recoup some of her destroyed equipment, click here. To find out more about how you can make a difference to end homelessness, click here.