David Passman survived when his home exploded in October of last year. His longtime girlfriend did not.

AUSTIN, Texas — An Austin man who survived a gas explosion in his southeast Austin home is suing Texas Gas Service for negligence. So is the estate of his longtime girlfriend who he lost that day in 2018.

The KVUE Defenders uncovered what happened to him is very similar to a Austin home explosion six years earlier.

Helpless, homeless and heartbroken, Passman has spent the last year in and out of the hospital. He’s undergone nine surgeries and faces more.

The home where he lived is a total loss. His injuries were so severe he has been unable to work. His recovery has been slow and exhausting but it's nothing compared to dealing with the loss of the love of his life.

"I can't put it into words. The heartbreak, it was like dying. It was like part of me died,” he said.

"It was a normal day. I walked in my house and BOOM! The house exploded," he recalled.

RELATED: The owner of the house that exploded in South Austin in October has died, but her cat is still alive

Passman woke up in the hospital nine days later and learned his longtime girlfriend, Nicole Burton, had died.

The concussion makes it tough for Passman to remember much from that day. His neighbor, Linda Lopata, can't seem to forget.

"It literally lifted my car off the ground," she said.

1 / 10
Courtesy of David Passman
David Passman is still recovering after his home exploded in 2018. His longtime girlfriend, Nicole Burton, did not survive.

She was driving by when the explosion happened.

“There was just stuff flying everywhere," she said. "As soon as I realized what had happened, I shut the car off and started running towards the house. And then, all of a sudden, she appeared out to the side of the house, all this rubble.”

“She said, 'I turned on the oven to make a pizza and it went boom.' And that's all she could really say to me,” said Lopata. “I was there for her last moments.”

"His feet were burned so bad they were like webbed feet," she said. "I've never seen people that were burned.”

"The last thing we expect in our homes is that they're going to blow up," said attorney Mike Davis, who represents Passman in a lawsuit against Texas Gas Service.

"We would like to hold Texas Gas accountable for the danger they've created,” he said.

They allege in the lawsuit that a "cracked and heavily corroded pipe" by Texas Gas Service was responsible for causing the explosion.

And its "dilapidated and crumbling infrastructure creates a significant risk. "

They also claim the company's "negligence in maintaining its system of pipes as required" put Passman and Burton in danger and puts other "Travis County residents at risk for suffering a sudden and catastrophic home explosion."

"It could be your home, it could be my home, and there's no way for us to know," said Davis. 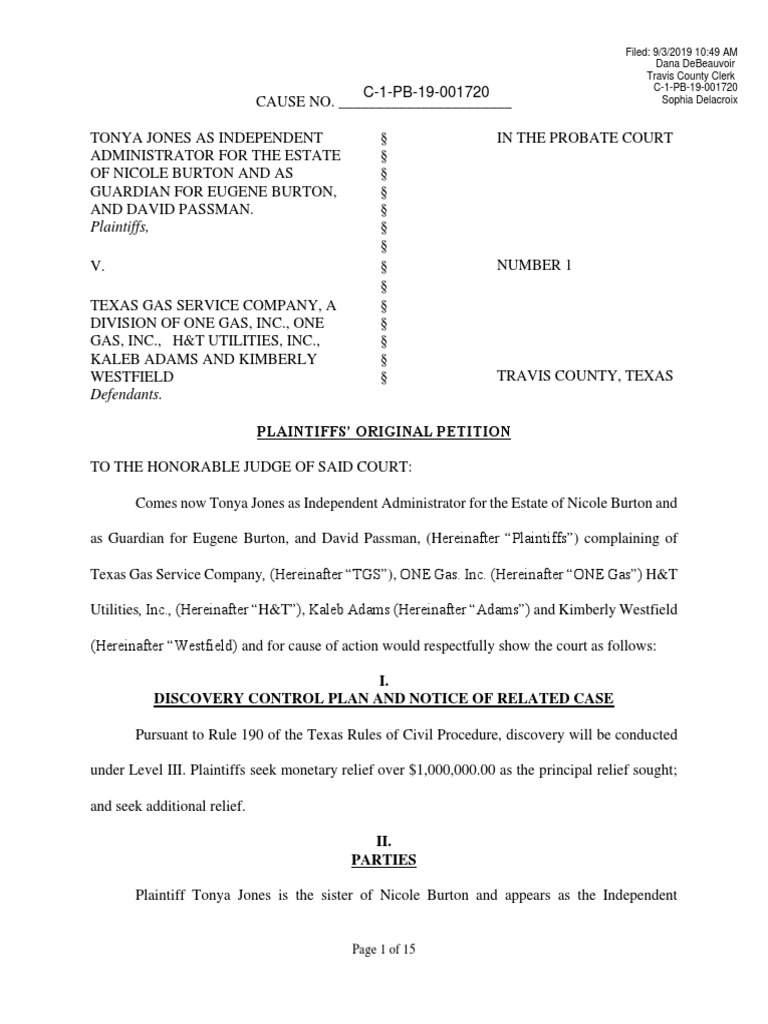 This isn't the first time a home serviced by the company has exploded. In 2012, an aging Texas Gas Service pipe cracked, triggering an explosion at a home on Payne Avenue killing a single father.

"Unfortunately, the first sign that there may be a problem is someone's house blows up – and that's just unacceptable,” he said.

Passman's future is filled with unknowns. After nine surgeries, he is now able to walk again but he cannot move all of his fingers.

"It's been hell," he said. "I'm just now working again. I've just gotten my hands to where they will work again and my mind."

RELATED: Austin house explosion that sent 2 to hospital believed to be ‘isolated incident’

He's been living in the Salvation Army shelter feeling lost, lonely and broke. And everywhere he turns are reminders of what he lost and the risk that remains.

“I don't want this to happen to anyone else,” he said.

We reached out to Texas Gas Service for a statement. Here is the company's response:

"Texas Gas Service does not comment about allegations or pending legal issues.

We take our responsibility for delivering natural gas to all our customers in a safe and reliable manner very seriously. We routinely monitor and maintain our natural gas distribution system using processes that meet or exceed requirements as defined at federal, state and local levels. Safety is our highest priority at Texas Gas Service.

We would like to remind everyone that if you do smell natural gas, leave the area immediately then call 911 and the Texas Gas Service Emergency Line at 1-800-959-5325. (This line is monitored 24/7). Do not use any electrical equipment such as phones, garage doors, light switches until you are a safe distance away from the odor."