The KVUE Defenders continue investigating compounding pharmacies and whether the state is doing enough to keep people safe. 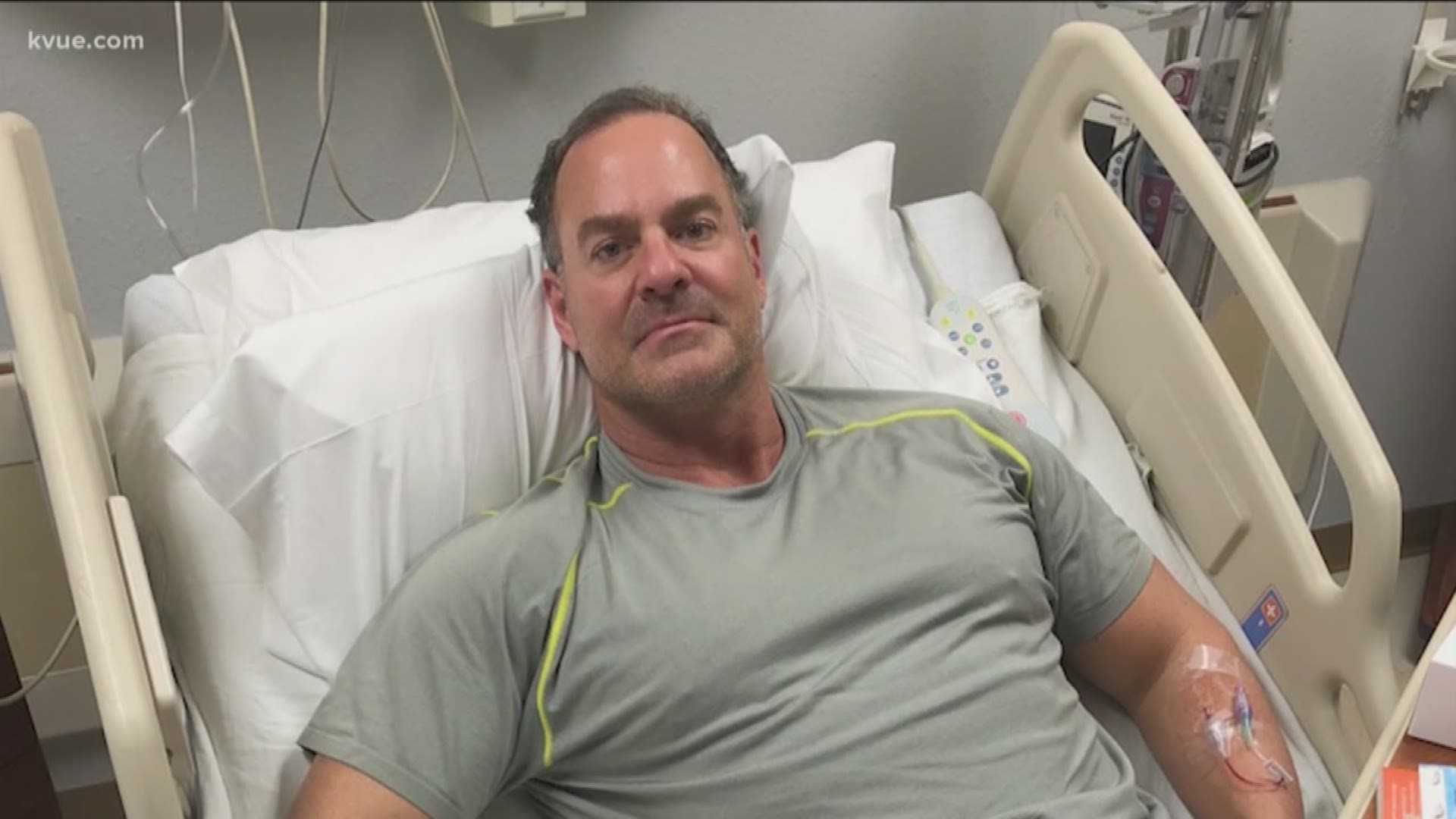 BOERNE, Texas — He thought it was a pulled muscle, but it turned out to be a rare bacterial infection spreading in his leg.

“[My wife and I] wanted to get the most out of our body as we age. Like most Baby Boomers, we want to make sure we remain active and do the things that we enjoy,” said Reeh.

To help his muscles recover, Reeh took injections of a liquid amino acid drug developed and recommended by his doctor.

Without it, “I’d probably feel more like the 54-year-old that I am,” said Reeh.

He said the injections worked well, for 10 months. Then, at an out-of-town conference, he woke up sweating.

“The bed was a pool of water. I had such a raging fever,” said Reeh.

His leg was swollen.

Reeh didn’t know how he would make it to the airport.

Once home, doctors told him mycobacterium abscessus was growing in his leg.

Mycobacterium abscessus is not common. It’s found in water, soil and dust, according to the Centers for Disease Control and Prevention.

And it’s hard to kill.

“It’s very scary to hear your doctor say we don’t know how to treat this,” said Reeh.

The treatment included 23 different surgeries over five months. During each procedure, doctors scraped the damaged tissue and drained fluid built up in his leg. Staples wouldn’t keep the wound closed, so Reeh used a wound VAC for 103 days. Doctors put him on five antibiotics.

“The worst part of it was the toxicity of the antibiotics in the body,” said Reeh.

Some of the antibiotics flowed through a PICC line for 154 days.

1 / 8
Jeff Reeh
Jeff Reeh worked out regularly. He lifted weights, played sports and stayed active, until one day he developed a rare infection he says came from a compounded drug injection.

Reeh risked kidney failure. The antibiotics caused rashes on his chest, face and back. He consistently felt nauseous.

Then, on March 6, Reeh felt a new side effect: ringing in his ears. The next day he told his doctor.

Reeh wanted to keep his leg, keep taking the antibiotics.

“It’s that I’ve been active my entire life. I wanted to remain active without being a burden to my family, my loved ones,” said Reeh.

Compounding pharmacies are pharmacies that mix and tailor their own medicines for patients but without FDA testing or approval like standard prescription drugs.

Pharm D Solutions was listed as a sterile and non-sterile compounding pharmacy that also manufactured compounds for more than one patient. Manufacturers have tighter regulations.

When the KVUE Defenders reached out, the owners of Pharm D Solutions and attorney would not answer any questions.

But other agencies found sanitary issues.

In 2018, inspectors with the Texas Department of State and Health Services noted 14 “observations” including, “facilities are not designed to minimize potential contamination and/or mix-ups.” The state sent a warning letter two months later.

Federal inspectors found sanitary violations dating back to 2014. In 2015 FDA inspectors noted, “procedures designed to prevent microbiological contamination of drug products purporting to be sterile are not established.”

After that inspection, FDA records show the pharmacy recalled some of its drugs, “due to mislabeling.”

In December 2016, the FDA to issue a warning letter showing, “several of your proposed corrective actions appear adequate, others are deficient.”

Then, in August 2018, the FDA inspectors noted other sterility issues including “both technicians” had “bare skin exposed” while working on a sterile compound and drugs which “failed or are without potency testing were released and distributed.”

Less than a month later, the FDA issued a recall for all Pharm D Solutions’ sterile compounded drugs.

Then, in May 2019, the FDA filed a permanent injunction. The facility closed and its drugs were destroyed.

FDA, DSHS and Pharmacy Board Files

The KVUE Defenders asked Texas State Board of Pharmacy’s executive director, Allison Benz, why the board didn’t shut down Pharm D Solutions and why the pharmacy and pharmacists have no disciplinary actions on their records.

“The violations found in those inspections were procedural and wouldn’t be something we would shut a pharmacy down for,” said Benz.

Benz said the pharmacy was regulated differently because it was an outsourcing facility listed as a 503B. Those pharmacies are regulated by the FDA and the Texas Department of State Health Services. The State Board of Pharmacy handles administrative policies and procedures for outsourcing facilities, not the same sterility inspections as DSHS and FDA.

“It’s obviously troubling,” said Chip Brees, Reeh’s attorney. “Despite the history of failures by the State and the FDA, the pharmacy continued to operate.”

Reeh got sick a few months before the last FDA inspection, before the recall.

“By that point it was too late. The harm had already been done,” said Brees.

Reeh’s hearing is now impacted. He describes it as the sound of a pressure cooker.

In those reports, the Defenders showed how the State Board of Pharmacy investigations on compounding pharmacies, which are not outsourcing facilities, can take years to issue enforcement action.

Pharmacy board inspectors check pharmacies every two years or when they get a complaint.

Reeh’s leg is almost healed now, but the trauma lingers. He said his travel is limited because he can’t risk another infection.

“We have nothing left to fight it with,” said Reeh.

He said this experience gave him a new perspective on life.

“You learn to take no days for granted. Enjoy every day God gives you because you don’t know the next day,” said Reeh.

Pharm D Solutions pharmacists work at other pharmacies in Houston.

How to file a complaint about a pharmacy: