Hernia surgeries are common. But this woman's complications from surgical mesh have changed her life. 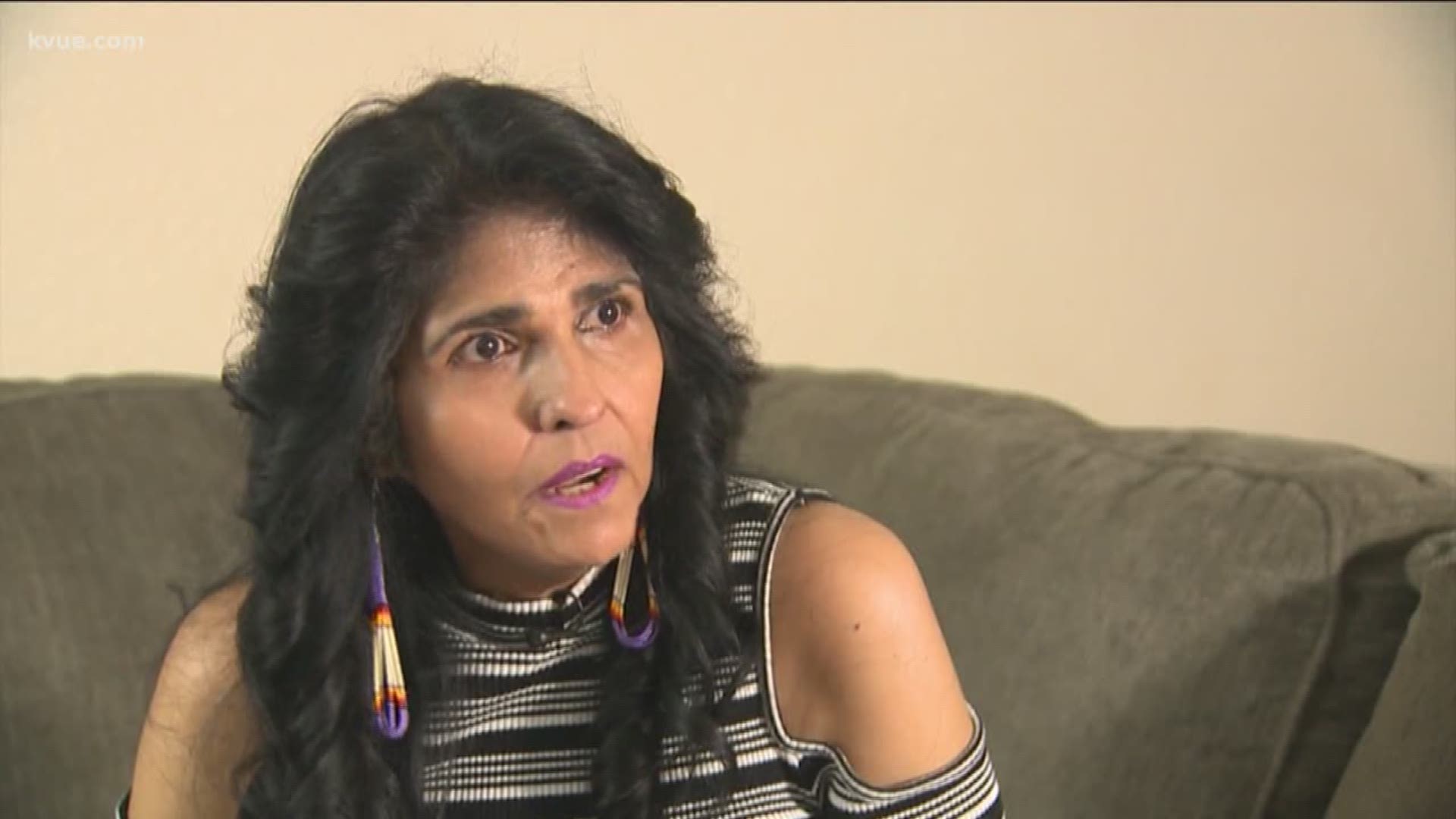 AUSTIN, Texas — More than one million hernia surgeries are performed in the U.S. every year. The majority of those surgeries involve plastic mesh.

Last month, the Food and Drug Administration ordered manufacturers to stop selling mesh for use in pelvic prolapse or urinary incontinence cases.

Despite that and thousands of issues reported to the FDA, plastic mesh continues to be the standard treatment for hernias with sometimes life-changing consequences.

Stuck at home is not how Carmen Pacheco expected to live out life in her 50s.

Credit: Carmen Pacheco
Carmen Pacheco didn't expect she would be stuck at home in her 50s. But that's what hernia surgery has done to her.

Her pain and worry are matched by her mountain of medical bills. It’s a spiral that began six years ago when doctors performed what most consider routine surgeries. They implanted plastic mesh for pelvic prolapse and a hernia.

“They never told me what could happen and a year to the day I had a strangulated hernia. The ambulance had to come pick me up,” Pacheco said.

A second surgery resulted in a massive infection. A third surgery brought her more pain.

A woman's life changes after getting mesh implant on hernia

FDA flooded with thousands of lawsuits

“I've seen a lot of plaintiffs have a lifetime of injuries as a result, a lifetime of additional surgeries in pursuit of repairing what's been done,” said Melissa Nafash, who does not represent Pacheco, but is a New York attorney whose firm handles more than 10,000 hernia mesh cases.

“Due to design defects in the meshes often there is a surgery to remove that mesh. Polypropylene -- which a lot of these products are made of -- can be thought of like a window screen, and tissue is intended to grow into that screen. It's as if you pour cement through a screen and let it dry and try to pull that screen out. It has become a part of the body,” she said.

Sound familiar? It should.

In February dozens of women shared their stories at an FDA hearing about the problems associated with pelvic mesh.

“The doctor reported mesh had eroded into my bladder, attached to my bowels, my nerves and my muscles,” said Jodie Callahan, a mother who had surgery in 2010 at the age of 45.

Three years of pain later, she had the mesh removed. But recently she learned she has to undergo another surgery after she said her doctor found more plastic mesh inside her body.

“This is affecting lives and it's major, and no one is really listening to us,” said Barbara Melling.

Boston Scientific apologized to the women.

“On behalf of Boston Scientific and myself as a physician, I want to express my deepest sympathy and my sincere empathy for those women who have been harmed by surgical mesh therapies,” said Dr. Ronald Morton Jr., a medical doctor with the urology division at Boston Scientific.

“Boston Scientific is purposeful and committed to provide medical devices that are safe and effective and supported by clinical evidence supported by physician training and the best possible outcomes,” he said, citing studies that show the mesh devices continue to improve.

Former IT manager for the FDA, Madris Tomes, was at that hearing too.

“I wanted to present data on all types of mesh, but they only wanted to see it for stress urinary incontinence or pelvic organ prolapse,” said Tomes.

Tomes left the FDA and started Device Events LLC which runs a website that makes information about problems with medical devices easy to find and understand.

“I did a search on hernia mesh and I found 25,000 adverse event reports to the FDA and over 200 of those reports were deaths,” Tomes said.

Last month the FDA ordered manufacturers to stop selling pelvic mesh. Yet, the organization made no mention of hernia mesh.

“The FDA has determined that the manufacturers, Boston Scientific and Coloplast, have not demonstrated a reasonable assurance of safety and effectiveness for these devices, which is the premarket review standard that now applies to them since the agency reclassified them in class III (high risk) in 2016,” the FDA said in explaining its stance on pelvic mesh.

“They really need to be looking at what are all the other devices just like this,” Tomes said.

The problems tend to be reported 10 years or longer after the initial surgery. Device Events shows the problems increasing, especially in the last two years.

According to FDA reports, the most common problems from surgical mesh include infection, mesh adhering to internal organs like the colon or bowel and even sepsis and death.

Credit: Carmen Pacheco
Carmen Pacheco has been in and out of the hospital since she got surgical mesh implanted in her body for a hernia surgery.

“I have bowel obstructions,” said Pacheco. “I’m throwing up bile every morning.”

Pacheco is not alone. Device Events found more than 5,000 bowel obstructions and more than 5,600 infections in people with hernia mesh. Most of those have been happening since 2007.

She used to weigh 225 pounds. Now she is barely 125 pounds and faces another surgery by an out of state doctor who said her only hope is to add more mesh.

“They destroyed my life -- the mesh,” she said.

Why do surgeons use mesh?

Dr. Vineet Choudhry does not treat Pacheco, but is a general surgeon specializing in hernia repair.

“I've done close to 1,000 hernia repairs and put in mesh in almost every single one of them,” said Dr. Choudhry. He said that, years ago, hernias were repaired using sutures or biologic mesh made from animal tissue or human cells.

“That mesh tends to absorb away over time -- gets real soft and pliable and doesn't last very long. So, it's not really a permanent solution, but it helps temporarily,” he said.

Credit: KVUE
The FDA banned the use of surgical mesh in certain operations.

"While meshes are obviously beneficial, they remain associated with several serious complications including hernia recurrence, infection, chronic pain and adhesions," the report said.

Plastic mesh has been used to repair hernias by surgeons since the 1950s, but more frequently since the 1980s.

“The great majority of patients tolerate the mesh extremely well and don't even know that it's in there,” said Dr. Choudhry.

He said he has only had to remove one mesh implant from a patient who suffered an allergic reaction.

“When mesh goes well, it goes really well,” Tomes said. “But when it doesn't, it's not just a little bit of pain, it's disabling -- where people need multiple surgeries -- as many as six surgeries, 10 surgeries.”

Choudhry said the plastic mesh has to be sutured in place.

“The mesh doesn't stay where it's put by itself,” Choudhry said. “Over a period of time it will incorporate into the surrounding structure, but as it's healing, it can definitely shift or move.”

The mesh is supposed to be permanent.

“Hernia mesh is used to resolve that hernia. Due to design defects in the meshes often there is a surgery to remove that mesh. That mesh is sometimes adhered to the bowel or the omentum (the fatty tissue that covers and supports the intestines). In some cases people who have had these meshes have to have portions of their bowel or omentum or other internal organs removed,” Nafash said.

How did we get here?

“None of these products have gone through the rigorous process of being FDA approved. They're all cleared,” Nafash said.

She’s referring to the 510K process, which the KVUE Defenders reported on in March.

“Often products that aren’t even used in the same region (of the body) as the product that is sought to be cleared, are what the product is claimed to be substantially similar (to). There are different forces at work in those regions, different organs and layers of tissue and muscle. I think it is the companies themselves that are responsible for putting a product on the market that is safe,” said Nafash.

Why there are no class-action lawsuits surrounding mesh surgeries

In mass tort, each case is individually filed with the intention of having only a few cases go to trial.

If you have surgical mesh in your body, be sure to monitor for pain and see a doctor.

KVUE started a Facebook group called "Medical Device Dangers" for those dealing with medical devices to share their experiences and to provide resources and support to one another. Be sure to join the conversation with reporter Terri Gruca on Facebook, Twitter and Instagram.