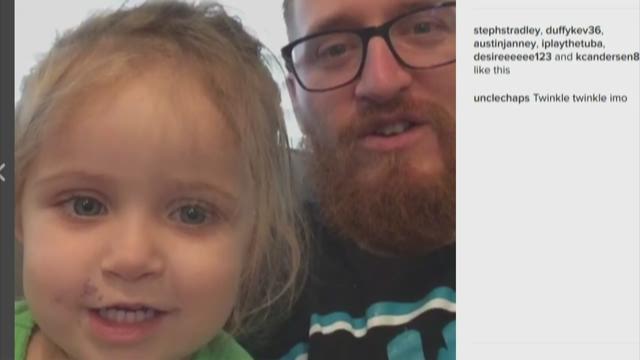 Chaps McNealy is better known by his now-famous Internet persona "Uncle Chaps" where he regularly blogs on Barstool Sports.

But before he drew attention by trolling sports reporters with fake reports or shooting videos of himself lip-syncing, he lived a much different life.

"I was never really a tough dude. I was always like the class clown I guess. So I wanted to do something completely different. Bible School to Marine Corps accomplished that goal," explained McNealy.

In 2004, Chaps completed training at several bases before being stationed in Okinawa for four years. He eventually made his way to Iraq where he saw combat first hand.

“People had snuck in through canals around and we got attacked. And a round came through a window and struck me in my arm," said McNealy.

Amidst all exchange of gunfire one thing was on his mind.

It’s that mental aspect of war – the one we don’t see but veterans feel – that Chaps is now fighting and trying to bring to light.

After he finished his tour, Chaps came back to the States where at first he adjusted back to civilian life fine.

“I was very high on the side that PTSD doesn’t exist. That it’s a sign of weakness.”

But his then-fiance and current wife – a psychologist - began to notice signs that something wasn’t right.

"Every time I was around gunfire, whether it was 9 Mil, 50 (caliber), whatever, the regular rifle rounds, the M 16. I would constantly get diarrhea," Mcnealy explained. At first, he wrote it off as food he ate.

But a medical check-up would showed he had scar tissue from a traumatic brain injury that lead him to his realization.

After accepting – and confronting – his PTSD issues, he’s now calling on others to do the same before it’s too late.

Chaps estimates he personally knows about two dozen fellow soldiers who took their own lives after combat, at least 10 of whom he’d consider close friends.

It's why he spends so much time busting misconceptions surrounding it - like PTSD is only a new phenomenon.

"What we don't focus on (in regards to veteran suicides) is that most of those, the highest percentage of those, are veterans who are 50 and older. So what that shows me is that it was the same exact thing. It's not a fact that that this generation of millenial is a weaker warrior than the ones in the past. It's the fact that people weren't getting treatment."

Another reason why so many struggle- the hidden scars. McNealy earned a Purple Heart for his service, but said the hidden scars - the psychological ones - are tough to discuss because they're not visible to others.

"If I was constantly getting treatment for my arm to repair some of the nerve damage that happened, nobody would think I was weak. But if I was going to see a psychiatrist or a psychologist because it's a mental issue, all of a sudden you're crazy or something's wrong. To me- if you're going through some of the traumatic events and pulling people out of bloody Humvees, seeing people on fire and there isn't some sort of treatment that you think that you need - you probably do."

This is where his three lives – a father, a Marine, and a blogger – truly intersect.

“You can still have fun, that you can be a dad who’s involved with his kids, who loves their kids, loves their wife, but also struggles with PTSD and depression. Like all of those things are possible. Just because you have PTSD doesn’t put you in this one little bucket," he added.

And that’s how Chaps lives.

Last month, he and two fellow bloggers, Big Cat and PFT Commenter, streamed a Facebook Live from inside a porta-potty outside a Chicago Bears – Jacksonville Jaguars game. It received over 120,000 views.

That newfound platform allows Chaps to balance the absurdity with the sincerity.

On top of his writing responsibilities on the site, he also co-hosts two podcasts: "Zero Blog Thirty" and "Podfathers." "Zero Blog Thirty," which he co-hosts with a fellow veteran "Captain Cons," discusses military themes.

"After we talk about PTSD, we get hundreds of messages that they want to go get treatment or that 'thanks for what we're doing and putting it out there.' Those kinds of things are incredible flattering," said McNealy.

He told me that much dialogue surround PTSD revolves on acknowledging it - rather than coming up with ways to address it.

"Let's talk about the things that can cure the poison tree instead of just pointing out that the tree is poisoned," he said.

On Thursday, to celebrate the Marines 241st birthday, he flew alongside his salt-of-the-earth boss Dave "El Pres" Portnoy to the Marine Ball.

And while they made content out of it, it also was a step to highlight the importance of Marines - to one of the web's fastest-growing and most loyal audience.

His final message, a simple one - to confront a complex stigma.

"Seek help. It doesn't make you weak, in fact it makes you strong," said McNealy.

If you or somebody you know is struggling with PTSD, but is afraid to reach out - McNealy said he's always available. Just send him a message by clicking here.

In “Charlie Foxtrot,” a team of investigators uncovers the reasons behind the national spike in service member suicides. This docu-series focuses on a Military policy that kicks service members out when they attempt to take their own life, leaving them without the help they were promised when they signed up to serve. “Charlie Foxtrot” exposes the trauma of war, taking viewers through a visceral experience as soldiers once driven to the brink of suicide open up emotionally and share videos and photos from the war zone. If, after watching, you feel compelled to help, please sign the Fairness for Veterans petition to Congress.