The cow stands 12'4" and is about 16 feet long. Its return is turning heads of drivers passing by and is also creating quite the frenzy on social media. 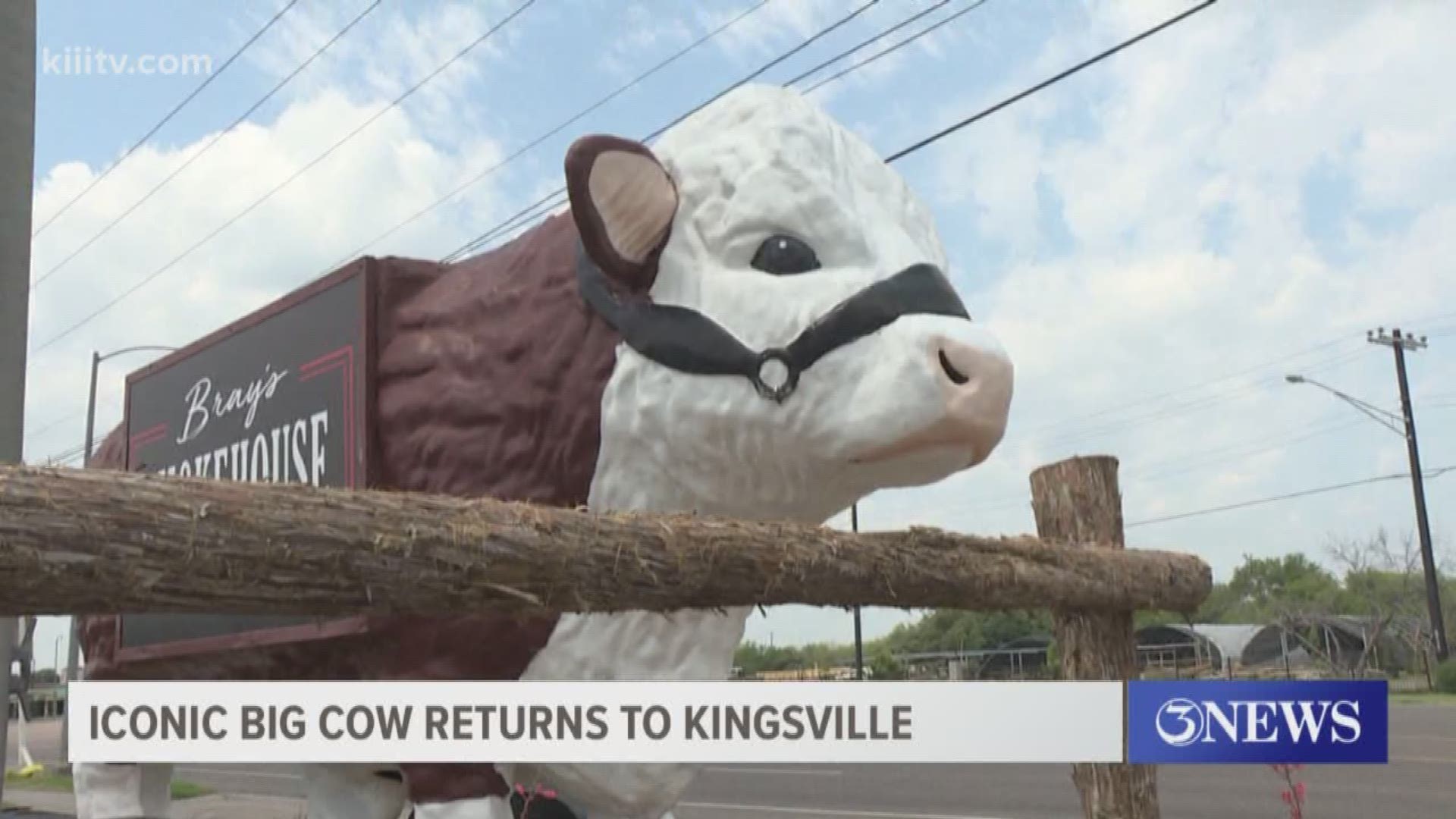 KINGSVILLE, Texas — Holy cow! Have you 'herd'? There's a familiar icon back in Kingsville and it 'udder'ly screams Texas!

The 'cow' as it's known to locals was a fixture in Kingsville, Texas, for nearly three decades until it was removed with the departure of Sirloin Stockade on South Brahma Boulevard. After four years, it is back and helping promote a brand new barbecue joint called Bray's Smokehouse.

"This was a real landmark in Kingsville," Mayor Sam Fugate said. "We knew to bring it back; people would be excited to see him home."

The cow's new owner, Justin Bray, who also owns the new Bray's Smokehouse, said the iconic cow has been in Floresville all this time and sitting in a field out to pasture.  It was being used to advertise some cattle that were for sale at a cattle ranch.  Bray said he was able to bargain for the larger than life cow and bring him back.

"I know this is a small town story, but this is Kingsville. We have a strong backbone with a prideful community, and this guy meant a lot to this community," Bray said.

According to Bray, you can expect award winning BBQ, and it will also be a place for talented beer drinkers with their craft beer.

The parking lot at Bray's Smokehouse didn't feel like home without the iconic cow.

Bill Churchwell 3 News
Holy cow! You never know what you'll find as you moooove through Kingsville.

"He was sitting in a field out to pasture, he was advertising some cattle for sale at a cattle ranch out there," Bray said.

The cow stands 12'4" and is about 16 feet long. Its return is turning heads of drivers passing by and is also creating quite the frenzy on social media.

"I don't know the benchmark for something going viral, but I think we went small town viral with 60-thousand views in the first 24 hours, 800 shares.  It's pretty overwhelming," Bray said.

"I think folks are going to be excited when he does open up.  I joked with him that I won't be able to come in for the next few months because there will be lines out the door," Manny Salazar said.  Salazar is the executive director of the Greater Kingsville Economic Development Council.

Bray's Smokehouse is scheduled to have its grand opening on Tuesday, June 18.