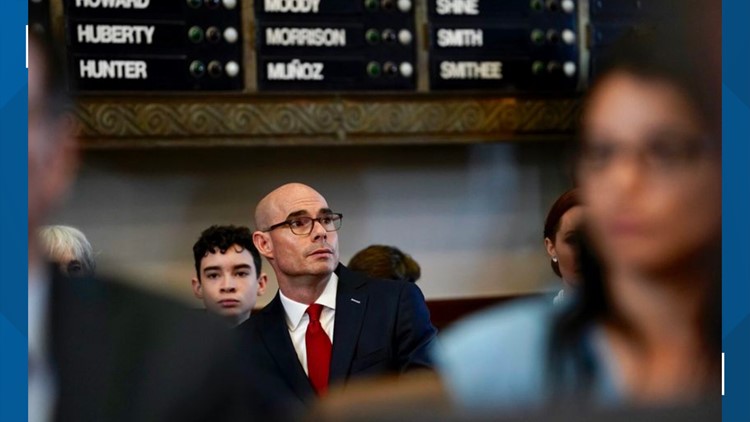 AUSTIN, Texas — Two members of the Texas House who listened Wednesday night to a recording of a meeting that has shaken up the Legislature refuted House Speaker Dennis Bonnen's denials that he offered a list of 10 GOP representatives for a hardline conservative group to politically target.

“What I derived from the audio tape — it’s very clear — is that Speaker Bonnen was not truthful about a list not being provided," state Rep. Steve Toth, a Republican from The Woodlands, told The Texas Tribune after he listened to a recording of Michael Quinn Sullivan, CEO of Empower Texans, visiting Bonnen's office June 12.

State Rep. Travis Clardy, R-Nacogdoches, who is said to be on the alleged list, later told The Dallas Morning News that what he heard is "consistent with" what Sullivan has alleged.

The recording has not been released to the public. Last week, Sullivan claimed that Bonnen and state Rep. Dustin Burrows, R-Lubbock, offered Sullivan's group long-denied media credentials to the lower chamber in exchange for politically targeting 10 GOP lawmakers. According to Sullivan, Bonnen left the room before Burrows handed over a list of 10 members for the activist's well-funded political action committee to target.

Bonnen has given a far different accounting of the meeting and has publicly declared that he looks forward to supporting all incumbents in their reelection bids. Before Toth spoke with the Tribune, Bonnen had called on Sullivan to release the entire recording.

"Mr. Sullivan," Bonnen said in a statement, "release your recording. Release it in its entirety."

Toth, who is not on the alleged 10-member list, told the Tribune that, according to the recording, "clearly, a list was referenced, over and over and over again. Multiple times."

"Honestly, I was caught off guard," said Toth, who was elected to the lower chamber in 2018 and was among the initial 109 members whose pledges of support allowed Bonnen to become speaker at the start of the 2019 legislative session. Toth, who also served in the House from 2013 to 2015, has received roughly $55,000 in donations from Empower Texans PAC or Texans for Fiscal Responsibility PAC, another political action committee tied with the group, since 2012, filings with the Texas Ethics Commission show.

"I have been a supporter of the speaker since day one," he said. "I love Dennis. I didn’t believe any of this. I was shocked. I am discouraged to see the light it put him in and the light it put on the Republican Party."

Bonnen, who is coming off a first session as speaker marked with House unity and major policy wins, has denied Sullivan's characterization of the meeting. In a statement released Monday, Bonnen said that "at no point in our conversation was Sullivan provided with a list of target Members." Burrows, who chairs the House GOP Caucus, has remained silent since Sullivan first published his allegations last week.

Clardy and Toth listened to the recording together in Austin hours after Sullivan disclosed its existence. Sullivan wrote Wednesday in a post on Empower Texans' Texas Scorecard website that he will allow "Republican legislators, party officials, and conservative movement leaders who may feel they are impacted by the recording" to listen to the audio in the presence of his lawyer.

Several other members on the list have plans to listen to the recording as soon as Thursday, multiple people with knowledge of the situation said.

The recording, Clardy told The News, "is the most disappointing thing that I've ever seen." He told the newspaper that Bonnen made "disparaging" comments about both Republican and Democratic members of the House in the recording. And Burrows, Clardy said, ticked off GOP names the group could target in the primary elections.

Clardy and Bonnen were not considered allies during this year's legislative session. In the lead-up to Bonnen’s unanimous election to the gavel, Clardy and one other House Republican were the last to exit the open speaker's race — a move that was largely seen as an attempt to delay, or perhaps block, Bonnen claiming victory.

On Wednesday, Sullivan revealed he recorded the meeting with Bonnen and Burrows to protect himself "from legal jeopardy" and to protect his family and Empower Texans.

"Speaker Bonnen and Rep. Burrows must recant their false claims. All of them. Immediately," Sullivan wrote. "If they do not, I believe I will be obligated to release the recording — in whole or in part, I haven’t decided yet — so as to set straight the record they have tried to contort."

In an email to House Republicans the day after Sullivan's allegations surfaced, Bonnen disputed Sullivan's version of events.

Sullivan, whose organization has been loudly critical of the House most of this year, also said he met this week with Texas GOP Chair James Dickey to disclose he recorded the meeting and to encourage the party leader "to take action cleaning up the GOP's messy House." A spokesperson for Dickey confirmed to the Tribune on Wednesday that Dickey met with Sullivan before heading out of town for a political meeting.

Since Sullivan first lobbed his allegations last Thursday, House Republicans have grappled with how to handle it. Some were skeptical; Sullivan and his group have built a reputation for using sometimes controversial tactics to help carry out their agenda — both on the campaign trail and inside the state Capitol.

Others, meanwhile, have privately grown frustrated with how the speaker's office has responded to the allegations — and how Burrows, especially as caucus chair, has remained silent. Earlier this week, one House Republican, Ernest Bailes of Shepherd, formally requested that Burrows weigh in on the matter.

"The deft silence only solidifies truth within the allegations," Bailes wrote to his caucus in an email, which the Tribune obtained.