'I prayed every day I would get out': Woman who spent 475 days behind bars due to overlooked evidence released 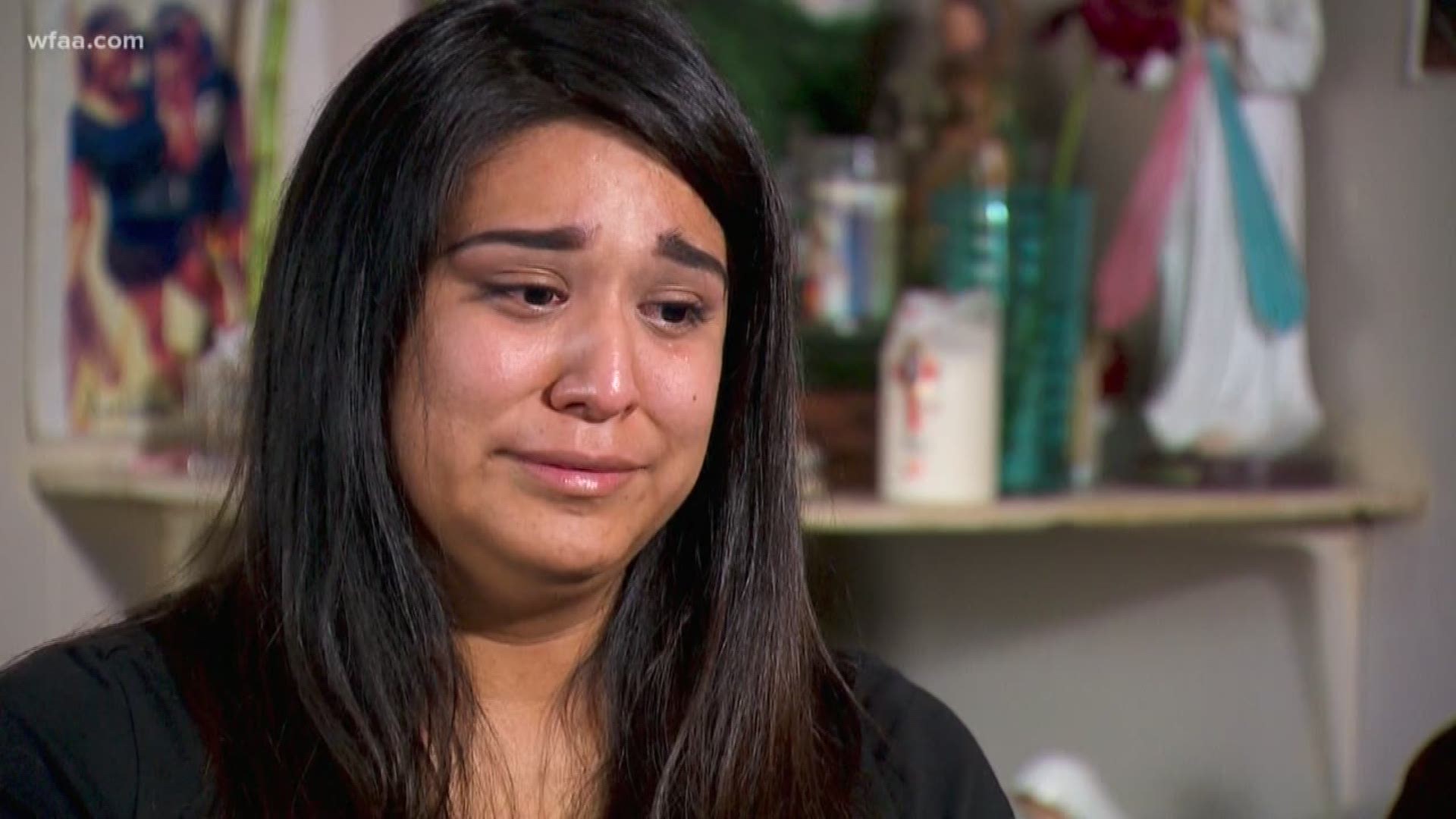 On January 26, 2018, Fierro, 21-year-old Teresa Mendoza, and 22-year-old Sam Rodriguez were involved in a car crash along the LBJ Expressway in North Dallas.

Mendoza was killed in the crash, and Fierro was charged with intoxication manslaughter and intoxication assault. Rodriguez was injured but survived.

Prosecutors alleged that Fierro was behind the wheel when the crash happened, based on the eyewitness testimony of a woman who said she helped pull Fierro from the wreck.

Yet, Fierro and her family have always maintained that she was never driving the car.

"I was just alone. No one supported me but my family," Fierro said after being released from custody Monday.

Fierro was put on trial for her intoxication manslaughter charge in December of last year.

However, it resulted in a mistrial, with 10 jurors voting for acquittal and two for conviction. 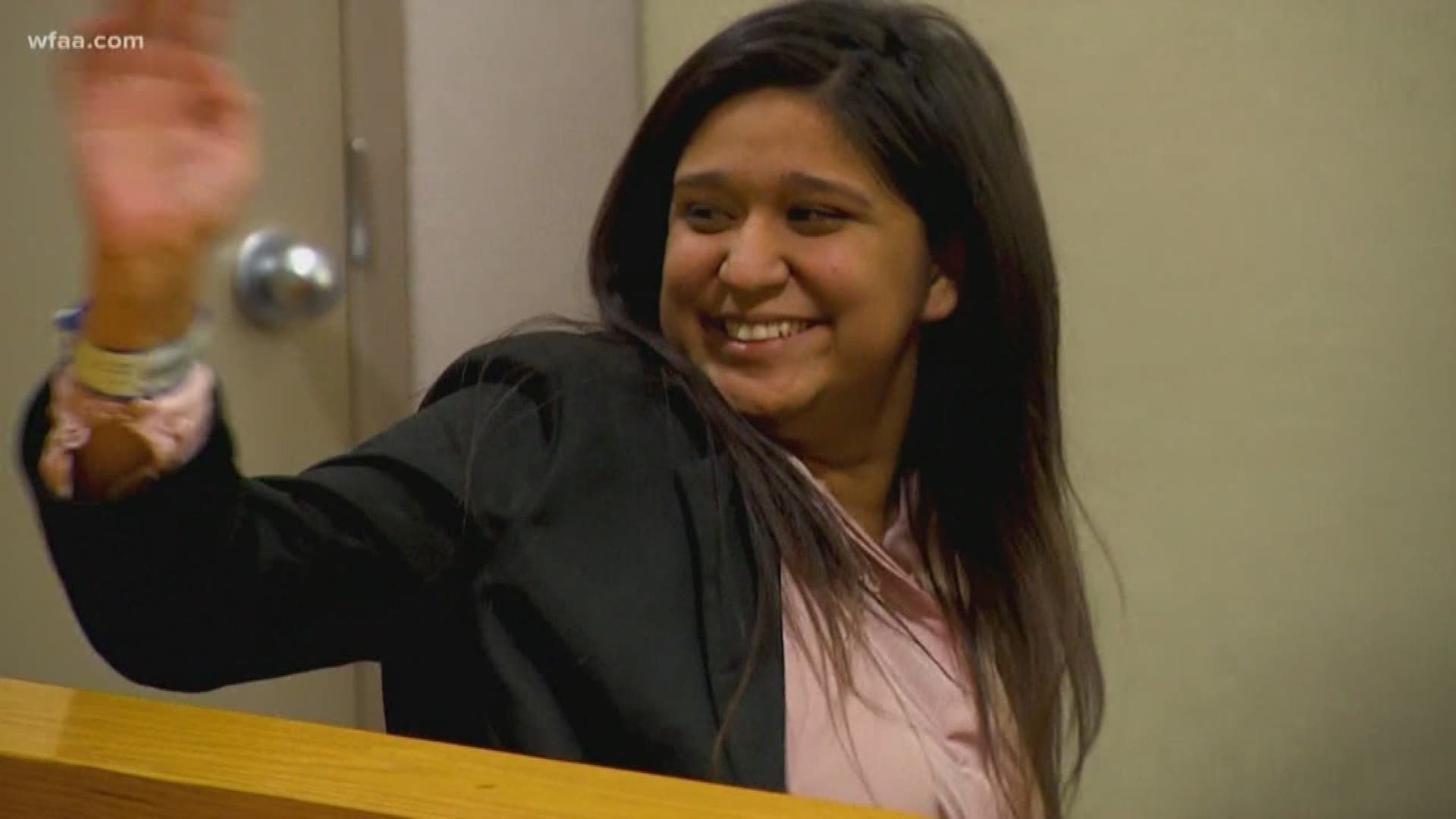 In both trials, Fierro's attorneys told WFAA that the only issue contested was the operator of the vehicle.

And Fierro's attorneys had several issues with claims the state was making.

There was a blood stain left in the driver's seat of the car, and per court filings, the state never had it DNA tested.

Fierro's attorneys argued that she never received an open wound during the wreck and that a simple test of the blood would show she wasn't sitting in the driver's seat.

But what is possibly the most eye-opening is what was found in hundreds of pages of medical records connected to the crash.

In those records, a nurse at the hospital said she overheard Rodriguez (who owned the car) talking to his mother about the crash on the phone and how he was driving.

She even took note and put it in his file which said:

"Patient talking to mother on phone, concerned about girlfriend who was a passenger in the car. It is now learned that patient was an unrestrained driver."

That medical note raises questions about the credibility of the eyewitness, Fierro's attorneys argued.

They even said in a court filing that the Dallas District Attorney's Office overlooked this evidence and didn't it point out to the defense, saying prosecutors "dumped a confession in voluminous medical records, sending the Defense on a search for a needle in a haystack without knowing they were looking for a needle."

Another interesting fact: A court filing said that prosecutor Katheryn Suggs tried to prevent Fierro's attorneys from "entering the statement into evidence at the second trial, while also failing to identify the exculpatory statement as required."

However, the filing said that Suggs eventually dropped her objection and the case was dismissed mid-trial.

One of the reasons Fierro was never released from custody is because she's an undocumented immigrant.

ICE maintained a hold on her while incarcerated, even though she could afford bail from the Dallas County lockup.

After her charges were dismissed, Fierro's family paid a $5,000 bail to remove her from a federal detention facility in Alvarado.

Her first moments as a free woman were captured by her family on video.

Fierro can be seen giving an emotional hug to her father.

"He's just been through so much," Fierro said. "I thanked him for not leaving my side, for not leaving me alone, for being there for me, and for believing in me like no one else believed in me."

Fierro told WFAA from her family's home that she remains devastated by the night she lost her best friend.

"We were like sisters," Fierro said while sobbing. "I miss her, and I still can't believe she's dead."

When asked how she felt about her time behind bars, Fierro didn't hesitate to speak.

"Not having anyone there with you, it's hard," Fierro said. "I prayed every day that I would get out soon, and I did because I was innocent like I said."

WFAA asked the Dallas District Attorney's Office if it would pursue charges against Rodriguez now.

A spokesperson was unable to give WFAA an answer Monday night before the deadline of this story, but Fierro is hoping that happens.

Fierro added that she may even consider litigation against the county for wrongfully accusing her and keeping her behind bars.

"It's an injustice. You can't do that to someone. It's not fair what they did to me."

Fierro said she will have an immigration court date within the next two years.

She added that she will likely apply for a DACA protection or attempt to receive U.S. citizenship.