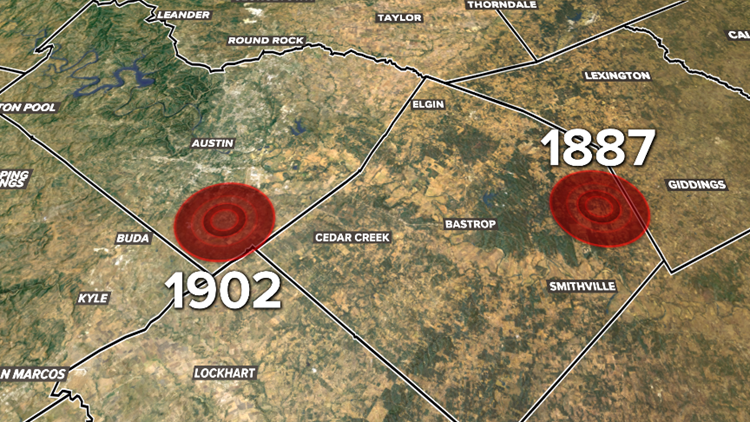 133 years ago this week, an earthquake shook the Austin area

AUSTIN, Texas — With the recent string of earthquakes being reported in Puerto Rico this week, KVUE viewer Cindy asked if fault lines in Central Texas could be active soon. In short: no. But earthquakes have happened in recorded history.

A book called "Texas Earthquakes" by Cliff Frohlich and Scott D. Davis provides excellent information on two earthquakes that occurred in the Austin area. One occurred 133 years ago this week on Jan. 5, 1887. That earthquake is estimated to have been around a magnitude 4.0 and was reported in eastern Bastrop County near the community of Paige. The quake was felt as far away as Austin and in nearby Bastrop, Elgin and Giddings. No damage or injuries were reported.

The second earthquake was felt more strongly in Austin on Oct. 9, 1902. The epicenter of the estimated magnitude 4.0 earthquake was in southern Travis County near the community of Creedmoor. In "Texas Earthquakes," Frohlich and Davis provide a report published in the "Austin Daily Statesman" of some people thinking Round Mountain or Pilot Knob were "in a state of eruption" as they were on the lookout for molten lava.

The San Antonio Express reported that a farmer in Cedar Creek thought perhaps the shaking was caused by a meteor hitting Pilot Knob.

Frohlich and Davis mention that the 1887 and 1902 quake can't be blamed on petroleum production or exploration since oil was not discovered in this part of Texas until 1912. Instead, a series of faults are likely the culprit.

The Ouachita Belt stretches from Arkansas and Oklahoma, southward into Texas and Mexico. The series of faults that make up the Ouachita are the Mexia-Talco, the Balcones, the Charlotte-Jourdanton and the Luling, Frohlich and Davis wrote.

The 1902 earthquake in southern Travis County was likely associated with the Balcones Fault, while the 1887 quake in Bastrop County was most likely linked to the Mexia-Talco system, according to Frohlich and Davis. None of the local faults are very active right now and will likely remain inactive. About 10 million years ago though, the Balcones Fault was very active.

So, other than a rare and small shake, South-Central Texans can rest easy from the threat of damaging earthquakes.

If you would like more information about the history of earthquakes in the Lone Star State, pick up the University of Texas Press' "Texas Earthquakes" by Cliff Frohlich and Scott D Davis, ISBN: 0-292-72551-5.