Her bank account was drained of $2K in 30 minutes; BB&T warns about bank scam text

The fraudulent alert text appeared to be coming from BB&T, but Candice Terrell later saw that her bank account had been drained of more than $2,000. 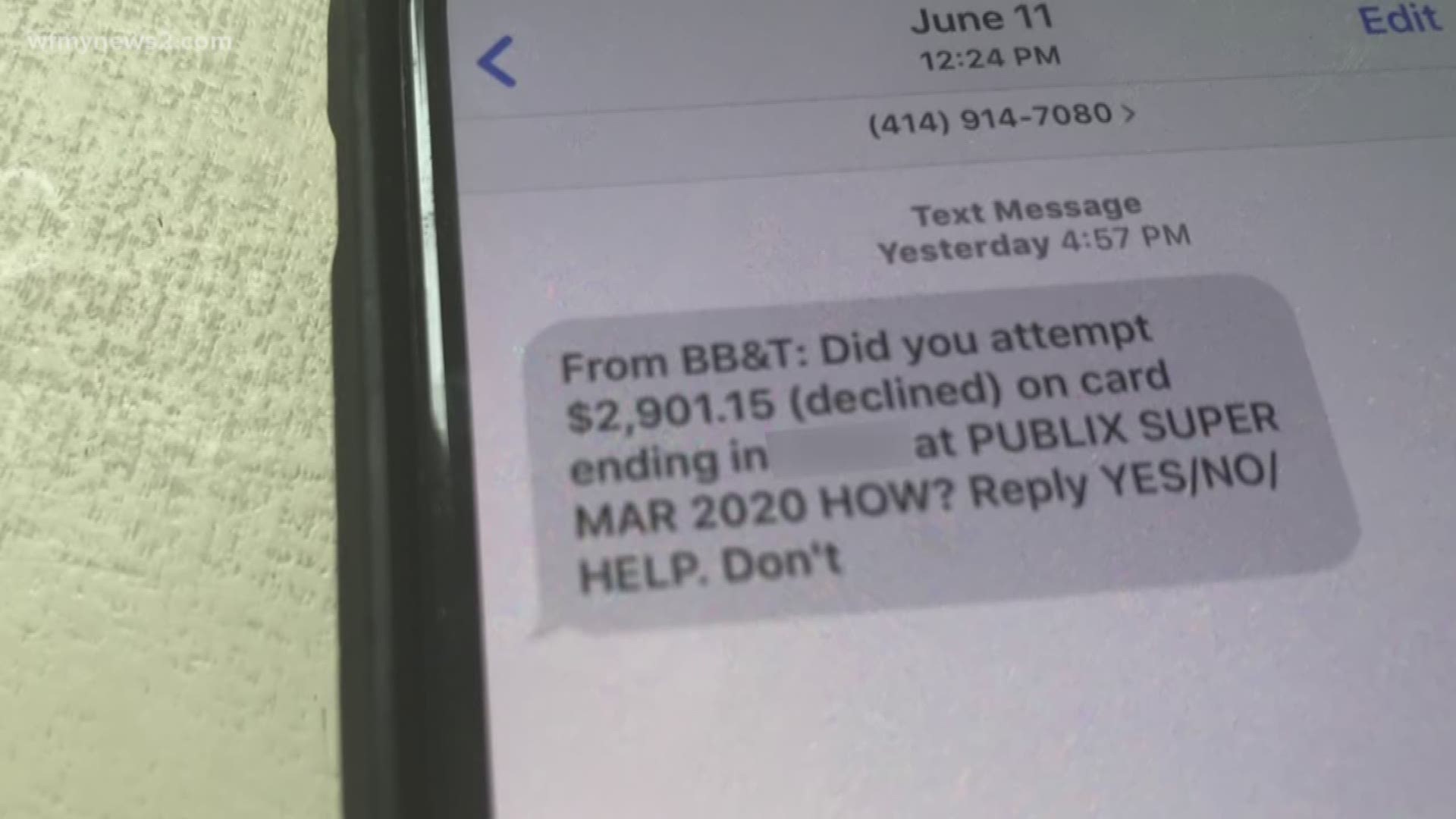 GREENSBORO, N.C. — Candice Terrell was just about to go on vacation when she received a text. The message appeared to be a notification from her bank that there may be some fraudulent activity on her debit card.

“It was basically a question asking if I spent like $2,900 at a Publix,” said Terrell.

She immediately texted “No” and within minutes her phone rang. The person on the other end of the phone identified himself as “Kevin from BB&T” and was here to help. He told Terrell that it appeared someone was trying to use her card at a Publix, but that BB&T caught it and the card would be frozen.

“I was glad he was helping,” said Terrell.

As Kevin was asking her a series of questions Terrell was not completely convinced Kevin was from BB&T.

“I said Kevin I hope you don’t take this personally but how do I know you’re with BB&T,” said Terrell.

He told her not to worry and she must be careful of scam calls. He then told her to Google the phone number for BB&T so she could confirm he is calling from the bank. Terrell Googled the number and it came back as the main number for BB&T.

“He then told me he was here to help, and everything would be okay, and my money would not be stolen,” said Terrell.

He then told Terrell she would be transferred to a different line where she would key in her PIN number to freeze that account and then he would come back on the line to set up the new account. Once Terrell punched in that PIN number “Kevin” had access to her account and started to steal her money.

“He transferred money from my savings account into my checking account and started buying stuff,” said Terrell.

At some point during the conversation with “Kevin," BB&T noticed the fraud taking place and contacted Terrell about the strange activity on her card. The bank noticing more than $2,000 worth of items were being purchased at a Publix in Florida.

“They (BB&T) sent me an alert but I didn’t notice it because my phone was blowing up,” said Terrell.

Those emails and text messages that Terrell was getting from random emails and phone numbers was a distraction, so Terrell wouldn’t see the alert BB&T sent her.

"I received more than 150 messages in like 20 minutes, now I know why,” said Terrell.

In fact, Terrell hung up the phone thinking her account was safe and the money was still in it. The next morning, she saw a new text from BB&T that her account was overdrawn. She called BB&T and quickly learned she had been scammed. She immediately went to her local branch.

"The lady (clerk) told me I was the fourth person in already today that had been scammed and it was just 10 am,” said Terrell.

The scam is not new, but it appears whoever is doing this is targeting BB&T customers. BB&T would not confirm how many people have been victimized due to privacy concerns but did say it is working with customers affected.

A spokesperson for the bank told us in an email, “The safety and security of our client’s personal and financial information is a top priority for BB&T, and we are strongly committed to the protection of our clients’ information and financial assets,” said Vice President of Corporate Communications David White.

BB&T is looking at each case individually to determine if the customers will be reimbursed and told us it sent out a scam alert to customers in mid-May warning them about this scheme.

BB&T also told us that while it will text customers about potentially fraudulent activity, it won’t ask customers to verify their one-time passcode, PIN, password or online banking credentials in an unsolicited phone call or text.

Experts warn customers of any bank or company with phone numbers that can be “spoofed." In other words, it may look like a certain business is calling you, but that may not be the case. The only way to be sure is to go to a phone number that appears on your billing statement and call that number.

Terrell has been told all her money will be reimbursed which was good news just days before boarding a plane for vacation.

RELATED: Prisoner Runs A Large-Scale Phone Scam From Behind Bars

RELATED: 7 ways to protect yourself from bad contractors

RELATED: Watch Out For This Scam As The Weather Warms Up

RELATED: FCC warns of 'One Ring' call back scam