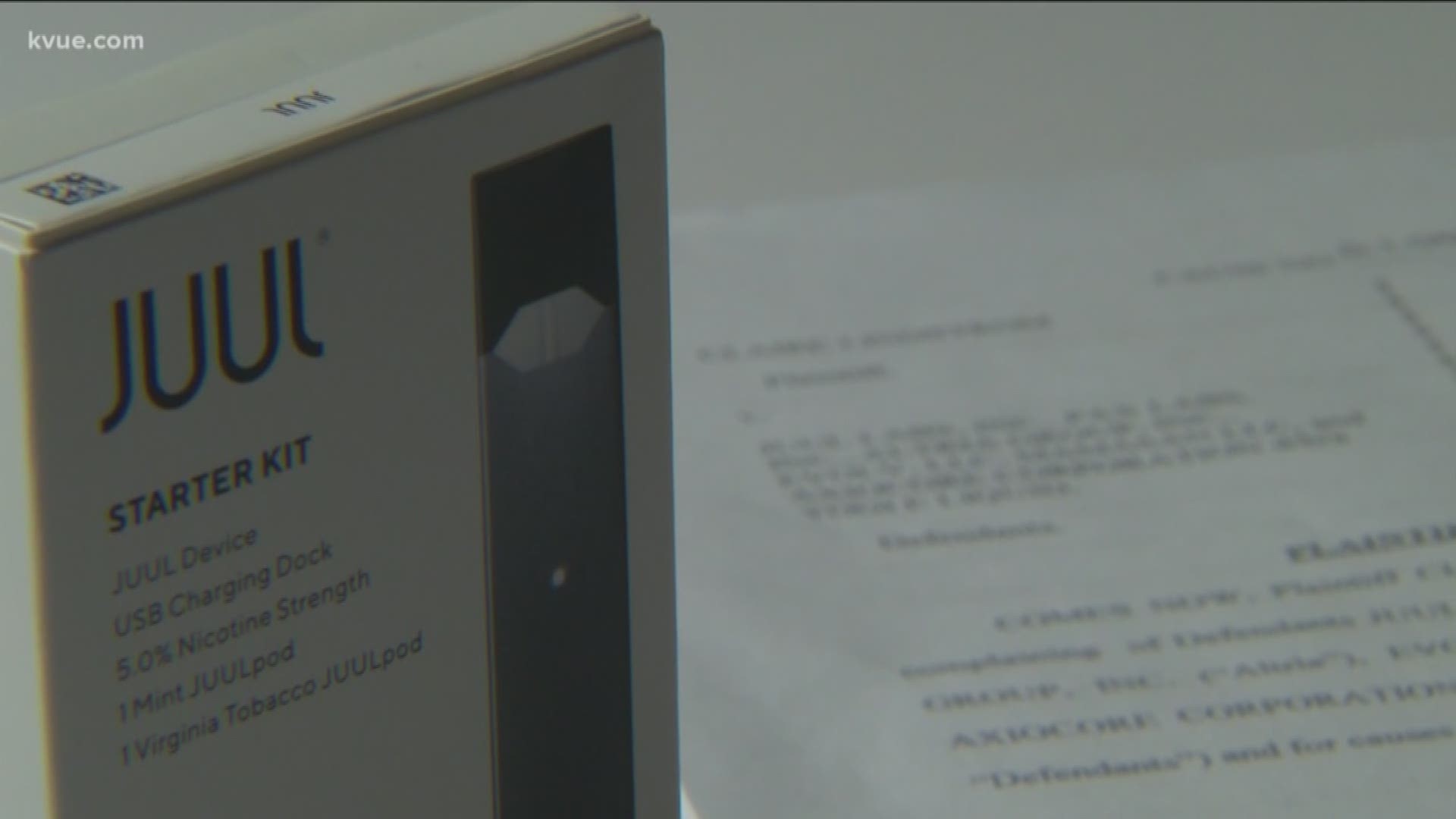 TRAVIS COUNTY, Texas — A woman filed a lawsuit on Monday against seven vaping companies after she claimed their vaping products caused her to become so sick that, at one point, she became unconscious.

"Plaintiff's claims are based on injuries she received from electronic cigarettes ('vapes') and their subsequent component parts which are owned, operated and marketed by defendants," according to a lawsuit obtained by KVUE on Dec. 19.

The lawsuit stated the woman started vaping in March of 2018 while she was a resident in Travis County and "quickly became addicted to the high levels of nicotine" in the defendants' products. The lawsuit added that she was enticed specifically by Juul's advertisements.

The lawsuit alleges that within three weeks of using those products, she developed bronchitis and stopped vaping for a few weeks. However, she began vaping again in August because of the "addictive nature" of the vaping products, the lawsuit stated.

On Sept. 1, the woman reportedly started "feeling lethargic and coughing incessantly." The lawsuit alleged that at one point, she even started vomiting.

A couple of days later on Sept. 3, the woman's roommate found her unconscious in her bed, according to the lawsuit.

When the woman finally woke up, the lawsuit alleged she was hardly able to walk and was taken to a hospital where she was diagnosed with lipoid pneumonia.

According to the lawsuit, doctors feared the woman had permanent damage to her lungs due to vaping.

The woman is reportedly still receiving treatment for her injuries and has since quit vaping, the lawsuit stated.

David Wenholz, one of the attorneys behind the suit, said: "Clearly Claire’s health is the primary concern, but I think the secondary concern is we need to stop the way these products are marketed and look very carefully at how they are being sold to people in our area."

He said one of the goals of the lawsuit is to "expose the misleading marketing efforts" companies use.

"It’s geared towards young adults, high school and middle-aged kids. Even though tobacco is not involved, nicotine is. And what we’re learning is e-cigarettes, which are touted as being safer than cigarettes, tobacco cigarettes, actually in many instances have two, three, four, five times as much nicotine," said Wenholz. "And if you look at the research that’s been done by the national institutes of health, there’s wide consensus that use of high nicotine levels in developing brains affects everything from memory, creative ability and other portions of our ability to function."

He said they hope to shine a light on the marketing efforts used by the companies.

KVUE has reached out to Juul, Pax, Altria Group, Evolv and Yogi for a comment regarding this lawsuit. KVUE could not find contact information for Mamasan or Axiocore. This story will be updated when KVUE receives responses.