Clearing the Air: Is Juul to blame for the nation's vaping epidemic? 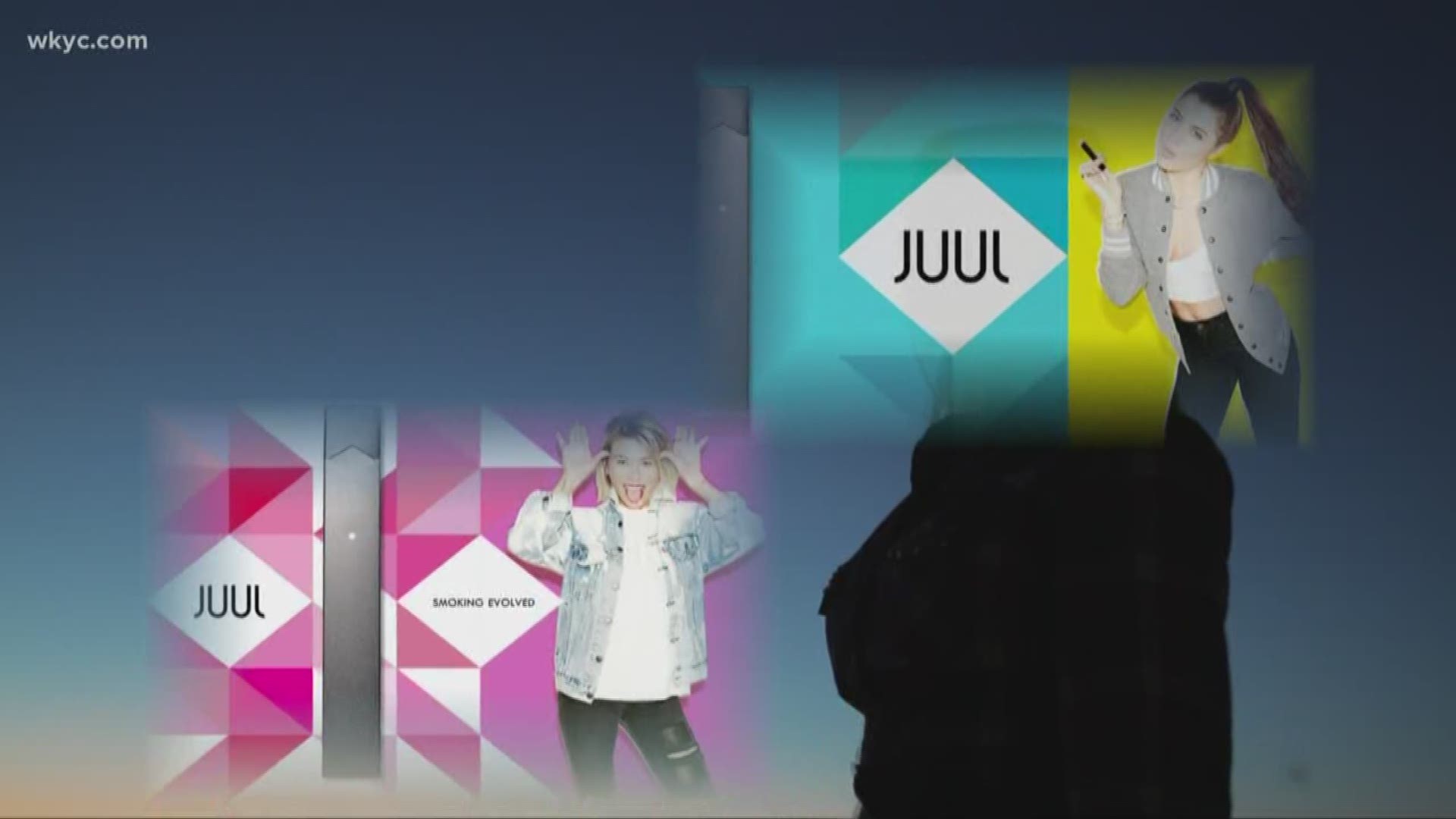 An alarming number of teens are using e-cigarettes and many blame this surge on one company that aggressively targeted teens with slick ads and false safety claims.

In part two of our “Clearing The Air” series, 3 News Investigator Rachel Polansky collected internal e-mails, exposing the marketing campaign that put profits ahead of studies that suggest vaping harms the lungs of children.

Click here to read Part 1 in our series: As vaping concerns rise, so does its use in schools.

These innocent-looking devices that look like USB drives have become the face of e-cigarettes.

“A lot of people call the bathroom 'the Juul room,' said Kylee Zingale, a seventh grader in Lakewood. So much so that kids have turned the brand name, Juul, into its own verb.

“Because that’s where most high schoolers go to go Juul during class,” Zingale said.

In at least one instance, Juul reps told students that their product was "totally safe" and "even demonstrated to the kids how to use a Juul."

A congressional subcommittee investigating Juul characterized the marketing plan as a "sophisticated program" that "targeted teenagers and children, as young as eight years old."

According to the CDC, one in four high school students are using e-cigarettes.

“It was more like everybody else is doing it. I want to see what it’s like,” said 20-year-old Jansen Miller. “I feel like for a lot of people out there, that’s kind of how it starts.”

Miller wasn’t a Juul user but he admits that he vaped nicotine products as well as products containing THC.

Now, he’s believed to be among the 49 confirmed vaping-related illness cases in Ohio.

“We were interested in looking at adolescents because we know e-cigarette users are predominantly adolescents,” said Dr. Wold, who is also the Director of biomedical research at The Ohio State University.

Dr. Wold is studying the impact of vaping by testing young mice, giving them a puff of pure vape juice every minute for four hours per day, five days per week.

“We expose them just like a traditional e-cigarette user would be exposed,” Dr. Wold said. “After two months of testing, we’re seeing early incidence of heart dysfunction, that is very similar to what’s seen in patients with diabetes, for example.”

Dr. Wold is also testing adult mice, giving them a puff of pure vape juice every minute for four hours per day, five days per week, and he’s not seeing the same effects.

“Five months of exposure in the adult mice caused no change in cardiac function,” said Dr. Wold. “It was completely surprising.”

When we asked him why he thinks he’s seeing different results in adolescent mice versus adult mice, he explained, “I think one major issue is development. The lungs and the hearts are still developing in these animal models."

A Juul spokesperson issued the following statement to 3 News:

“We never designed our marketing to appeal to youth and do not want any non-nicotine users to try our products as they exist to help adult smokers find an alternative to combustible cigarettes. We need to urgently address underage use of vapor products and earn the trust of regulators, policymakers and other stakeholders. That is why we are focusing on taking aggressive actions to reduce youth usage of our products, working through the FDA's PMTA process and supporting and complying with FDA’s final guidance on flavored products once effective,” said a Juul Labs spokesperson. “Most recently, we suspended all broadcast, print and digital product advertising in the U.S. as part of a broad review of the company’s practices and policies to ensure alignment with its aim of responsible leadership within the industry.“

The Juul spokesperson went on to say that Juul “strongly advocate(s) for Tobacco 21 legislation, stopped the sale of non-tobacco and non-menthol based flavored JUULpods to our traditional retail store partners, enhanced our online age-verification process, strengthened our retailer compliance program with over 2,000 secret shopper visits per month, and shut down our Facebook and Instagram accounts while working constantly to remove inappropriate social media content generated by others on those platforms.”

Following the first part of our "Clearing the Air" series, the Ohio Department of Education released the following statement:

“As shown by the results of the survey of districts made by 10TV, WKYC and WTOL, individual schools and school districts have the capability to precisely understand the prevalence of student vaping incidents in their schools. Some districts, in fact, have made decisions to take action such as by better informing students of the risks of vaping and installing vape detector devices. The Ohio Department of Education is happy to collaborate to gain a better statewide understanding of the prevalence of vaping in schools. We are talking with districts about the feasibility and reliability of collecting current year data about the number of vaping incidents occurring in Ohio schools through a non-routine process. We are also exploring longer term more routine data collection options.”

But is that new law being enforced?

The 3 News Investigators went undercover with a hidden camera to vape shops and gas stations in Northeast Ohio to find out if clerks were actively IDing those who tried buying e-cigarettes. We’ll have that part of the story Wednesday at 6 p.m. on What Matters Most.

RELATED: Vaping-related illnesses in US still rising, but more slowly