According to a Texas Medical Association survey, 24% of people say insurance companies denied treatments, drugs and other orders given by doctors. 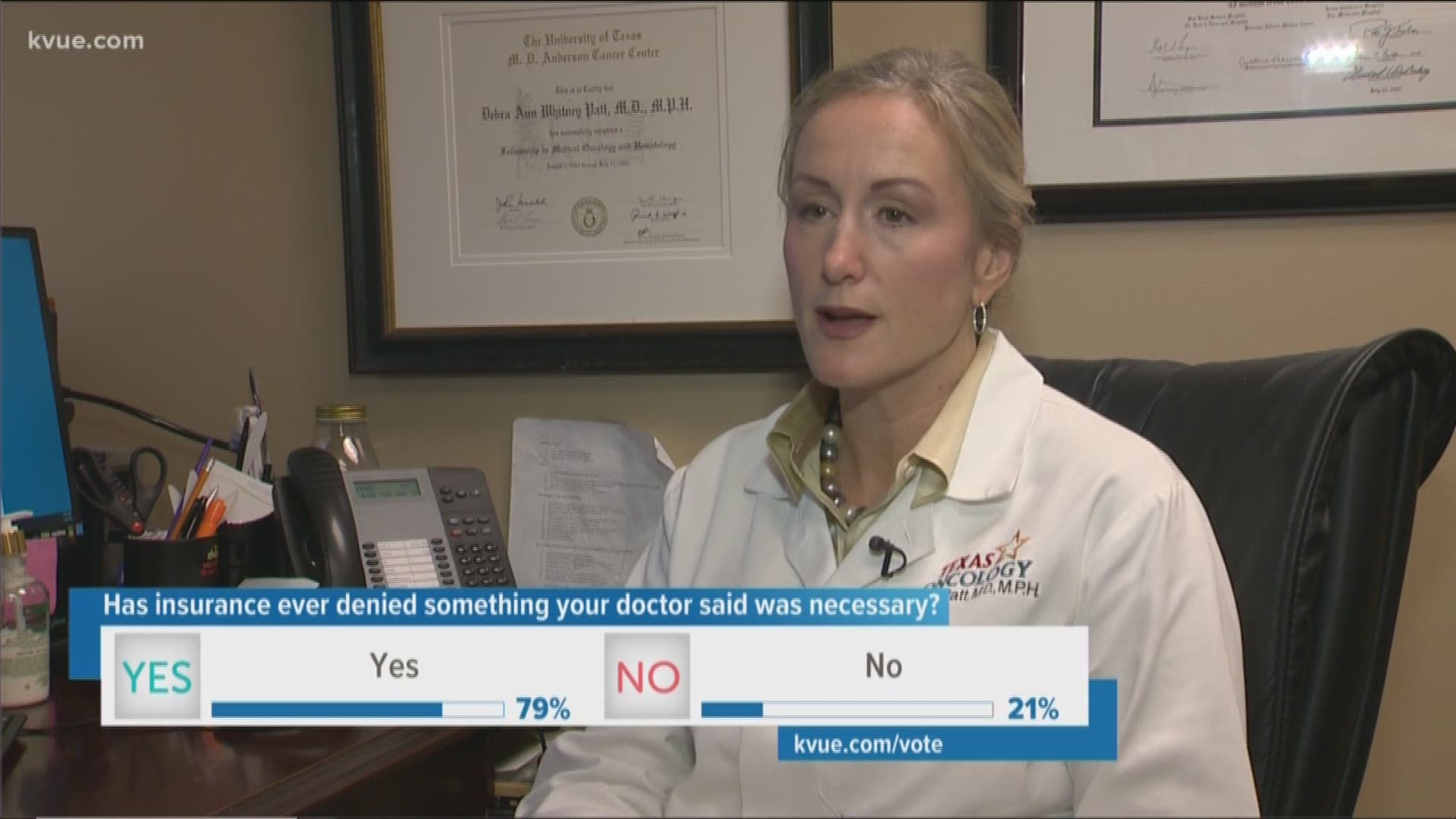 AUSTIN, Texas — In January, the Texas Medical Association asked 800 people if their doctors' orders were denied by insurance companies – 24% of those people said yes.

Jennifer Lomax and Leah Billingsley beat breast cancer once before. Now in 2020, they are facing cancer again. Lomax's cancer moved from her breast to her brain. Billingsley's returned visibly as a rash down her side.

"I could just tell from the look on [my nurse practitioner's] face that it was probably not good," Billingsley said. "She went and got Dr. Patt, who was seeing somebody else at the time, but Dr. Patt popped in and she looked at it and was like, ‘You need to get a biopsy of that right now.’”

At the beginning of January, the cancer looked like the size of a half-dollar coin on her side. By the time she got the PET scan she needed, it had spread half of the way down to her waist.

"‘Well, we haven’t heard anything from your insurance yet; we haven’t gotten the approval,'" Billingsley recalled of the conversation with her oncologist's office.

Billingsley's insurance, Blue Cross Blue Shield of Texas, denied her scan, citing there was not enough evidence to justify the PET scan. Instead, according to Billingsley, they offered to cover a CT scan with contrast-eye and a total bone scan. Billingsley believes those scans are close, but would not reveal the same results as a PET scan.

"I was a little bit aggravated that what they had approved was something different," Billingsley said.

She ended up paying for the PET scan herself, spending $1,773.

Jennifer Lomax's breast cancer metastasized to her brain in January, but disappeared from her breast in Oct. 2019. She found a lump on her neck days before going in for a routine check-up at Texas Oncology.

“I wasn’t even looking for a lump!" Lomax said. "I don’t even know how I found it. I just happened to go like this and I’m like, ‘Wait a minute.’”

Lomax's oncologist, Dr. Debra Patt, ordered her to be on a particular drug to help with chemotherapy. At first, Lomax's insurance denied it.

Lomax's insurance gave prior approval to use the drug Thursday. Her cancer spread to her brain weeks ago. She started radiation treatment almost immediately.

Patt says she has to fight with prior authorization policies regularly.

"In my time practicing in Texas, 13 years, I used to be able to give chemo in a day or two," Patt, the executive vice president of Texas Oncology, said. "Now, I have to wait longer than a week because it takes so long to have chemo approved even for common cancers."

Patt argues that the time it takes to approve a drug or treatment or something she orders for a patient means their health issue can get worse before medical professionals can address it.

"Sometimes there's a very narrow window by which treatments are approved, so that's part of the prior authorization process," Patt said. "What I think you'll see more and more is that this is growing. Clearly, it's a problem for Texans."

The Texas Medical Association, who suggested KVUE talk with Dr. Patt about the issue, found in a survey of those people whose insurance denied their doctor's orders, 30% paid for the order themselves and 10% of those who had doctor's orders denied said their or their family member's condition got worse.

Insurance companies KVUE reached out to all recommended to talk with the Texas Association of Health Plans for a response. TAHP said in a statement:

"Texas health plans are dedicated to providing their members with access to safe, effective and affordable health care. Most doctors believe at least 15-30% of all ordered medical care is unnecessary or unsafe, and we can’t forget that the opioid crisis was driven by unsafe prescriptions. When it comes to ensuring that patients receive safe and effective care, Texas has some of the strongest protections in the country, including prior authorization by health plans, exemption from prior authorization in emergencies and the ability to appeal decisions to an independent doctor."