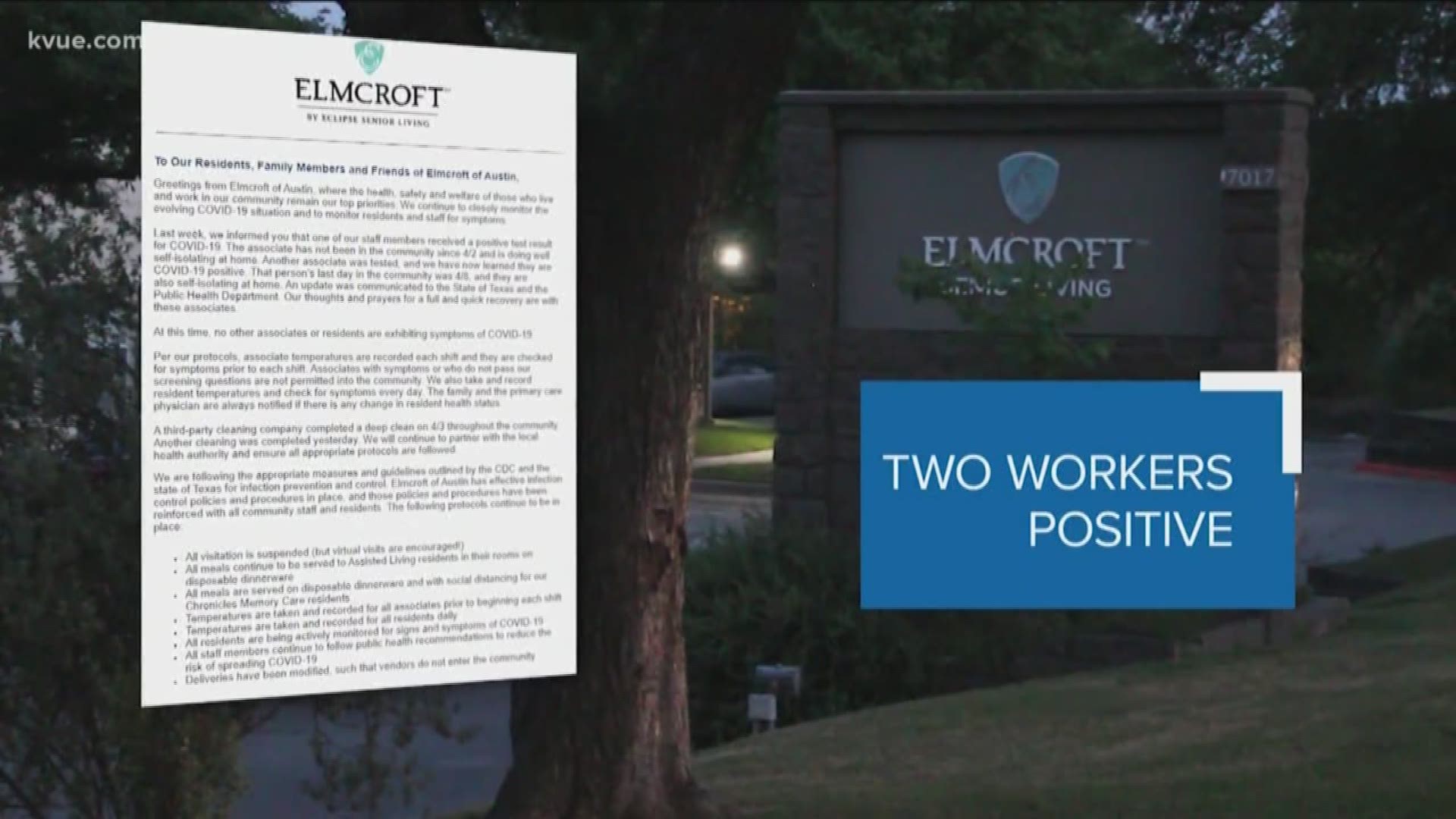 AUSTIN, Texas — City of Austin leaders announced Tuesday that one nursing home in Travis County has 12 residents and a worker who have died from COVID-19.

Local and State leaders still refuse to disclose the names of facilities with confirmed cases of the virus, but now lawmakers and family members are pushing for the State to do more.

"I would love for the State to say, 'Hey, we're going to be testing everybody, making sure there are deep cleans taking place with all the facilities,'" Rietta McKnight said.

According to emails sent to families, workers there have tested positive for the virus.

"They're at such a high risk of becoming infected and obviously dying because of that," McKnight said. "So, to me, that's vital."

No one from Elmcroft has responded to KVUE's request for comment.

But earlier Tuesday, Austin Public Health (APH) confirmed there are 13 facilities in Travis County with a COVID-19 cluster. There are at least 280 confirmed cases of the virus, and 27 people have died.

One facility has 76 cases, according to APH. That includes the deaths of 12 residents and one worker.

The City won't say which nursing home that is, but KVUE learned last week that a worker died at West Oaks Nursing and Rehabilitation Center. A spokesperson from West Oaks would not confirm the number of cases currently inside that facility.

"As of today, our nursing homes are not ready to reopen Texas," Rep. Gina Hinojosa (District 49) said.

Hinojosa also said the State should be more transparent about information regarding nursing homes with COVID-19.

"I think the more transparency we have about this, the more confident people can feel about what our state's response is, what our local response is," Hinojosa said.

“This pandemic has exposed the neglect of our state’s most vulnerable populations, in particular our long-term care facilities,” said Talarico.  “For years, our state has failed to prioritize elderly Texans and Texans with disabilities. Now these facilities are the epicenters of the pandemic. We must protect our most vulnerable neighbors. This is a moral moment for our state.”

City and State officials cite personal health privacy laws as the reason they won't tell people which nursing homes have cases of the coronavirus.

On Tuesday, KVUE Political Anchor Ashley Goudeau asked Gov. Abbott to weigh in on the State's refusal to release records of nursing home facilities with cases of the virus.

"I would need to talk to the folks at DSHS to find out why they are not releasing that information," Abbott said.

Lawmakers and families are hoping more transparency comes soon. And McKnight hopes everyone in these homes is tested more than once.

"I would say every two weeks or so," McKnight said. "You know, I'm dreaming of the perfect scenario here. That's the only way we can be sure everything is okay."

The Texas Health and Human Services Commission sent a letter to the Attorney General's Office on Monday arguing they should not have to release nursing home facility names.