Teresa Mata, a mother of four daughters, said she got the vaccine to protect her family at home and her work family, according to the hospital. 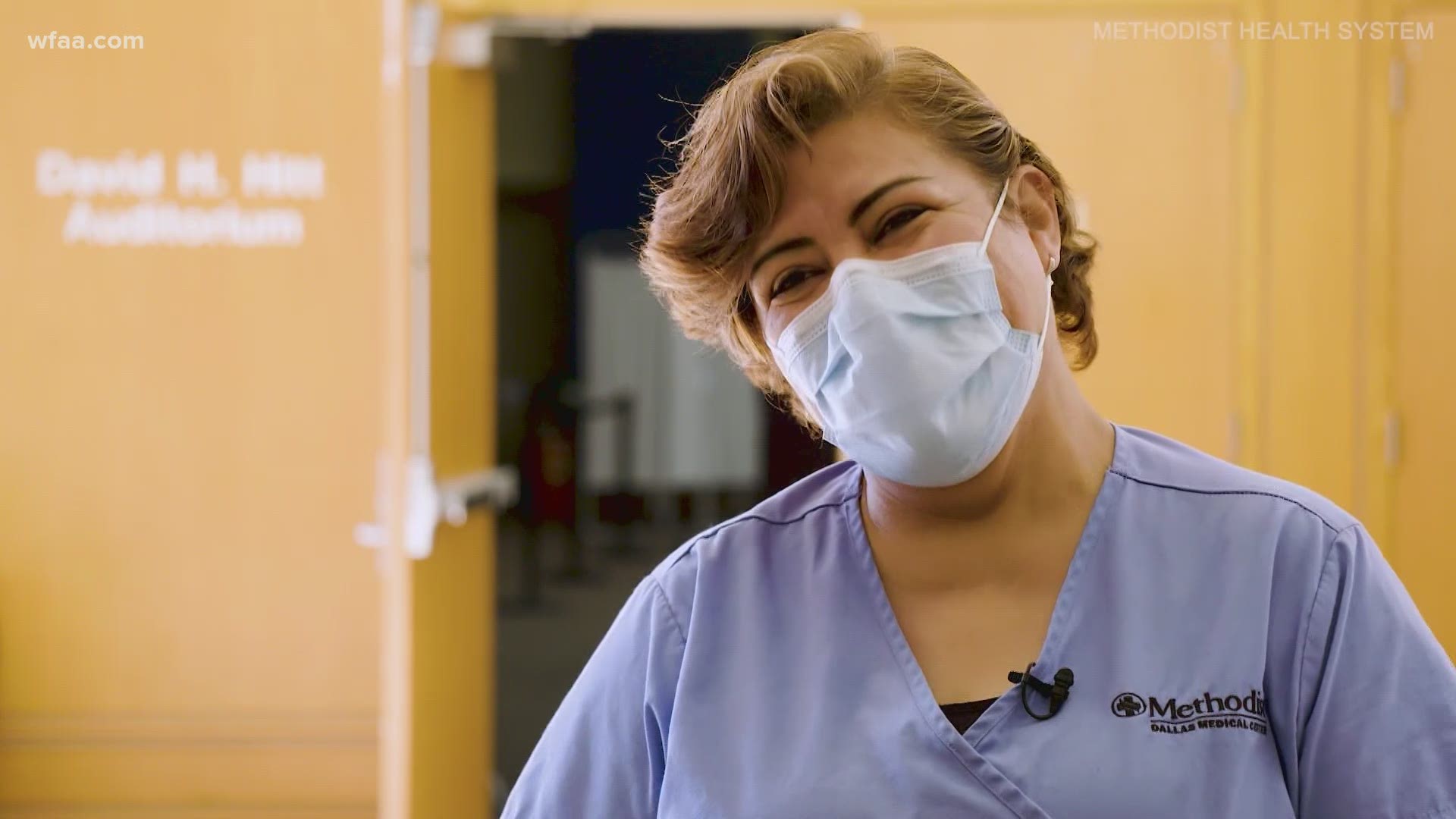 This article will be updated throughout the day as new information is released.

An environment services worker who cleans the emergency room at Methodist Dallas Medical Center was the first person to receive Pfizer's COVID-19 vaccine on Monday.

The hospital received 5,850 dosages in its first shipment Monday morning.

Methodist Dallas Medical Center is one of four hospitals in Texas that received shipments Monday, but the only one to administer the vaccine. The hospitals in Houston and Austin will begin vaccinating Tuesday and the one in San Antonio will on Wednesday, according to officials from each facility.

Teresa Mata, 51, was the first employee to be immunized in Dallas and in Texas. The mother of four daughters said she got the vaccine to protect her family at home and at work, the hospital said in a release. 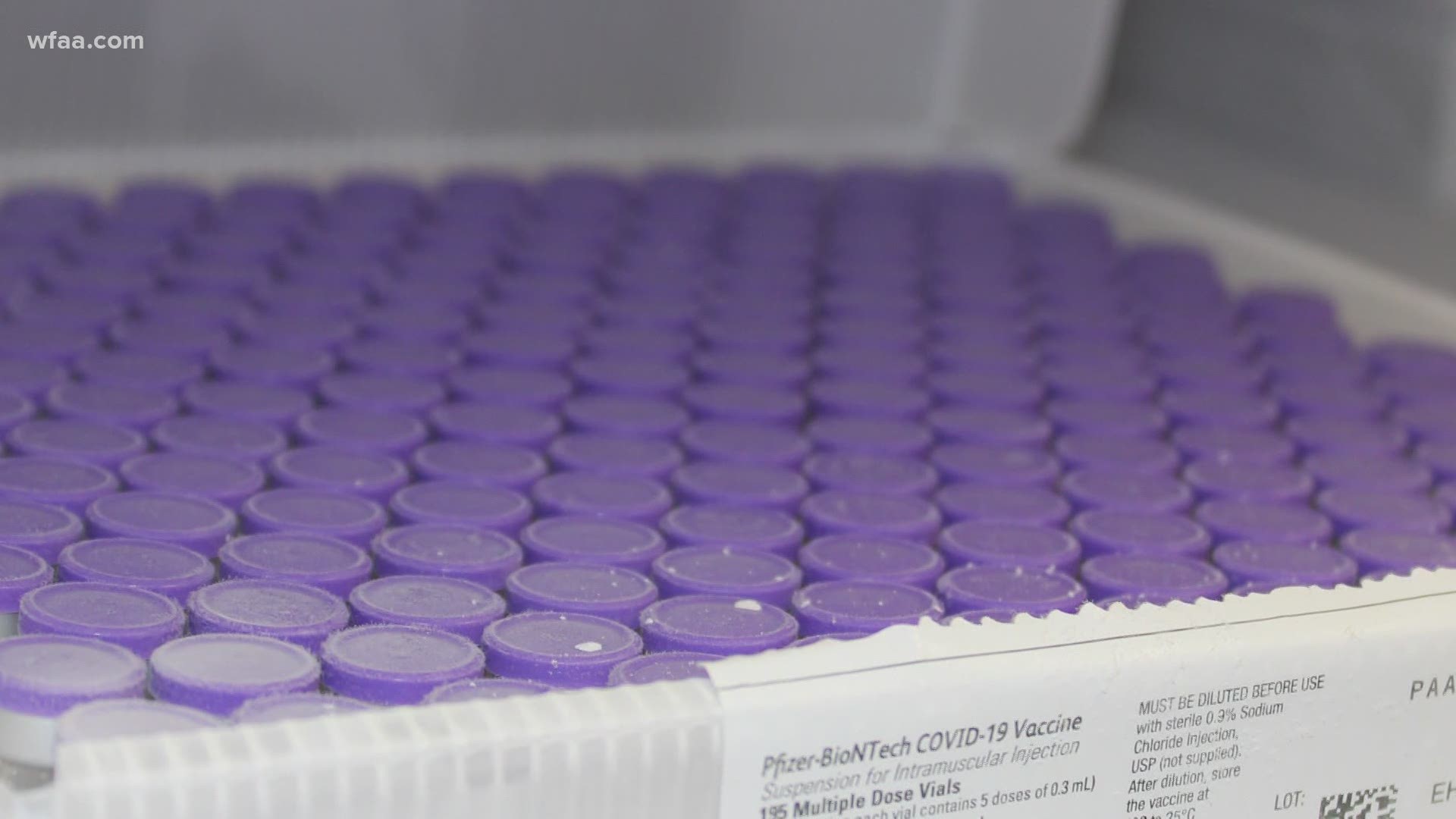 Physicians, nurses, non-clinical staff, and ER staff will be among the first group to receive the vaccine, officials said.

Recipients registered ahead of time to receive the vaccine and also filled out consent forms and paperwork, according to officials.

Methodist Dallas said there are nurses who have already been trained on how to give the shot. Recipients will be held for 10 to 15 minutes afterwards to make sure they don’t suffer any immediate side effects.

Hospital officials said they would vaccinate more than 100 employee Monday.

The medical center said it hopes to administer all doses by the end of next week. They will get the next shipment and give the required second dosage three weeks from now.

The hospital said it will repeat this process until everyone is vaccinated.

State health officials said 19 more hospitals will get the shipments Tuesday including UT-Southwestern, Parkland Hospital, and Texas Health in Fort Worth.

The remaining 86 hospitals receiving the vaccine will get them over the course of the week, according to state health officials.

Altogether, 220,000 doses will be shipped in Texas in the next week, shipped directly from Pfizer by UPS and FedEx.

RELATED: Texas expected to receive over 220,000 doses of Pfizer vaccine in first week

Methodist Dallas said its staff will still follow CDC safety guidelines as it will take a while before 70 to 80% of the public is vaccinated, which is needed for herd immunity.

The vaccines have arrived at @methodistdallas and we are told the first recipients will arrive at 10am to begin paperwork.

Frontline workers getting the vaccine have signed up in time slots to receive it.#CovidVaccine #IAmUp https://t.co/fJDXaqADT6

"Is this room for optimism and excitement? It sure is and we should rejoice in this development but we shouldn’t let down our guard," said Dr. Mark Casanova, President of the Dallas County Medical Society.

Here are the facilities that will receive doses on Monday, according to the state:

Seniors who are residents of assisted living centers will also be eligible for the vaccine immediately.

Gov. Greg Abbott says the state will have 1.4 million doses by the end of the month, more than the 1.3 million people that have tested positive for coronavirus in Texas.