Texas mayors talk COVID-19 and economic impacts on their cities

Mayor Steve Adler joined five other Texas mayors to discuss the pandemic and the economic impacts of COVID-19 as part of The Texas Tribune Festival. 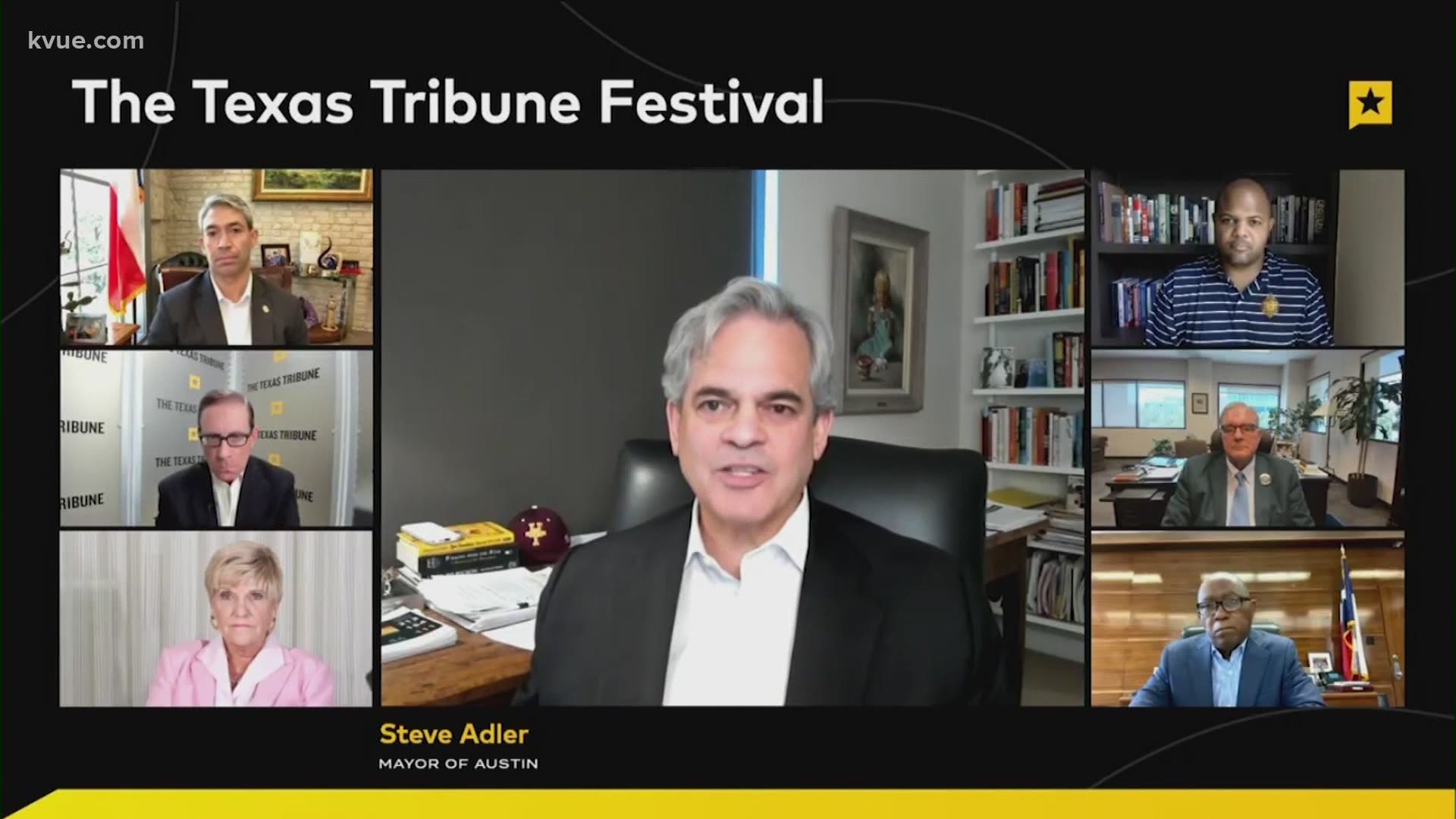 AUSTIN, Texas — Austin Mayor Steve Adler joined the mayors from Dallas, El Paso, Fort Worth, Houston and San Antonio to talk about COVID-19 and the economic impacts it had on their cities. This conversation was part of The Texas Tribune Festival, which runs through September.

"It's been like a rollercoaster ride," Houston Mayor Sylvester Turner said.

"I've learned from all of these mayors that are here, and we communicate on a regular basis," said Turner. "All of us are just trying to manage the situation until a vaccine comes online, but things are things are getting better."

Dallas Mayor Eric Johnson called COVID-19 a real challenge, saying every mayor on the conversation learned the hard way this virus is unpredictable. He said Dallas is about to cross the 900 deaths threshold.

"We were going through stages of reopening from 25% occupancy to 50% occupancy, opening different activities of businesses before we had the data to prove up whether the previous step had worked," said San Antonio Mayor Ron Nirenberg. "And that was what our public health professionals expressly told us not to do. You've got to get it under control, then you've got to open up methodically and prove up each step with data. We did not do that."

Nirenberg said when the State of Texas took over the reopening timelines, local governments could no longer control the timeline.

Fort Worth Mayor Betsy Price said it's always been a "local control issue" and said there has been a struggle with the State before.

"From my standpoint, local control is, 'Let us determine where we are first and foremost and let us go to the state if we need help or support,'" said El Paso Mayor Dee Margo.

The moderator, Evan Smith, CEO of The Texas Tribune, then called on Mayor Steve Adler.

Adler did want to give Gov. Abbott credit though.

"Among Republican governors, he was one of the very first to be urging everybody to wear masks, one of the first to be willing to be photographed wearing a mask and to put a mask on at press conferences. And I think that saved lives in our state," said Adler, pointing out that there was a time before Abbott called for mandatory masking.

Adler said once the governor mandated masks, the recovery "kicked into gear because the messaging was so unified and clear."

Mayor Margo says all 6 mayors on the call sent letters asking for a mandatory mask mandate earlier in the pandemic.

Adler also spoke about the economic impacts that came with COVID-19, as did the other mayors. He estimated Austin is down $60 million to $80 million this fiscal year going into the next fiscal year.

"But part of the economic impact is the losses that will never come back," said Adler. "We're losing restaurants and bars, folks in the hospitality industry that are not going to be able to survive."

Mayor Turner says Houston had a $162 million budgetary shortfall. He says, agreeing with Price, that this isn't a one year issue. They'll be dealing with this the next couple of years.

Adler discussed the budget cuts that have made national headlines.

"We didn't redirect $150 million out of policing functions. We moved $20 million, but I found really quickly that some of my more progressive members of my council really wanted the message that we had cut $150 and some of my Republican constituents wanted the same thing," said Adler.

Smith asked if it's a characterization to say that Austin defunded the police, as Adler sees it.

"Not only as I see it, but as an objective fact, that's a characterization," said Adler.