The governor is emphasizing that everyone should wear masks and stay home if possible, 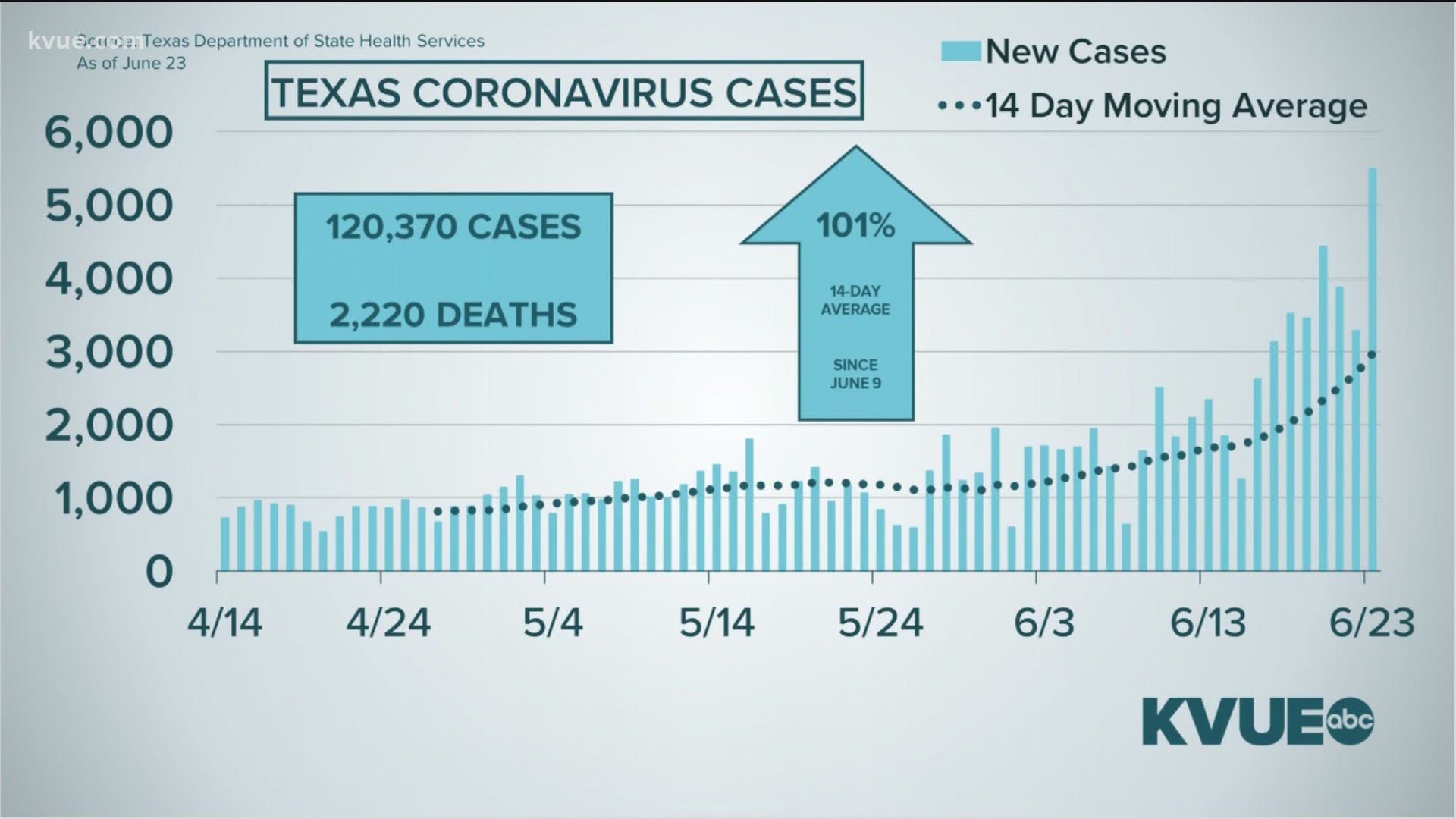 AUSTIN, Texas — Republican Gov. Greg Abbott said Tuesday that Texas has surpassed 5,000 new coronavirus cases in a single day for the first time, another troubling milestone as the largest pediatric hospital in the U.S. begins taking adult patients to free up bed space in Houston.

The announcement comes days after Texas eclipsed 4,000 new cases for the first time just last weekend. Dr. Anthony Fauci, the nation's top infectious disease expert, told lawmakers in Washington on Tuesday that “the next couple weeks are going to be critical” in Texas and other states that are trying to curtail an alarming spike in new cases.

"We want to make sure that everyone reinforces the best safe practices of wearing a mask, hand sanitization, maintaining safe distance, but importantly, because the spread is so rampant right now, there’s never a reason for you to have to leave your home," Abbott said during an early-afternoon interview with KBTX-TV in Bryan. "Unless you do need to go out, the safest place for you is at your home."

“There remain a lot of people in the state of Texas who think that the spread of COVID-19 is not a challenge,” Abbott told KBTX. “The coronavirus is serious. It's spreading."

RELATED: Houston vaccine scientist: It's time to roll back the reopening to stop the spike in COVID-19 cases

He did not offer an exact number of new positive cases or tests in total, which were expected to be available later Tuesday. But Abbott on Monday underscored that the infection rate in Texas has doubled since late May to nearly 9 percent and that the state reached an 11th consecutive day of record COVID-19 hospitalizations with more than 3,700.

Abbott is now emphasizing face covering more strenuously than at any point he has during the pandemic. He has not taken new actions that many Democrats have called for - including making face covering mandatory - but hinted Tuesday that new measures could be coming.

Abbott has stressed that Texas still has plenty of hospital beds, but some of the state's largest medical centers are starting to carve out new spaces to manage rising caseloads. Texas Children’s Hospital, the largest pediatric hospital in the United States, said Tuesday it was admitting adult patients across its campuses to free up more hospital bed space in the Houston area.

RELATED: Fauci hopeful for COVID-19 vaccine by end of the year or early 2021

The number of COVID-19-positive hospital patients in Harris County, which encompasses Houston, has nearly tripled since May 31.

“Our power on the local level was stripped away and we started opening up,” Mayor Sylvester Turner said Monday. “I said two months ago I thought we were moving too quickly, too fast, and now we find ourselves where we are today.”

In another development, the Texas Juvenile Justice Department said late Monday that a youth at the Giddings State School tested positive for COVID-19, marking the first confirmed case of the virus at a Texas juvenile detention facility.

For most people, the coronavirus causes mild or moderate symptoms that clear up within weeks. But for others, especially older adults and people with existing health problems, the highly contagious virus can cause severe illness, including pneumonia, and be fatal.