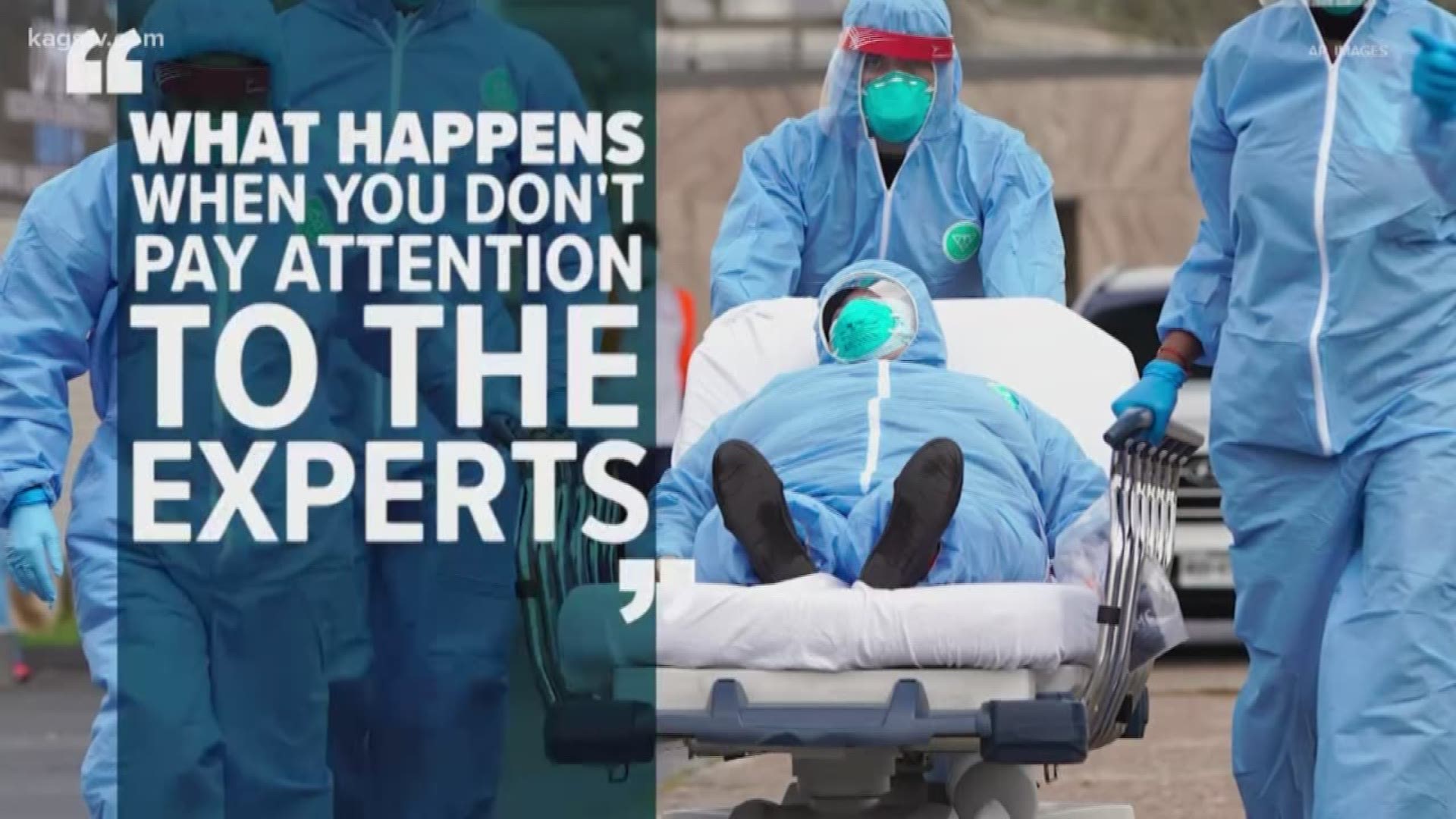 HOUSTON — As stay-at-home orders and quarantines are keeping workers home, furloughed, laid off or temporarily unemployed, Texans worry about the future of the economy.

“We haven’t experienced this much of a decline in employment in such a short period of time almost in the last century,” said economist Raymond Robertson. “This is really historically significant.”

“We could be seeing a drop in economic activity in the second quarter for not just Texas, but also for the United States, as much as 24 percent,” Robertson said.

In his work, Robertson focuses on the labor market and the economy, how international trade and economic events affect the labor market in particular. When Robertson spoke to KHOU11 via Zoom, he was in St. Paul, Minn., waiting for travel restrictions to be lifted to come back to College Station.

“Unemployment claims are reaching record levels,” Robertson said. “We’ve seen a spillover effect throughout the state. I’ve been looking at a number of different projects and different scenarios and obviously the longer we stay at home, the more difficult the economic situation may be.”

Robertson said he was in no way advocating for people to prematurely return to work or ignore stay-at-home orders.

“Obviously, if we don’t stay at home, and we go back into the workplace, it’s a very real risk of overwhelming our medical facilities in ways that would result in many more deaths,” Robertson said. “We really probably should be staying at home and getting some support from the Federal Government in order to ease that pain on income.”

RELATED: How to make sure you actually get your coronavirus stimulus check

RELATED: Will you get a stimulus check if you receive Social Security or disability, or didn’t file a tax return?

Robertson said so far, Texas has fared better than some other states when it comes to the economic fallout from COVID-19.

“If you look at Texas unemployment, for example, the increase in jobless claims in Texas went up from about 16,000 to about 155,000. That's actually proportionately a much smaller drop than we saw in the rest of the country,” Robertson said. “And a lot of that has to do with the diversification of the economy.”

“There's a lot of new employment opportunities that are now going to appear as a result of new technology,” he said. “Taking advantage of the time at home to get familiar with new technology, get familiar with online marketing or online web-based services or databases to really shore up those skills. There's lots of online instructional materials that people can do to really make sure they diversify their skills and their marketability. It's really a great opportunity in a way to kind of go back to school and start learning some new skills that might be helpful in the new market.”

Robertson said he hoped that by fall or middle of summer, things will start getting back to normal.

“If I was to offer some lessons from this,” he said. “I think the real question is which experts are we going to ignore next? I mean, we've already we had a lot of predictions that this was coming, and we didn't act in time. We didn't respond until we felt it was a crisis. So as a country, we need to start taking experts a lot more seriously in terms of other issues. Whether or not it's the economic effects of the U.S. federal debt or whether it's climate change. I think we need to rethink some of the warnings that people have been offering about the situation that we see coming. And this offers a great example of what happens when you don't pay attention to the experts and you don't prepare.”

“I think we’re going to see a boom after [we] take care of the disease,” Robertson said. “So just hang on for now. Things are going to get a lot better.”

The symptoms of coronavirus can be similar to the flu or a bad cold. Symptoms include a fever, cough and shortness of breath, according to the Centers for Disease Control. Some patients also have nausea, body aches, headaches and stomach issues. Losing your sense of taste and/or smell can also be an early warning sign.

Most healthy people will have mild symptoms. A study of more than 72,000 patients by the Centers for Disease Control in China showed 80 percent of the cases there were mild.

But infections can cause pneumonia, severe acute respiratory syndrome, kidney failure and even death, according to the World Health Organization. Older people with underlying health conditions are most at risk for becoming seriously ill. However, U.S. experts are seeing a significant number of younger people being hospitalized, including some in ICU.

The CDC believes symptoms may appear anywhere from two to 14 days after being exposed.

Human coronaviruses are usually spread through...

Help stop the spread of coronavirus